The 10 Most Important Theories About Why We Make War 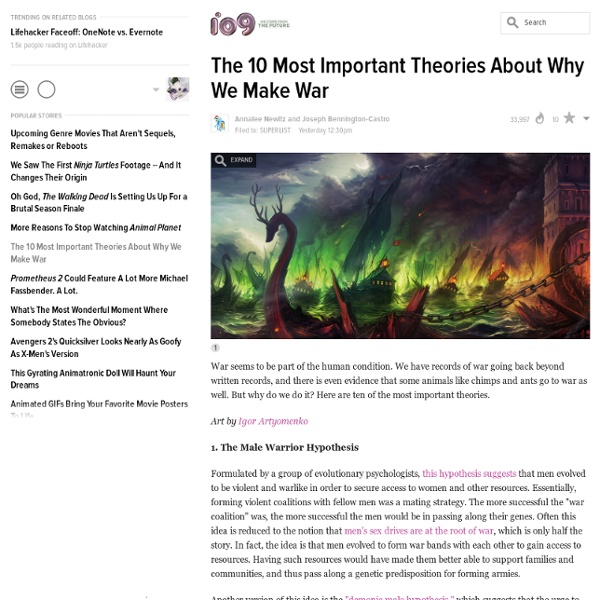 I'm very disappointed, though not surprised, at this analysis. I don't fault the author, but rather the inherent bias of the academic fields involved. Most of these items help explain how people are exploited in order to support war, but none offer the main motivation for war: the health of the state. Government is not somehow the pooling of community resources for the common good under the supervision of society's best and brightest. This is worthless propaganda of the same sort as war propaganda itself, and is well explained by the points listed in the article. Politics is an arrangement by which the most ruthless and violent factions in a socio-cultural environment consolidate their power and violence to gain beneficial economic advantages. Malthusian pressure has nothing to do with war as a direct cause. And, to finish the thought, if there was true Malthusian pressure that social and technological innovation couldn't solve, then the result would be migration. Related:  War Machine

Soldier Andrew Garthwaite's mind-control bionic op 25 January 2012Last updated at 12:00 By Sharon Barbour BBC News, Vienna The soldier went to Austria for the first stage of the process to fit him with a bionic arm As the first British serviceman injured in battle to use a new bionic arm, Cpl Andrew Garthwaite's story has already been remarkable. But this week he underwent six hours of surgery at a hospital in Austria at the start of a process to make it even more so - to prepare him to be fitted with an arm he will be able to control with his brain. The 24-year-old, from South Tyneside, was badly injured in Helmand, Afghanistan, in September 2010 when a Taliban rocket-propelled grenade took off his right arm and killed one of his comrades. He first had to learn how to carry out everyday tasks with one arm but was delighted to learn he would have one of the latest models of bionic arms fitted. He could hold a beer and do basic tasks. A technician then designed a new arm so he could ride his motorbike. Rewire nervous system 'Difficult surgery'

Mean world syndrome "Mean world syndrome" is a term coined by George Gerbner to describe a phenomenon whereby violence-related content of mass media makes viewers believe that the world is more dangerous than it actually is. Mean world syndrome is one of the main conclusions of cultivation theory. Gerbner, a pioneer researcher on the effects of television on society, argued that people who watched a large amount of television tended to think of the world as an intimidating and unforgiving place. A direct correlation between the amount of television one watches and the amount of fear one harbors about the world has been proven. [1] The number of opinions, images, and attitudes that viewers tend to form when watching television will have a direct influence on how the viewer perceives the real world. Gerbner says that the spread of the syndrome has become more intense over time. Mean world syndrome can result in counter-productive behaviour. See also[edit] References[edit]

How Covert Agents Infiltrate the Internet to Manipulate, Deceive, and Destroy Reputations One of the many pressing stories that remains to be told from the Snowden archive is how western intelligence agencies are attempting to manipulate and control online discourse with extreme tactics of deception and reputation-destruction. It’s time to tell a chunk of that story, complete with the relevant documents. Over the last several weeks, I worked with NBC News to publish a series of articles about “dirty trick” tactics used by GCHQ’s previously secret unit, JTRIG (Joint Threat Research Intelligence Group). By publishing these stories one by one, our NBC reporting highlighted some of the key, discrete revelations: the monitoring of YouTube and Blogger, the targeting of Anonymous with the very same DDoS attacks they accuse “hacktivists” of using, the use of “honey traps” (luring people into compromising situations using sex) and destructive viruses. Other tactics aimed at individuals are listed here, under the revealing title “discredit a target”:

Facial discrimination In a world obsessed with beauty, living with a facial disfigurement can be hard. Neil Steinberg explores the past and present to find out what it’s like to look different. “Take your ear off for me, please,” Rosie Seelaus says to Randy James, who is sitting on a black exam chair in a special room designed for viewing colours in the Craniofacial Center on the Near West Side of Chicago. He reaches up and detaches his right ear, which she created for him out of silicone seven years before. James is a doctor with the Department of Veterans Affairs in Las Vegas – the fierce desert sunlight is also tough on his prosthetic ear. “I used to tell bullies I was mauled by a tiger at the zoo,” he says. The first time I walked through the corridors of the Craniofacial Center, on the University of Illinois at Chicago’s medical campus, I had to sit down. And that was before meeting any patients. That was 15 years ago. “I felt helpless,” my mother told me, years later. Adults were another matter.

Neuro-enhancement in the military: far-fetched or an inevitable future? | Science About five years ago, not long after I started up my research group at Cardiff University, something rather strange happened. One morning I came down to my lab to find the door wide open and a suited man standing in the middle of the room, peering around and scribbling on a clipboard. He told me he worked for a private defence firm who were interested in applications of my research on human brain stimulation. Thinking about it afterward, something about the encounter chilled me. Five years later, brain stimulation research has moved far and fast. Different forms of neurostimulation in humans have now been shown to boost our ability to learn and perform motor actions, to pay attention to events in the environment, to recall information in memory, and to exercise self-control. Most of these findings stem from two basic forms of brain stimulation. The second major approach, called transcranial direct current stimulation (or TDCS), works quite differently.

More Than Half Of American Schoolchildren Now Live In Poverty For the first time, more than half of U.S. public school students live in low-income households, according to a new analysis from the Southern Education Foundation. Overall, 51 percent of U.S. schoolchildren came from low-income households in 2013, according to the foundation, which analyzed data from National Center for Education Statistics on students eligible for free or reduced-price lunches. Eligibility for free or subsidized lunch for students from low-income households serves as a proxy for gauging poverty, says the foundation, which advocates education equity for students in the South. The report shows the percentage of schoolchildren from poor households has grown steadily for nearly a quarter-century, from 32 percent in 1989. "By 2006, the national rate was 42 percent and, after the Great Recession, the rate climbed in 2011 to 48 percent," says the report. “The fact is, we’ve had growing inequality in the country for many years,” McGuire said.

43 Books About War Every Man Should Read Editor’s Note: This is a guest post from Ryan Holiday. War is unquestionably mankind at his worst. Yet, paradoxically, it is in war that men — individual men — often show the very best of themselves. I am not a soldier. The greats have been writing and reading about war — its causes, its effects, its heroes, its victims — since the beginning of written text. The study of war is the study of life, because war is life in the rawest sense. As Virgil put it, “the sword decides all.” This is a post about the canon of books about war. I’m certainly not recommending every book about war ever written, or even every book I’ve read on the subject, but instead a collection of the most meaningful. Note: I have them roughly organized by chronology and era but feel free to skip around. There’s no question it is a good thing a full generation has passed in the West without requiring the majority of young people to feel the full brunt of war. They may rear their ugly head tomorrow.

Genetic sexual attraction Genetic sexual attraction (GSA) is sexual attraction between close relatives, such as siblings or half-siblings, a parent and offspring, or first and second cousins, who first meet as adults.[1] The term was coined in the US in the late 1980s by Barbara Gonyo, the founder of Truth Seekers In Adoption, a Chicago-based support group for adoptees and their new-found relatives.[2] Contributing factors[edit] Heredity produces substantial physical and mental similarity between close relatives. For the above reasons, genetic sexual attraction is presumed to occur as a consequence of genetic relatives meeting as adults, typically as a consequence of adoption. Instances[edit] A brother and sister couple in Germany, Patrick Stübing and Susan Karolewski, fought their country's anti-incest laws. A couple in South Africa who had been together for five years had a child and discovered that they are brother and sister just before their wedding. In fiction[edit] See also[edit] Notes[edit] References[edit]

Military Must Prep Now for 'Mutant' Future, Researchers Warn | Danger Room Lockheed Martin tests its Human Universal Load Carrier exoskeleton. Photo: Lockheed Martin The U.S. military is already using, or fast developing, a wide range of technologies meant to give troops what California Polytechnic State University researcher Patrick Lin calls “mutant powers.” But the risk, ethics and policy issues arising out of these so-called “military human enhancements” — including drugs, special nutrition, electroshock, gene therapy and robotic implants and prostheses — are poorly understood, Lin and his colleagues Maxwell Mehlman and Keith Abney posit in a new report for The Greenwall Foundation (.pdf), scheduled for wide release tomorrow. If we don’t, we could find ourselves in big trouble down the road. “With military enhancements and other technologies, the genie’s already out of the bottle: the benefits are too irresistible, and the military-industrial complex still has too much momentum,” Lin says in an e-mail. The ethical concerns certainly have precedent.