The Fascinating Neuroscience Of Color 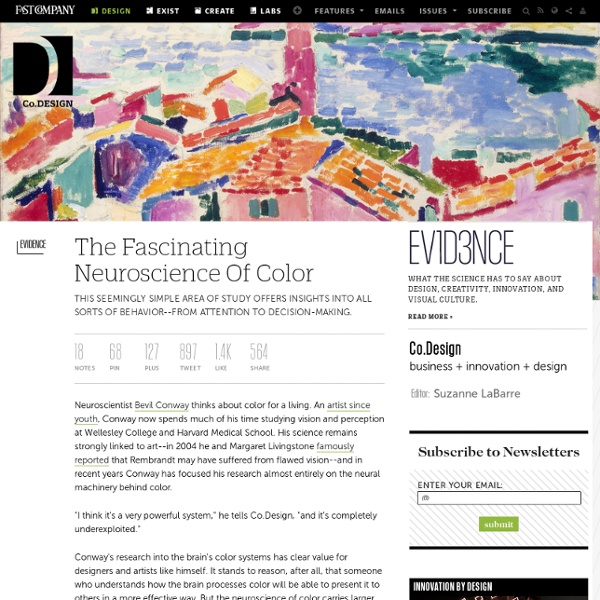 Neuroscientist Bevil Conway thinks about color for a living. An artist since youth, Conway now spends much of his time studying vision and perception at Wellesley College and Harvard Medical School. His science remains strongly linked to art--in 2004 he and Margaret Livingstone famously reported that Rembrandt may have suffered from flawed vision--and in recent years Conway has focused his research almost entirely on the neural machinery behind color. "I think it's a very powerful system," he tells Co.Design, "and it's completely underexploited." Conway's research into the brain's color systems has clear value for designers and artists like himself. It stands to reason, after all, that someone who understands how the brain processes color will be able to present it to others in a more effective way. Step back for a moment to one of Conway's biggest findings, which came while examining how monkeys process color. Emotions are just the start. That's not all.

Color Theory for Designers, Part 1: The Meaning of Color Color in design is very subjective. What evokes one reaction in one person may evoke a very different reaction in somone else. Sometimes this is due to personal preference, and other times due to cultural background. Color theory is a science in itself. Studying how colors affect different people, either individually or as a group, is something some people build their careers on.

It’s probably a myth that we’re not getting enough sleep We’ve been told that the modern, connected life is taking a toll on our sleep. Compared to previous generations, studies report, we’ve been sleeping less and less every year. And that is making us “more likely to suffer from chronic diseases such as hypertension, diabetes, depression, and obesity, as well as from cancer, increased mortality, and reduced quality of life and productivity.” It sounds terrifying, but it’s probably not true. For a long time doctors and scientists had ignored sleep’s importance to health. We’ve only begun to see how much it matters in the last few decades.

How Many Brands’ Distinct Shades of Blue Can You Correctly Identify? Feeling blue? Good--because that’s the kind of mindset you’ll need to play Name That Blue, a simple game that not only reveals how many companies prefer that particular hue, but also your perhaps unrealized ability to distinguish between them. Created by web developer Colin Gourlay, Name That Blue is a testament to your investment in the brands that wallpaper your world. If you are able to distinguish Facebook-sapphire from IBM-azure, then you are either incredibly observant or around these particular shades so often that they’ve seeped into subconscious associations.

Wanna be a Superhero? Get Night Vision Injected in Your Eyeballs More news from the Didn’t See That One Coming bureau: A group of independent researchers announced this week that they’ve successfully induced night vision in a human test subject by injecting a liquid solution directly into the eyeball. Science for the Masses, a biohacker group based out of California, published an open-source research document detailing the experiment. The night-vision solution included a substance called Chlorin e6 (Ce6), found in some deep-sea fish, which has light-amplifying properties and has also been used for certain cancer treatments. T-Ray Goggles Could See Through Walls And Skin In a rather squirm-inducing description over at Science.Mic, it appears the researchers used a kind of miniaturized turkey baster to inject the Ce6 into the eyeballs of volunteer test subject Gabriel Licina, a biochemical researcher with the group. Specifically, the substance was dripped into the conjunctival sacs, which transmitted the Ce6 to Licina’s retinas.

A Bible Of Color Theory Is Now An App Josef Albers, one of the best-known painters and educators to emerge from the German Bauhaus, wrote Interaction of Color in 1963, and it’s remained an art and design bible ever since. Last week, to commemorate the book’s 50th anniversary, Yale University Press released the Interaction of Color app for the iPad, a modernized, interactive presentation of Albers’s teachings. With fingers instead of paintbrushes and a touch screen instead of paper, users can move and manipulate over 125 color plates in 60 interactive studies. Alcohol: An Astonishing Molecule Editor's Note: The following is the introduction to the March 2015 issue of Scientific American Classics: Intoxicating: The Science of Alcohol Alcohol has long perplexed our species. Wherever we look in the ancient or modern world, people have shown remarkable ingenuity in discovering how to make fermented and distilled beverages and in incorporating them into their cultures.

Color Psychology of Logo Design by COLOURlovers Anything related to color and psychology tends to fascinate me. Why do certain colors have certain meanings? Why do certain companies choose certain colors to represent their brand? I recently found an infographic that delves into the psychology of why companies choose colors for certain elements of their brand, like their logos. Nowhere Citizens: Through Science and Technology, We Will Evolve! To be able to achieve this type of communication we resort to the use of communication technologies, usually in the form of physical objects (e.g. photographs, paintings, books). Most of these objects have common characteristics that change how time and space are experienced: temporality, spatiality and mobility. For example, a photograph is a view of the past. It can present something from the other side of the world, and we can take it with us easily. From the historical roles, which mechanical clocks played in the past, we can reasonably infer that computers have an equivalent potential to affect contemporary society in terms of time (Lee & Liebenau, 2000).

Why Is Facebook Blue? The Science Behind Colors In Marketing Editor's Note: This is one of the most-read leadership articles of 2013. Click here to see the full list. Why is Facebook blue? According to The New Yorker, the reason is simple. Color Trend: Neon by COLOURlovers Are the 80s really back? It seems like neon is all over the place these days, and I'm loving the bright and bold colors as we approach summer. Check out these awesome neon color inspirations: