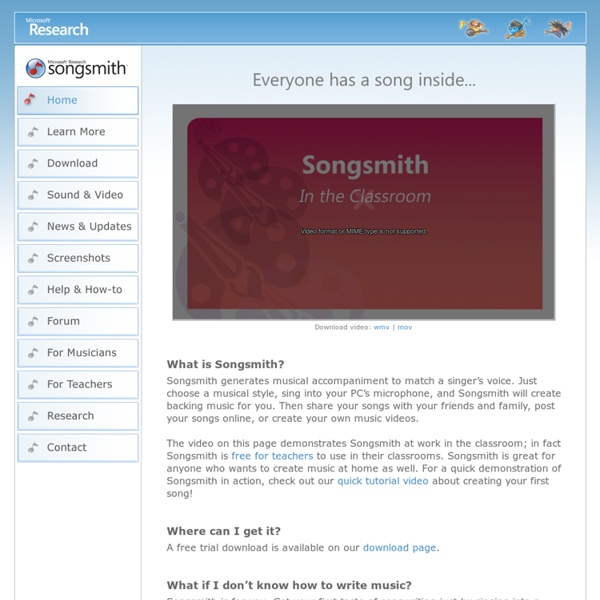 What is Songsmith? Songsmith generates musical accompaniment to match a singer’s voice. Just choose a musical style, sing into your PC’s microphone, and Songsmith will create backing music for you. Then share your songs with your friends and family, post your songs online, or create your own music videos. The video on this page demonstrates Songsmith at work in the classroom; in fact Songsmith is free for teachers to use in their classrooms. Where can I get it? A free trial download is available on our download page. What if I don’t know how to write music? Songsmith is for you. What if I do know how to write music? Songsmith is for you too. Related:  Applicazioni

How-To: Easily Remove the Vocals from Most Songs | r3dux.org 2015 Shortcut: When I wrote this article Audacity didn’t have an automatic center-panned vocal canceling effect… but now it does, so rather than do the stereo-separate / invert-one-track / play-both-as-mono trick (and that’s pretty much all there is to it), you should be able to find the Vocal Remover option in the Effects menu – but it’s more fun / interesting and can give better results if you do it yourself! =D I found this trick the other day whilst stumbling the Interwebs and thought I’d do a quick-write up w/ pictures to make it as easy as possible… For this exercise we’re going to be using a piece of free audio software called Audacity, which you can get for Linux, Windows and Mac. Update: If you’re trying this out on a Mac, please make sure you get Audacity 1.3 Beta or newer – the stable 1.2 version appears to have a missing equaliser decibal-range slider which you need towards the end of the process! 1.) 2.) 3.) With that done, give it a play and see what happens! 4.) 5.) Wrap Up

Parcours Technology | Video websites &#039;must vet content&#0 YouTube has been criticised by MPs, who say it must do more to vet its content. In a review of net safety, the Culture, Media and Sport select committee said a new industry body should be set up to protect children from harmful content. It also said it should be "standard practice" for sites hosting user-generated content to review material proactively. YouTube's owners said the site had strict rules and a system that allowed users to report inappropriate content. The committee also wants a rethink on how best to classify video games - but there is disagreement over who should run the new ratings system. MPs say the same body which gives age ratings to films - the British Board of Film Classification - should be in charge, but the games industry supports its own voluntary code. Effective In its report, the committee said that some websites it had monitored as part of its review had a "lax" approach to removing illegal content. Dark side This approach is completely wrong.

MOG Launches Ad Network, Columbia Records Exec Joins Board Mog, a platform for music blogs with backing from Universal and Sony BMG, is launching an ad network dubbed MOG Music Network. In conjunction with the announcement, MOG is also adding experienced record producer Rick Rubin to its Board of Directors. MOG Music Network will allow partner blogs to embed widgets that display content from other blogs, and will also allow bloggers to have their own posts syndicated to Mog.com. The network will also allow bloggers to customize the ads that appear on their sites, and to generate revenues greater than what they’d get from a typical ad network like Google AdSense. MOG Music Network, which CEO David Hyman has described as a “Federated Media for music sites”, will include 30 partner sites at launch. MOG’s network will allow it to increase its ad impressions to drive further revenue (up until this point, its primary source of income has been from direct visits to its site).

Take an MP3 File and Delete the Words to Create Karaoke Edit Article Remove Vocals YourselfFind Instrumental Versions Edited by Fadil Khan, Zack, Caligari_87, Jen and 46 others Do you need music for your Karaoke party, or just want to sing along to your favorite song without those pesky singers getting in your way? Ad Steps Method 1 of 2: Remove Vocals Yourself 1Get the music you want to sing to. 10Using the track menus, change each track to “Mono.” Method 2 of 2: Find Instrumental Versions 1Go to any search engine, like Google. Tips This process works by canceling out all the information in the exact center of a stereo recording, through phase Inversion. Warnings When downloading MP3s, make sure they're legal and virus free. Things You'll Need Audio editor such as AudacityA copy (MP3/OGG/WAV) of the song you want

Kongregate: Play free games online Neil Young Announces Collected Work With Dynamic Updates from th I'm here at the JavaOne conference in San Francisco where Neil Young, legendary rocker and the provider of the soundtrack to my early 20's, is announcing a very cool project with Sun Microsystems. For the first time, Young's entire collection of published media will be available for purchase, beginning today with the first of five volumes. Young's collected works after more than 40 years of making music and film would be a massive enough project - but the most interesting part of the announcement is that the media will be delivered on Blu-ray Disks that will check for updates when new content is available and download it to your local device. See also our interview with Neil Young, done after his keynote presentation. New media of all sorts will be added to the collection over time; Young encouraged the use of the PS3 gaming device as the optimal way to capture and enjoy the collection. Continued below Blu-ray The Conference