How Big Is Space – Interactive version 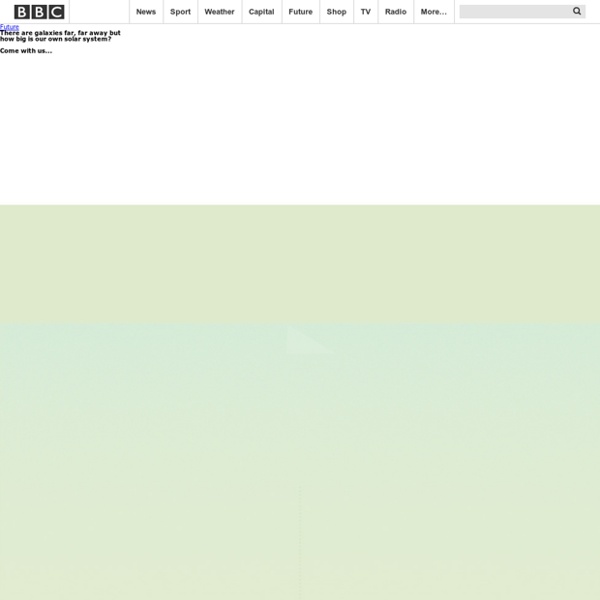 Magnifying the Universe Embed this infographic on your site! <iframe width="500" height="323" scrolling="no" src=" frameborder="0" allowfullscreen></iframe><br />Copyright 2012. <a href=" the Universe</a> by <a href=" Sleuth</a>. The above is an interactive infographic. Introduction: This interactive infographic from Number Sleuth accurately illustrates the scale of over 100 items within the observable universe ranging from galaxies to insects, nebulae and stars to molecules and atoms. While other sites have tried to magnify the universe, no one else has done so with real photographs and 3D renderings. We hope you have a blast magnifying the universe, know that each time you zoom in a depth, you're magnifying the universe 10x ... and every time you zoom out, the bigger objects are 1/10th of their prior size. How To Use: Credits:

The Planets Today : A live view of the solar system Solar System Scope Your Age on Other Worlds Want to melt those years away? Travel to an outer planet! <div class="js-required"><hr> This Page requires a Javascript capable browser <hr></div> Fill in your birthdate below in the space indicated. The Days (And Years) Of Our Lives Looking at the numbers above, you'll immediately notice that you are different ages on the different planets. The earth is in motion. The top-like rotation of the earth on its axis is how we define the day. The revolution of the earth around the sun is how we define the year. We all learn in grade school that the planets move at differing rates around the sun. Why the huge differences in periods? Johannes Kepler Tycho Brahe Kepler briefly worked with the great Danish observational astronomer, Tycho Brahe. Here you see a planet in a very elliptical orbit. Kepler's third law is the one that interests us the most. Let's just solve for the period by taking the square root of both sides: The Gravity Of The Situation Isaac Newton ©2000 Ron Hipschman

The Milky Way Project Across Our Blogs: Mars Curiosity Rover Moonrise, New Rover, Billion Pixel Marsscape Seems the Mars Curiosity Rover has been a busy little six-wheeled fellow these past few weeks. Here's a roundup of news related to the rover, from top Technorati listed science blogs... From ArsTechnica - Curiosity rover shoots video of Martian moonrise - NASA released a time-lapse video of the Martian moon Phobos, as it ascends into view. From GizMag - Curiosity begins long trek to uncover Red Planet's secrets - the rover has begun a multi-month journey to Mount Sharp, where it will dig in to find signs of past life. From The Huffington Post - Mars Water? From Engadget - NASA makes billion-pixel Mars panorama out of photos captured by Curiosity - NASA stitched together almost 900 images to create a 1.3 billion pixel landscape panorama of the Mars surface, as taken by the Mars Curiosity Rover. Does the Curiosity Rover still hold your attention, as it continues to send back images and information from our distant planetary neighbor? image credit: NASA/JPL

collect space space history and space artifacts news Long before the first Instagram from space, the first check-in from orbit, or even the first astronaut's tweet, John Glenn sent an email to Bill Clinton. The reply it prompted was the very first email transmitted by a sitting U.S. president — it just happened to be to space. April 18, 2014SpaceX launches science-packed Dragon capsule on space station supply run A commercial cargo spacecraft loaded with more than two tons of scientific experiments and equipment lifted off for the International Space Station on April 18, after more than a month of delays. SpaceX's Dragon launched on a Falcon 9 rocket from Cape Canaveral. April 17, 2014John Houbolt, NASA engineer who fought for Apollo moon landing method, dies Were it not for John C. April 14, 2014NASA signs over historic Launch Pad 39A to SpaceX One of NASA's most historic launch pads is now under new management. April 9, 2014Houston, we've got an auction: Apollo 13 astronaut's mementos to be sold

DeepAstronomy.com Universe Today — Space and astronomy news The Falcon 9 and Dragon capsule stand ready for launch prior to the detection of a helium leak in one of the engines forcing a scrub of the launch attempt on April 14. 2014 – now reset to April 18, 2014. Credit: nasatech.net NASA and SpaceX are marching forward towards a Friday, April 18 liftoff attempt for the Falcon 9 rocket sending a commercial Dragon cargo craft on the company’s third resupply mission to the International Space Station following the scrubbed launch attempt on Monday, April 14 – forced by the discovery of a Helium gas leak inside the rocket during the latter stages of the countdown. An on time blastoff of the upgraded Falcon 9 sets the stage for an Easter Sunday rendezvous and berthing of the Dragon resupply spacecraft at the massive orbiting outpost packed with almost 5000 pounds of science experiments and supplies for the six person crew. However the weather prognosis is rather [click to continue…] The newly-confirmed extrasolar planet has been dubbed Kepler-186f.

Beyond 2012: Why the World Didn't End Beyond 2012: Why the World Didn't End If you're reading this story, it means the world didn't end on Dec. 21, 2012. Despite reports of an ancient Maya prophecy, a mysterious planet on a collision course with Earth, or a reverse in Earth's rotation, we're still here. The Mayan connection "was a misconception from the very beginning," says Dr. Video: Why The World Didn't End Yesterday For years leading up to the supposed apocalypse, NASA scientists worked to dispel the myths and answer questions on a host of 2012 topics: Question (Q): Are there any threats to the Earth in 2012? Answer (A):The world will not end in 2012. Q: What is the origin of the prediction that the world will end in 2012? A: The story started with claims that Nibiru, a supposed planet discovered by the Sumerians, is headed toward Earth. Q: Does the Mayan calendar end in December 2012? Video: NASA Scientist David Morrison Debunks the Myths Q: Is NASA predicting a "total blackout" of Earth on Dec. 23 to Dec. 25?