50 Viral Images (and how they spread) 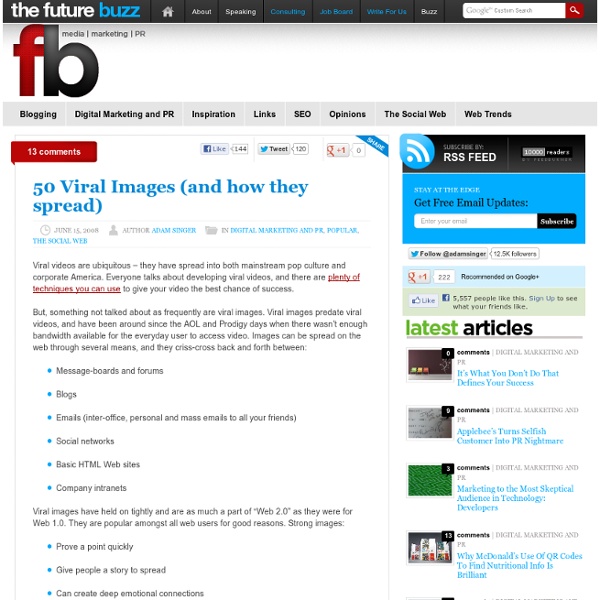 Viral videos are ubiquitous – they have spread into both mainstream pop culture and corporate America. Everyone talks about developing viral videos, and there are plenty of techniques you can use to give your video the best chance of success. But, something not talked about as frequently are viral images. Message-boards and forumsBlogsEmails (inter-office, personal and mass emails to all your friends)Social networksBasic HTML Web sitesCompany intranets Viral images have held on tightly and are as much a part of “Web 2.0” as they were for Web 1.0. Prove a point quicklyGive people a story to spreadCan create deep emotional connectionsAre easily consumable, perfect for a medium that moves fastAre entertaining, hilarious or compellingAre easy to share Websites like Flickr, Slide and Photobucket have made the sharing of photos and images simple for everyone and enabled people to create “lifestreams” of their daily activities through photo journals on the web. Anyway, on with the show. Irony Related:  Data visualization, infografica, mindmapping

50 Viral Images Part Two My original 50 viral images (and how they spread) post turned out to be extremely successful and was read quite a few times to say the least. I was surprised so many people were interested as the images in there had already been passed around social media to death. With that said, I failed to consider most people don’t spend nearly as much time on the web as I do. Seeing as the first viral images post was published June 15, 2008 we’re passed due for a fresh one. Again, as I said in the previous post: Unfortunately due to the nature of images on the web (images being copied, posted without attribution, shared via email and public hosting services, being submitted anonymously, rexmied, etc.) it is difficult for me to give proper attribution of these images. Images are perhaps the most powerful form of content to spread on the web due to their portability, instant gratification, and impact. Infographics, charts and graphs: found via monster-munch.com credit: David Armano via Neatorama PC > Mac:

50 Viral Images The Web Shared In 2009 If you’re new to this blog, start by checking out: All caught up? Great – on to part 3. Good visuals help marketers, bloggers and anyone with ideas communicate them quickly. They tell the story faster than text and feed into the web’s fast-past culture of real-time sharing due to their instant gratification. Viral images are one of the oldest content archetypes on the web, yet are set on fire by new social tools and continue to proliferate – with the most interesting ones still being shared like crazy. Email, Twitter, blogs, forums and everything in between are used to share images. So to help you integrate imagery into what you do, I continue to document the images that go popular on larger web communities like Digg, Reddit and StumbleUpon (usually hosted on image sharing services like imgur/photobucket or are posted on a blog and then trickle down to Twitter, Facebook, email, etc – that’s generally the pattern although definitely not the rule). Charts/infographics Source: opinions? Humor

50 Clever And Creative Images The Web Shared In 2010 As someone interested in what we share and why, I’ve been aggregating images that go popular on the social web for the last 3 years. The methodology for how I put them together is simple. I’m a member of multiple social sharing communities and save the best images that go hot as-it-happens to later sort and aggregate for you here. There are a few reasons I’ve been doing this. One is I get feedback from readers saying they appreciate receiving a sampling of images shared throughout the year in one place (in case they missed some). The other is to help you – as someone interested in having your ideas shared. So if you’re new to this site (or this series) start by checking out the following posts (which also provide more analysis/commentary on trends in viral images): All caught up? Continuing this series – following are 50 more images the web shared in 2010 (part 5). Infographics, charts, and data visualizations I guess the answer is simple enough Facebook connections globally, visualized

A Collection of Printable Sketch Templates and Sketch Books for Wireframing At the beginning of a web (or application) development project I always create the sketches first. While sketching can be done on a blank paper, it’s much better to use a sketch template. For me that is the best and most productive way to work on and improve my ideas before application development begins (and things get more complicated :-)). This way I won’t pay too much attention to some details that should be taken care of later, but stay focused on general layout and functionality. Below you will find more than 20 resources that you can use in sketching phase of application development. And, of course, don’t forget to share your wireframes on I ♥ wireframes :-) Printable sketch templates for websites These are some pretty good, printable sketch templates for website design. Browser Sketch Pad (PDF) Browser Sketch Pad by Design Commission — see original source 960 grid template 960 grid template by Nathan Smith — see original source 960 Sketch PDF template Graph paper Paper browser Notepod

The Social Web In Pictures: 50 Viral Images Shared In 2011 I’ve documented images that get passed on socially here since 2008 (and have been sharing them personally around the web for over a decade). Images predate video yet continue to proliferate quicker due to their inherent instant nature. My methodology for gathering these is simple: it has to break the “hot” threshold on StumbleUpon, Reddit, Digg or some other community that includes diversity, aggregation and incentives. The social news sites don’t all keep their archives publicly available, so I feel it useful to keep a record. So if you’re new to this site (or this series) start by checking out the following posts in this series: All caught up? So what is the web sharing in 2011? Infographics, charts and graphs Well explained Everyone seems to get this wrong image credit: incompetech.com Makes sense to me image credit: Moritz Resl If you’re reading this, you should be thankful Indeed… Food for thought for publishers image credit: contently.com Cats…always just out of reach Done that… Sleeping fox

Pictogram rock posters This is my most ambitious, and maybe also the best, personal work I’ve done so far. I decided to pick a few bands and artists from the rock genre and make pictogram posters for them. Instead of just putting one single pictogram in each poster, like in my previous ‘Pictogram music posters’, I made as many as I could possibly come up with for each artist, and jammed them into one single poster. There is a total of 234 song pictograms in these posters. I started this project Jan 15th 2012, so I’ve been working on this for about five months. The bands and artists that I chose are: David Bowie, Bob Dylan, The Rolling Stones, Iggy Pop, The Beatles, Bruce Springsteen, Johnny Cash and Elvis Presley. A big thanks (as always) to The Noun Project. Thank you so much in advance, I hope you like my new project! Best, Viktor

50 (More) Viral Images The Web Shared In 2011 Images continue to be the web’s most underrated content format. And if anything, in 2011 we’ve seen the pace of image sharing continue to increase. I’m a fan of images in particular because of how simple they are both to pass on and manipulate: basically encouraging an ongoing story through a culture of remix. It’s why Imgur does more than a million visitors per month and startups like Canvas show great promise. With that said, readers here specifically are interested in seeing their ideas spread. So if you’re new to this site (or this series) start with the following posts: Keep these in mind when you scroll through the below, you’ll notice some clear archetypes. My methodology for gathering these is simple: it has to break the “hot” threshold on StumbleUpon, Reddit, Digg or some other community that includes diversity, aggregation and incentives. So, on with what’s hot. Infographics, charts, graphs Puts it in perspective nicely… Now that’s progress Looks like a good upgrade, sign me up

Information Is Beautiful | Ideas, issues, knowledge, data - visualized! 50 Viral Images The Web Shared In 2010 As a perpetual observer/analyzer of what people share and why, it’s fascinating to me to study content that spreads. As such, I document/bookmark much of the web’s hottest content for my own insight/analysis, but I also share with readers here too. Images have always been one of the most popular types of content on the web, (even through the popularization of video) and I’m always surprised more marketing and PR folk don’t actively use them as part of their content mixes. Anyway – to continue to spread inspiration, following are 50 images the web has shared in 2010 (likely not all created in 2010, but were shared this year). This is the 4th installment of this series, if you’re new to the blog check out the first three – as when taken together you’ll start to notice patterns in the web’s most shared images If you’re involved in any facet of content marketing, study the archetypes of popular images to gain an understanding of why certain images are sticky and others fall flat. Agreed…

Haiku Deck Clean Up Your Mess - A Guide to Visual Design for Everyone David Byrne’s Hand-Drawn Pencil Diagrams of the Human Condition by Maria Popova “Science’s job is to map our ignorance.” David Byrne may have authored both one of last year’s best albums and best music books, but he is also one of the sharpest thinkers of our time and a kind of visual philosopher. About a decade ago, Byrne began making “mental maps of imaginary territory” in a little notebook based on self-directed instructions to draw anything from a Venn diagram about relationships to an evolutionary tree of pleasure — part Wendy MacNaughton, part Julian Hibbard, yet wholly unlike anything else. In 2006, Byrne released Arboretum (UK; public library), a collection of these thoughtful, funny, cynical, poetic, and altogether brilliant pencil sketches — some very abstract, some very concrete — drawn in the style of evolutionary diagrams and mapping everything from the roots of philosophy to the tangles of romantic destiny to the ecosystem of the performing arts. Möbius Structure of Relationships Writing in the introductory essay simply titled “Why?