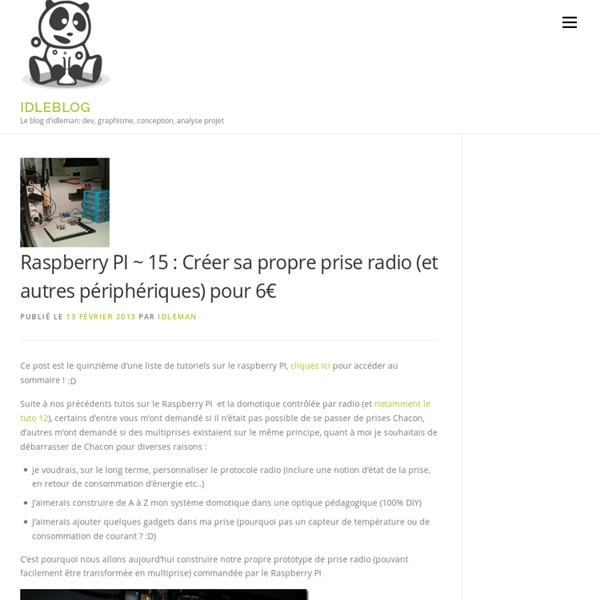 Capture IR and RF Capturing IR and RF Codes Understanding IR & RF Fundamentals Capturing any IR or RF code is trivial. All you need is an IR receiver or RF receiver, resistors to form a voltage divider, and a PC with a sound card with a line-in input. Build a Wi-Fi Drone Disabler with Raspberry Pi Photo by Mike Senese Please note: The information presented here is for educational purposes. As with all guides covering network and computer security, the techniques should only be performed on devices that you own or have permission to operate on. This tutorial is designed to help users understand the security implications of using unprotected wireless communications by exploring its use in a popular drone model: the Parrot AR.Drone 2.0.

A Multi-Protocol Infrared Remote Library for the Arduino Note for Arduino 1.0 An updated version with 1.0 support is available on github. Installation instructions are at the bottom of that page. Sniff and retransmit RF-signal Hi,I'm not quite sure it is possible but I would like to "sniff" a RF-signal from a remote control (that transmits on 433Mhz) and after the signal has been recorded, retransmit this signal later. I'm not familiar with the protocol of the remote control, but I'm not looking to decode the signal, just to transmit it again later. I have connected a RF-transmitter and a RF-receiver (like these: to a arduino board and I've built a simple "data logger". Then using the "read"-function I see a lot of interference but I can also see that when I press a button on the remote control, the arduino picks up the signal.

Raspberry Pi Webcam Over the Internet Using MJPG-Streamer – Jacob Salmela View your Raspberry Pi Webcam from anywhere. Connect to it from a unique domain name and check in on your house or pets while you are away. Materials Local networkMac or PCRaspberry Pi camera module, a Compatible Webcam (or the exact same one I used to write this tutorial)Raspberry Pi running Raspbian “wheezy”Domain nameRouter capable of supporting DynDNS, noip, or other dynamic DNS service; or a software-based dynamic DNS client (not covered in this walkthrough)lighttpd Web server running on the Pi (optional–allows your to embed a stream to a Webpage, which can be password-protected)HDMI Cable (*optional)Keyboard (*optional)Mouse (*optional)Monitor with HDMI input (*optional)*If the Raspberry Pi is set up as a headless machine, you will not need a monitor, keyboard, or mouse–just another computer, which would be used to access it remotely over the network via SSH.

How to control DI.O devices with a Raspberry In this post, I will explain or describe how to control DI.O (from Chacon) with a Raspberry Pi and some cheap component. Price: less than 90$ DI.O devices are produced by Chacon and allow to manage 220V device via radio transmission (433Mhtz). Sniffing the Air (RF controlled lights) Introduction I put some lights on timers whenever we travel. A few lights in the house are on permanent timers (I had bought Aube TI035/U timer switches for the outdoor lights – they work nicely), but most of the indoor lights only need to be on timers when we’re away. You can buy fancy digital temporary light timers, but we have the old mechanical types.

Wireless Raspberry Pi print server Wireless printing has made it possible to print to devices stored in cupboards, sheds and remote rooms. It has generally shaken up the whole process of printing and enabled output from smartphones, tablets, laptops and desktop computers alike. But you don’t have to own a shiny new printer for this to work; old printers without native wireless support don’t have to end up in the bin, thanks to the Raspberry Pi. The setup is simple. With your Raspberry Pi set up with a wireless USB dongle, you connect your printer to a spare USB port on the computer.