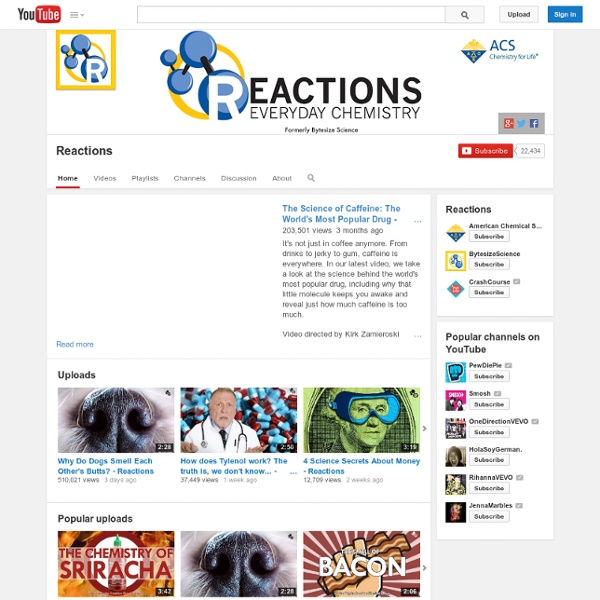 NakedScientists's Channel This item has been hidden Science from the Sporran Play all Whilst tidying the Naked Scientists' office the other week the team unearthed this rather extraordinary collection of video reels featuring experimental scientist, Dr Ernest Otherford. We suspect he may be an ancestor of our very own Dave Ansell. It seems our forerunner had a penchant for exploring the laws of physics and chemistry using whatever happened to be in his sporran... 2:41 2:34 2:42 2:46 1:36 3:07 2:34 3:21 3:47 2:31 2:55 This item has been hidden This item has been hidden 12 STEM Resources for Teachers According to the STEM (Science Technology, Engineering, and Math) Coalition, there are 26 million STEM jobs in the U.S., comprising 20% of all jobs. By 2022, there will be 9.2 million new STEM jobs in the U.S. Despite the need for these workers, only 45% and 30% of high school seniors are prepared for college-level math and science courses, respectively.

The Kids' Picture Show Looking for a kids' channel that's not too "kiddie?" Check out the Kids' Picture Show! Learn shapes, colors, numbers, the alphabet, communications skills and more with The Shapesters, Robot DJ, The Number Guys, My Fridge and the popular "What Shape Is It?" series. The Kids' Picture Show is an educational channel for toddlers, pre-schoolers, kindergarteners and elementary school-age students to learn language and life skills. Kids can explore speaking, listening and reading through poems, songs, flash cards, and lots of humorous videos.

Internet Catalogue If you think you are beaten, you are; if you think you dare not, you don't; if you like to win, but you think you can't it's almost certain you won't. Life's battles don't always go to the stronger or faster man, but sooner or later the man who wins is the one who thinks he can. "DON'T QUIT" Author Unknown When things go wrong, as they sometimes will. When the road you're trudging seems all up hill, When the funds are low, and the debts are high, And you want to smile, but you have to sigh, When care is pressing you down a bit, Rest if you must, but don't you quit. Life is queer with the twists and turns, As everyone of us sometimes learns, When he might have won had he stuck it out: Don't give up though the pace seems slow.

ladybirdbooks Kittie Lacey is The Fairytale Hairdresser and has a salon in the centre of Fairyland village. No locks are too wild for Kittie to tame! She's brave and adventurous and not afraid of wicked witches or evil queens. Fairytale Hairdresser and Beauty and the Beast is the spectacular seventh story in the series starring Kittie Lacey. The Big Bad Beast’s heart is melted by Bella, the most beautiful girl in Fairy Land – but could she ever love someone so beastly? The Fairytale Hairdresser teaches Beast that beauty is on the inside (although there’s always time to treat yourself to a little makeover!)

Closed Captioning in Google Slides Making Google Slides More Accessible with Closed Captioning Increase the accessibility of your presentions using Google Slides’ native Closed Captioning (CC) feature. Just as microphones in classroom are a boost to a range of students, not just those with hearing impairments, being able to see text to reinforce what a presenter is saying is a great way to help all students process information from slide shows. Turn on this feature when in “Present” mode by hovering over the presenter toolbar which will appear at the bottom. Click “CC” to toggle on or off. Check out this short video tutorial: Oddbods ► Meet the Oddbods! Play all Meet all of the Oddbods: Slick, Zee, Newt, Jeff, Fuse, Bubbles and Pogo! 1:28 1:27 1:28 1:28 1:25 1:22 1:33 This item has been hidden ► Newt Play all Adorably sweet; Newt is the youngest of the Oddbods by a whopping 3 days!

If atoms are mostly empty space, why do objects look and feel solid? Chemist John Dalton proposed the theory that all matter and objects are made up of particles called atoms, and this is still accepted by the scientific community, almost two centuries later. Each of these atoms is each made up of an incredibly small nucleus and even smaller electrons, which move around at quite a distance from the centre. If you imagine a table that is a billion times larger, its atoms would be the size of melons. But even so, the nucleus at the centre would still be far too small to see and so would the electrons as they dance around it.

Creating with Google Earth: 10 activities to try - Ditch That Textbook Google Earth calls itself "the world's most detailed globe." It's true! Zoom in to anywhere in the world. Tilt to see the elevation and buildings pop out of the ground. Click on locations to gather details.