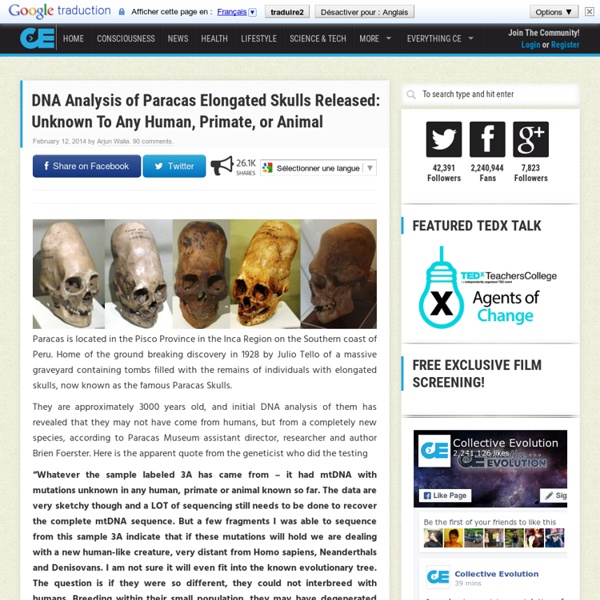 Paracas is located in the Pisco Province in the Inca Region on the Southern coast of Peru. Home of the ground breaking discovery in 1928 by Julio Tello of a massive graveyard containing tombs filled with the remains of individuals with elongated skulls, now known as the famous Paracas Skulls. They are approximately 3000 years old, and initial DNA analysis of them has revealed that they may not have come from humans, but from a completely new species, according to Paracas Museum assistant director, researcher and author Brien Foerster. Here is the apparent quote from the geneticist who did the testing “Whatever the sample labeled 3A has came from – it had mtDNA with mutations unknown in any human, primate or animal known so far. It’s always been thought that the skulls were a result of cranial deformation, where the head is bound or flattened to achieve the shape. “As I have said, deformation can alter shape, but not the volume of bone material, and certainly not twice as much. Sources: Related:  Prehistoric

Scientists Use Sound Waves To Levitate And Manipulate Matter A team of researchers in Switzerland have developed a way of levitating and transporting small objects using nothing but sound. Using ultrasonic waves that is, sound waves whose frequencies are too high for humans to hear, scientists at the Swiss Federal Institute of Technology in Zurich have made water droplets, instant coffee crystals, styrofoam flakes, and a toothpick, among other objects, hang in mid air, move along a plane, and interact with each other. It is the first time that scientists have been able to use sound to simultaneously levitate several objects next to each other and move them around. As anyone with a subwoofer and a teenager knows, sound waves exert pressure. In the past, scientists have been able to acoustically levitate bits of styrofoam and even small insects and fish. “Theoretically there’s no difference between theory and practice,” says engineer Daniele Foresti, the study’s lead author, in a phone interview.

Study confirms that Neanderthals and humans got it on The genetic similarities between certain human populations and Neanderthals are striking. Indeed, many researchers think the Europeans and Asians inherited between 1 and 4 percent of their DNA from Neanderthals, yet scientists have struggled to demonstrate with a high degree of certainty that these genetic similarities are the result of interbreeding between these two species. Now, a pair of European scientists say that they have confirmed the human-Neanderthal reproduction hypothesis using statistical modeling — and these results, the researchers add, should go a long way to change the way we think of other human-like species. In the past, genetic similarities between Neanderthals and humans have been associated with two possible scenarios. "A model that involves interbreeding is much more likely." "We did a bunch of math to compute the likelihood of two different scenarios," says Laurent Frantz, study co-author and evolutionary biologist at Wageningen University in the Netherlands.

Hibernating Alien discovered inside Secret Chamber in the Great Pyramid – Would you believe a story about an alien mummy being found in the Great Pyramid of Giza? In the March 2000 issue of the Egyptian magazine Rose al-Yūsuf, a strange article posed the same question. As the story goes, in the year 1988, a French Egyptologist named Louis Caparat was exploring the interior of the Great Pyramid when he accidentally discovered a secret chamber. The room had been sealed right after the pyramid was completed, more than 4,500 years ago, and it contained “a crystalline transparent case.” Apparently, the crystalline case served as life-support for a small humanoid alien or human-alien hybrid, which Caparat believed was hibernating or in a stage of suspended animation. Further inspection of the chamber revealed clues about the identity of its millennial occupant when archaeologists found a papyrus scroll. Shortly after his discovery, Caparat called his friend and colleague, biologist F. de Braga, who was in Spain at the time.

7 Drugs Whose Dangerous Risks Emerged Only After Big Pharma Made Its Money Have you ever noticed how warnings about dangerous prescription drugs always seem to surface after the drug is no longer marketed and its patent has run out? Whether it’s an FDA advisory or a trial lawyer solicitation about harm that may have been done to you, the warnings are always belated and useless. If a drug you took four years ago may have given you liver damage, why didn’t the FDA tell you then? Why didn’t the FDA recall the drug or better yet, not approve it in the first place? The official answer from the FDA and Big Pharma is that problems with a drug are only seen after millions begin using it, which is why post-marketing surveillance is conducted. In other words—who knew? It is the business model for new drugs that provokes Big Pharma to bury risks and exaggerate benefits. Hidden and unforeseen risks in new drugs are such a danger that some medical professionals advise patients to wait up to seven years before they try a new drug. 1. 2. 3. 4. 5. 6. 7. About the Author

Cosmic Inflation Explained Free excerpt from The PHD Movie 2! - Watch this free clip from the movie that Nature called "Astute, funny"! Watch the new movie! Summer Hiatus - PHD has been on Summer Hiatus while Jorge finishes the new PHD Movie. The PHD Movie 2 OFFICIAL TRAILER - is out!! Filming is done! Coming to Campuses this Fall! The Science Gap - Watch Jorge's TEDx Talk: Internet Archaeol. 40. Winder and Winder. Complexity, Compassion and Self-Organisation: Human Evolution and the Vulnerable Ape Hypothesis 1. School of Arts and Cultures, Newcastle University, UK / Agora for Biosystems, Sigtuna Foundation, Box 57, 193 22, Sigtuna, Sweden. nick.winder@newcastle.ac.uk 2. Department of Archaeology, University of York, The King's Manor, York YO1 7EP, UK isabelle.winder@york.ac.uk Cite this as: Winder, N.P. and Winder I.C. (2015). Summary Humans are agents capable of helping others, learning new behaviours and forgetting old ones. We revisit the seminal literature of evolutionary biology and show that the paradigmatic fault lines of 21st century anthropology can be traced back to the 19th century and beyond. The modern synthesis is now under pressure from the evidence of anthropology, sociology, palaeontology, ecology and genetics. The extended synthesis allows for the possibility that great apes were agents long before they were human and that this agency enabled them to fit their environments to their own needs. Go to Table of Contents. Features

Enlightened Consciousness :: Garbage Warrior What do beer cans, car tires and water bottles have in common? Not much unless you're renegade architect Michael Reynolds, in which case they are tools of choice for producing thermal mass and energy-independent housing. For 30 years New Mexico-based Reynolds and his green disciples have devoted their time to advancing the art of "Earthship Biotecture" by building self-sufficient, off-the-grid communities where design and function converge in eco-harmony. However, these experimental structures that defy state standards create conflict between Reynolds and the authorities, who are backed by big business. Shot over three years and in four countries, Garbage Warrior is a timely portrait of a determined visionary, a hero of the 21st century...

Huge Underwater Pyramid Discovered Near Portugal – The Navy is Investigating Portuguese news reported the discovery of a very large under water pyramid first discovered by Diocleciano Silva between the islands of São Miguel and Terceira in the Azores of Portugal. According to claims, the structure is said to be perfectly squared and oriented by the cardinal points. Current estimates obtained using GPS digital technology put the height at 60 meters with a base of 8000 square meters. The Portuguese Hydrographic Institute of the Navy currently has the job of analyzing the data to determine whether or not the structure is man-made. “The pyramid is perfectly shaped and apparently oriented by the cardinal points,” Silva told Diário Insular, the local newspaper. The pyramid was found in an area of the mid-Atlantic that has been underwater for about 20,000 years. While the Portuguese Navy still hasn’t determined the origins, many might question why this hasn’t been first reported on sooner than late 2012. Right: The actual pyramid, as scanned with high-tech device

New Ancient “Mystery Human” Species Identified Shakes Up The Theory Of Evolution Evolution is something scientists have observed at several different levels in nature, and when it comes to human ancestry, they’ve been able to collect bits and pieces of the giant puzzle that is human evolution. We do know that some form of evolution (scientifically speaking) has occurred on various levels, but there are still many missing links to our evolutionary journey, and new discoveries made every year are continuing to re-write what we previously believed to be true. It’s important to remember that there is still much we do not know, and the evolutionary tree is far from understood, let alone complete. A New Species Discovered? One great example is a discovery that was made just over a year ago where researchers found what looks to be an entirely new species of hominin that is currently unknown to modern day science. The discovery was made in a Siberian cave. “The best explanation is that the Denisovans interbred with an unidentified species, and picked up some of their DNA.

Looking At Tears Under A Microscope Reveals An Amazing Fact One day Rose-Lynn Fisher wondered if her tears of grief would look different compared to her tears of joy, so she began to explore them up close under a microscope. She studied 100 different tears and found that basal tears (the ones that our body produces to lubricate our eyes) are drastically different from the tears that happen when we are chopping onions. The tears that come about from hard laughter aren’t even close to the tears of sorrow. Like a drop of ocean water each tiny tear drop carries a microcosm of human experience. Tears from laughing until crying Tears of change Tears of possibility and hope Tears of grief Tears from onions Joseph Stromberg of the Smithsonian’s Collage of Arts and Sciences explained that there are three major types of tears: basal, reflex, and psychic (triggered by emotions). Basal tears Tears of timeless reunion Tears of ending and beginning Tears of release Tears of elation at a liminal moment Tears of remembrance Credit: Rose-Lynn Fisher Source: Life Buzz