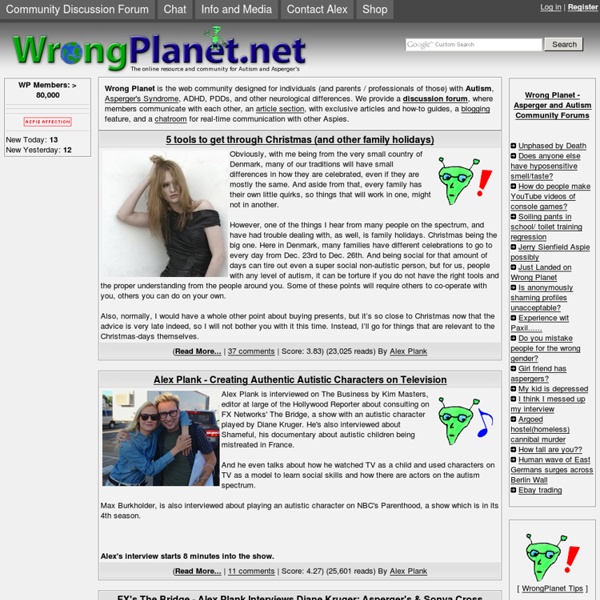 ASPIE STRATEGY: The Hidden Autistics - Asperger's in Adults Recently I encountered a problem while collaborating with a group therapist with whom I share a patient. My patient has progressed quickly in therapy, as do many adults on the spectrum. However he did not start off as stereotypically autistic. It took a few sessions to realize this fine gentleman suffered mightly with the symtoms of Asperger Syndrome, which he kept well managed and thoroughly hidden. In fact, "Joe", as we'll call him, socialized quite well. Diagnosing this man was problematic. Partners of people on the spectrum are drawn to what they can sense is inside their partner. So what was the problem I ran into with the collaborating therapist? One person remains unconvinced. I'd like to write more about this "hidden autistic" phenomena.

Autism Hangout Autism Network International The Aspergian Mythos and Ethos posted September 06, 2008 02:23 PM A forgotten civilisation We call this land Aspergia. We pronounce it so because no one knows what its real name was, or the tongue spoken by its people. Aspergia; a land surrounded by oceans, as far as the eye can see. A land of sea-gazing people, Aspergians, who venture into the great waters for fishing, but never the great distances required to find others, although they fiercely believe they exist.. Many, Many eons in the past, this new civilisation was founded, building great towers and dwellings, and thriving in a social structure, very different to that which we observe today. Despite being surrounded by oceans and no knowledge of another land, far or near, the Aspergians strongly held that there are others beyond the great waters. There were ancient stories told of encounters with other peoples from beyond the sea, who landed on Aspergia and even took some of its residents with them.

AANE - Asperger Syndrome and the DSM V "We've been serving YOU, not your diagnosis, since 1996. We will continue to do so." The staff and Board of Directors of the Asperger's Association of New England (AANE) would like to reassure our community that we will still be here to serve you despite the changes that may ensue from the recent publication of the 5th edition of the Diagnostic and Statistical Manual (DSM-5) by the American Psychiatric Association. In the DSM-5, Autistic Spectrum Disorder, a new diagnostic category, includes all forms of autism, including Asperger Syndrome. It is possible that some people who might have received the AS diagnosis will get a diagnosis of Social Communication Disorder (or Pragmatic Language Disorder), which is not considered a form of autism. At present, no one can predict the impact the new terminology in the DSM-5 will have on the lives of people living with Asperger Syndrome and related conditions. We invite you to continue the journey together.

Autism Watch Autistic Culture Definition Autistic culture is culture built around the ways of speaking, thinking, and acting that come naturally to autistic people, or which have been created in Autistic communities. Description Autistic culture is the culture created by and for autistics. Much of it has been developed in the Autistic community, while other parts of it have developed as a result of interactions outside of it. Autistic culture has been studied by cultural anthropologists. Autistic culture has developed its own customs, traditions, and approaches to expression and social interaction. -List of related media/links -List of concrete examples Case example: At Autreat, attendees wear color-coded badges to indicate whether or not they want people to talk to them. See Also Autreat

Inventor Of ADHD's Deathbed Confession: "ADHD Is A Fictitious Disease& Fortunately, the Swiss National Advisory Commission on Biomedical Ethics (NEK, President: Otfried Höffe) critically commented on the use of the ADHD drug Ritalin in its opinion of 22 November 2011 titled Human enhancement by means of pharmacological agents: The consumption of pharmacological agents altered the child’s behavior without any contribution on his or her part. That amounted to interference in the child’s freedom and personal rights, because pharmacological agents induced behavioral changes but failed to educate the child on how to achieve these behavioral changes independently. The child was thus deprived of an essential learning experience to act autonomously and emphatically which “considerably curtails children’s freedom and impairs their personality development”, the NEK criticized. The alarmed critics of the Ritalin disaster are now getting support from an entirely different side. This is well paid.