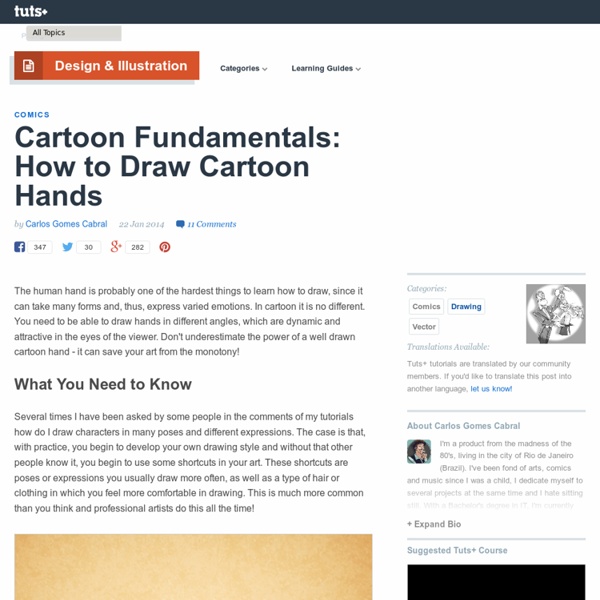 The human hand is probably one of the hardest things to learn how to draw, since it can take many forms and, thus, express varied emotions. In cartoon it is no different. You need to be able to draw hands in different angles, which are dynamic and attractive in the eyes of the viewer. Don't underestimate the power of a well drawn cartoon hand - it can save your art from the monotony! Several times I have been asked by some people in the comments of my tutorials how do I draw characters in many poses and different expressions. The case is that, with practice, you begin to develop your own drawing style and without that other people know it, you begin to use some shortcuts in your art. The fact is that doing this with hands is very difficult! The hand consists of several different bones, particularly the fingers, which means that they have different sizes and could bend in different directions. Starting from the back of the hands, let's draw the following simple semi circle: Excellent!

Human Anatomy Fundamentals: Advanced Body Proportions – Tuts+ Tutorials In our last session we learned the basic, generic proportions and joint alignments of the human figure, and if you've been practicing you should be ready for some diversity. The most obvious differentiation may be between men and women, but an illustrator must also be familiar with the ways the body also changes according to age (while it is still growing) and type. Male vs. Female Proportions Male and female proportions are so different that even a skeleton (or certain parts of it) betrays its sex. Designing a Character’s Lifespan In this tutorial you'll learn how to create a character that spans a lifetime. We'll learn the features that define the various life phases of a character. We'll look at lines of action, shapes, and characteristics that define: childhood, teen, adulthood, maturity, and old age. Step 1 - Childhood Line Of Action

Cartoon Fundamentals: Create Emotions From Simple Changes in the Face There are millions of eyes, mouths, noses, ears, chins in the world, each with their own characteristics. However, to draw faces in a cartoon style, you just need to understand the basics of them. Once you have mastered these concepts, pay attention to the depth, make sure that the head of your characters give the impression of being three-dimensional and you have mastered the technique of drawing them from every imaginable angle. If you can do that, great! But if you really want to draw attention to your art, you have to master the technique to bring them to life with facial expressions!

How to Use Good Reference Photos for Landscape Painting The problem is knowing how to choose and use a good photo. This is an important step to the success of your finished painting. Problems can arise when the artist relies too heavily on photographs for their soul inspiration because photos obviously lack the depth, value, color and saturation of reality. For instance, the beautiful colors and details of a shadow are generally lost within a photograph, as explained below in Rusty’s demonstration. This is why most professional artists make outdoor plein air sketches of their landscape subject, along with reference photographs to be used in the studio.

Human Anatomy Fundamentals: Balance and Movement – Design & Illustration – Tuts+ Tutorials This is our last session working with the basic structure of the body before we start clothing it in flesh. We have seen how it is proportioned and how those proportions vary within limits; now we'll see how it counters gravity with posture – and how far posture can be pushed before it falls over (or, on paper, looks out of balance). The body's Center of Gravity (CoG) is roughly behind the belly button. The body is supported by whatever part touches the ground: generally both feet, but it can be one foot, both feet and one hand, two hands, etc. The Center of Support (CoS) is the mid-point between those points of contact with the ground, whether it's a single point, or they form a line, a triangle or a square.

Materials Guide Pens For those starting out with their sketching, pens are a good way to getb etter faster. Using a pen makes you commit to the lines you are throwing down. To become a great athlete it requires practice and training…don’t fool yourself, its the same thing here. There is no such thing as a “magic pen,” there is only the designer who has worked it out so much that he/she produces their own magic. Here are some pens that have proven to be great for a variety of different styles and lineweights. Cartoon Fundamentals: How to Draw a Cartoon Body The pleasure of creating a cartoon character is immeasurable. The act of building and developing a character is not just linked to the construction of the figure: each character has its own shape, personality and attributes. It’s OK if you already know about the proportions of the head and about facial expressions. But that knowledge is useless if you don’t know how to build their bodies!

surface fragments: How the Old Masters created the look of Gold in Painting The detail (above) from Van Loo's painting, Marie Leszczinska Queen of France, is fascinating to me. I've been trying to figure out why I think his rendering of the gold table is unsuccessful. Though he's obviously a meticulous craftsman and clearly spent ages with a magnifying glass in one hand and a paintbrush in the other, there's something overwrought about the brushwork. His table looks plastic, but it took me a while to figure out why. Holbein was, of course, a master at painting the detailed effects of light and shade on any number of textures. I examined his Portrait of Charles de Solier (above) for clues as to his technique for painting gold.

design.tutsplus Elephants are a one of a kind - there's no other animal with such amazing tusks and trunk. They can be also tricky to draw, since they look so simple. I will show you how to draw a realistic elephant, be it African or Asian, in every pose you'll want to. Follow me and I'll teach you all elephant things! When we look at an elephant skeleton, we can see it's unproportional and somewhat clumsy, big head, long legs and bulgy barrow.