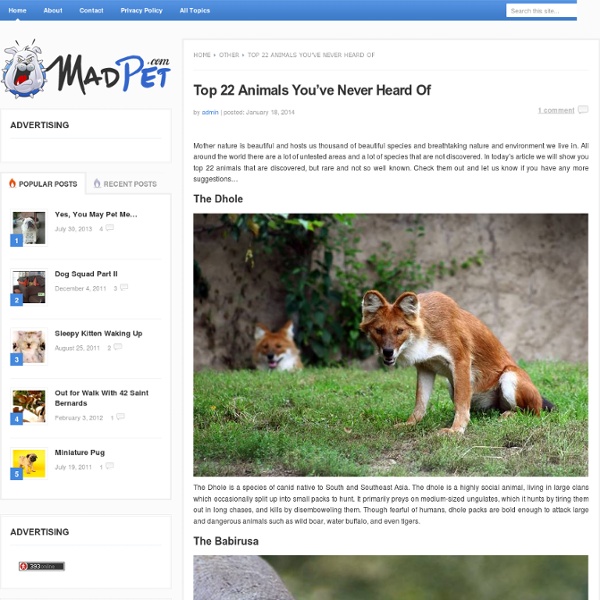 Mother nature is beautiful and hosts us thousand of beautiful species and breathtaking nature and environment we live in. All around the world there are a lot of untested areas and a lot of species that are not discovered. In today’s article we will show you top 22 animals that are discovered, but rare and not so well known. The Dhole The Dhole is a species of canid native to South and Southeast Asia. The Babirusa Babirusa, meaning “Hog-deer”, are members of the pig family found in Wallacea, or specifically the Indonesian islands of Sulawesi, Togian, Sula and Buru. Pink Fairy Armadillo The pink fairy armadillo is approximately 3.5-4.5 inches long, excluding the tail, and is pale rose or pink in color. The Fossa The fossa is a cat-like, carnivorous mammal that is endemic to Madagascar. The Gerenuk The gerenuk, also known as the Waller’s gazelle, is a long-necked species of antelope found in dry thorn bush scrub and desert in Eastern Africa. Naked Mole Rat Irrawaddy Dolphin Markhor Yeti Crab Related:  frf1344

image These 19 Nightmarish Places Will Keep You Awake At Night… They Sent Chills Down My Spine. As you go about your daily life, it’s easy to forget all of the weird and wonderful things that are tucked away around the world. A Redditor cobbled together 19 of the strangest places on earth, reminding us all of the creepy things that could be hidden in our very towns. Dark forests, abandoned cities, strange museums and other oddities are everywhere. You just need to know how to find them. 1.) 2.) 3.) 4.) 5.) 6.) 7.) 8.) 9.) 10.) 11.) 12.) 13.) 14.) 15.) 16.) 17.) 18.) 19.) Some of the strangest places on earth aren’t legitimately haunted, instead they are haunted by the memories of the horrors that were once committed there. Share these strange places with others… spread the chills that go down your spine.

Do Try This At Home Scientific experiments do not need to happen in fancy laboratories. Exploring science can happen at home using inexpensive supplies. Oobleck Oobleck is a non-Newtonian fluid that behaves unlike other fluids. For this experiment, you will need: 1 part water 2 parts cornstarch Drops of food coloring (there are a few options with this) Combine ingredients and stir. Oobleck is nontoxic, but does get messy. Precipitation in a Jar: Exploring precipitation at home is quite easy. 200 ml (1 cup) Hot, but not boiling, water Tall glass jar Glass plate Ice cubes Pour the hot water into the clear glass jar and immediately cover with the plate. DNA Extraction DNA can be extracted and examined quite easily. To begin, you will need to choose the source of DNA. Add the plant material, salt, and water to the blender. Unpoppable bubbles Industrial strength bubbles that resist popping are easy to make. Slowly stir the ingredients together in the bowl, as to not form bubbles. Glow in the Dark Bubbles

How To Fathom Pi: Amazing Visual Illustrations Distribution of the first 123,201 digits of π mapped onto a red-yellow-blue Brewer palette and placed as circles on an Archimedean spiral by Martin Krzywinski Pi is, quite possibly, the most famous number known to man.* This fact is a little bit ironic, as we don’t actually have a number for pi. Well, not a complete number anyways, because pi never ends. If you try to pin it down to the decimal, you can’t do it—the decimal representation goes on endlessly, and it never settles into a repeating patters. Hence, all the fame. If you are unfamiliar with this number, pi is the mathematical constant that represents the ratio of a circle’s circumference to its diameter, and it is typically written as 3.14159 . However, (despite some minor set backs) the quest to understand pi continues. Recently, Cristian Ilies Vasile created an amazing way to visualize pi. This visual representation was created by a 41 year old individual who suffered brain damage after being attacked by muggers.

A4 Papercuts Ogni scultura cartacea realizzata dall’artista Peter Callesen ha un unico punto di partenza: un candido e standardizzato foglio formato A4. Quello che accade dopo il “trattamento Callesen” lo potete vedere con i vostri occhi. Uccelli in procinto di spiccare il volo, scheletri che prendono vita… “The negative and absent 2 dimensional space left by the cut, points out the contrast to the 3 dimensional reality it creates, even though the figures still stick to their origin without the possibility of escaping“. Chapeau. [Via] Comments comments 12 Enjoyable Names for Relatively Common Things Fancy yourself a logophile ... and didn't have to look up "logophile"? See if you know these 12 words for common things. 1. 2. 3. 4. 5. 6. 7. 8. Getty Images 9. 10. 11. 12. What are some of your favorite extra ordinary/extraordinary words? For 12-12-12, we’ll be posting twenty-four '12 lists' throughout the day.

▶ One Direction - What Makes You Beautiful (5 Piano Guys, 1 piano) - ThePianoGuys We're on Tour! Sheet Music: Album here: song here: Subscribe to our main channel: to our BTS channel: us on Facebook: us on Twitter: Get PianoGuys T-Shirts, Wristbands, Sheetmusic here: STORY BEHIND THE SONGThe idea: A couple months ago the 5 of us were gathered round a piano prepping for a video shoot scheduled for that day. The song: We went through several song possibilities before landing on "What Makes You Beautiful" by One Direction. The location: Where to film? Many thanks to the awesome guys at Annex Recording and Giles Reaves (engineer) for letting us record at their studio.

The Internet in Real-Time Mirror's Edge Parkour POV Body Painter Transforms Humans Into Breathtaking Portraits Of Animals There’s more to this beautiful heron than meets the eye. It’s actually a human body covered intricately in paint. The stunning work was created by artist Shannon Holt, a body painter from Florida who’s known for her ability to transform the human body into a canvas for beautiful art. The piece is part of Holt’s “Florida Wildlife Series,” a collection of several animal portraits, all painstakingly drawn on human bodies. In a May interview with the Daytona Beach News-Journal, Holt explained what it is about body painting as a medium that she loves so much. “You can have a really beautiful work that transforms the body into a human sculpture or abstract piece that touches on art history, or is a master copy of an Italian Renaissance painting,” she told the news outlet. She added that she loves the “ephemeral” nature of body painting. Scroll down to see more images of Holt’s "Florida Wildlife Series." Ryder Gledhill / Shannon Holt / Caters News Honey Bees

Astrophysicist Writes Brutal Response To WSJ Article Claiming Science Has Proven God Exists Recently – Christmas Day, in fact – the Wall Street Journal published an article by a Christian apologist who boldly declared that science was “increasingly” making the case for God, year-after-year. Eric Metaxas is best known as a biographical writer, but he is also lauded (in conservative circles) for his work promoting the pro-life movement and making sweeping, outrageous conclusions about the existence of God based on whatever tenuous evidence seems handy at the time. If sweeping, outrageous conclusions be Metaxas bread-and-butter, than his Wall Street Journal article is perhaps his magnum opus. It’s a doozy. After subtitling his work “The odds of life existing on another planet grow ever longer. The arguments aren’t new. Today there are more than 200 known parameters necessary for a planet to support life—every single one of which must be perfectly met, or the whole thing falls apart. Feature image via The Conversation

5 Ancient New Year’s Celebrations — HISTORY Lists There’s nothing new about New Year’s. Festivals marking the beginning of the calendar have existed for millennia, and a few are still actively observed by millions of people around the world. Get the facts on the ways 5 ancient civilizations rang in the New Year.These early New Year’s celebrations often had important social, political and religious implications, but in some cultures the holiday traditions were not so different from the champagne, parties and fireworks of today. 1. Getty Images Following the first new moon after the vernal equinox in late March, the Babylonians of ancient Mesopotamia would honor the rebirth of the natural world with a multi-day festival called Akitu. One fascinating aspect of the Akitu involved a kind of ritual humiliation endured by the Babylonian king. 2. Roman coins depicting Janus Romans would celebrate January 1 by giving offerings to Janus in the hope of gaining good fortune for the new year. 3. 4. 5.

Insane Assassin's Creed III concept art by William Wu. A Guy Created Hilarious Fake Animal Facts & Put Them Up At The Zoo If you've ever been to a zoo, you know that those little 'blurbs' on the animal signs can often go overlooked. Most people don't care what country the red-tailed hawk originated from or the typical shade of bamboo koalas prefers to snack on at night. Comedian Jeff Wysaski (aka Obvious Plant), decided to spice up those fun facts by making them, well, not facts at all. Check out a handful of his signs below, and for more of his work check him out here.