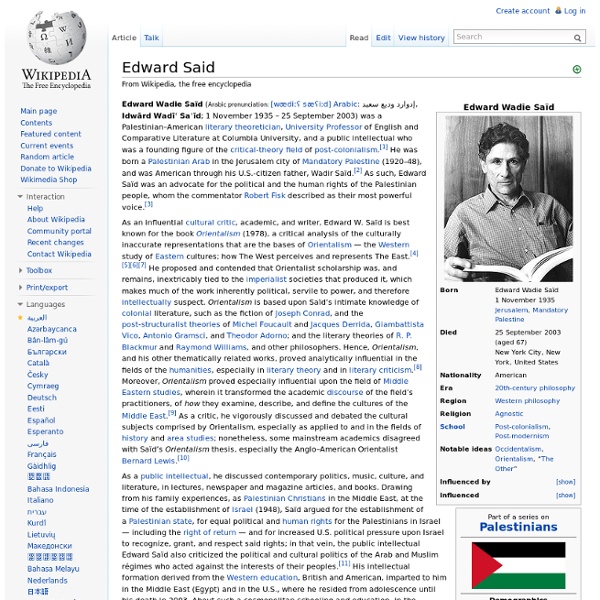 Edward Wadie Said (Arabic pronunciation: [wædiːʕ sæʕiːd]; Arabic: إدوارد وديع سعيد‎, Idwārd Wadīʿ Saʿīd; 1 November 1935 – 25 September 2003) was a professor of English and Comparative Literature at Columbia University, a literary theorist, and a public intellectual who was a founding figure of the critical-theory field of Post-colonialism. Born a Palestinian Arab in the city of Jerusalem in Mandatory Palestine (1920–48), he was an American citizen through his father.[3] Said was an advocate for the political and the human rights of the Palestinian people and has been described by the journalist Robert Fisk as their most powerful voice.[4] As a public intellectual, Said discussed contemporary politics and culture, literature and music in books, lectures, and articles. Biography Early life Edward and his sister Rosemarie (1940) At school Said described his childhood as lived "between worlds", the worlds of Cairo and Jerusalem, until he was twelve.[19] In 1947, he attended the Anglican St. Related:  People/Artists

Vladimir Davydov Vladimir Davydov (December 14 [O.S. December 2] 1871 – December 27 [O.S. December 14] 1906) was the second son of Lev and Alexandra Davidov and nephew, as well as lover, of the composer Pyotr Ilyich Tchaikovsky, who called him "Bob". Life[edit] From his earliest years, Davydov showed an aptitude for music and drawing, which was encouraged by his uncle.[1] After he studied at the Imperial School of Jurisprudence in Saint Petersburg, however, Bob decided on a military career and joined the Preobrazhensky Lifeguard regiment.[1] He resigned his commission as a lieutenant in 1897[2] and moved to Klin, where he helped the composer's brother Modest create a museum to commemorate Tchaikovsky's life.[3] Prone to depression, Davydov turned to morphine and other drugs before he committed suicide in 1906 at the age of 34.[2] He is buried at the town's Dem'ianovo Cemetery.[1] Relationship with Tchaikovsky[edit] Dedications[edit] Notes[edit] References[edit] External links[edit]

Marvin Harris Marvin Harris (August 18, 1927 – October 25, 2001) was an American anthropologist . He was born in Brooklyn, New York . A prolific writer, he was highly influential in the development of cultural materialism . In his work he combined Karl Marx's emphasis on the forces of production with Thomas Malthus 's insights on the impact of demographic factors on other parts of the sociocultural system . Labeling demographic and production factors as infrastructure , Harris posited these factors as key in determining a society's social structure and culture. Over the course of his professional life, Harris drew both a loyal following and a considerable amount of criticism. In his final book, Theories of Culture in Postmodern Times, Harris argued that the political consequences of postmodern theory were harmful, a critique similar to those later developed by philosopher Richard Wolin and others. Early career [ edit ] Theoretical contributions [ edit ] Criticisms and controversies [ edit ]

ei: Film review: "Edward Said: The Last Interview" Filmed within three days in 2002, just one year before his death at the age of 67, Edward Said: The Last Interview is a compelling portrait of a man who was not only a strong advocate of the Palestinian cause, but an accomplished teacher, literary critic, writer and musician. After living for more than ten years with a fatal strain of leukemia, which he was diagnosed with in 1991, Said refused interviews. However, former student D.D. Confronted with the visage of a terminally ill Said, Glass does not hesitate to ask about his incurable leukemia. When asked about his memoir Out of Place (1999), Said explains that he wrote it after the death of his mother. This sense of difference carried over into his academic training at Princeton and Yale. The representation of Arabs and the “other” also intrigued Said and led him to research historical depictions starting with Mohammed in Dante’s Inferno who landed in the eighth circle of hell. Related links: BY TOPIC: Edward SaidBY TOPIC: Films

Susan Sontag: Notes On "Camp" Published in 1964. Many things in the world have not been named; and many things, even if they have been named, have never been described. One of these is the sensibility -- unmistakably modern, a variant of sophistication but hardly identical with it -- that goes by the cult name of "Camp." A sensibility (as distinct from an idea) is one of the hardest things to talk about; but there are special reasons why Camp, in particular, has never been discussed. It is not a natural mode of sensibility, if there be any such. Indeed the essence of Camp is its love of the unnatural: of artifice and exaggeration. Though I am speaking about sensibility only -- and about a sensibility that, among other things, converts the serious into the frivolous -- these are grave matters. Taste has no system and no proofs. To snare a sensibility in words, especially one that is alive and powerful,1 one must be tentative and nimble. These notes are for Oscar Wilde. 1. 2. 3. 4. 5. 6. 7. 8. 9. 10. 11. 12. 13. 14.

Franz Boas Franz Uri Boas (/ˈfrɑːnz ˈboʊ.æz/; July 9, 1858 – December 21, 1942)[2] was a German-American[3] anthropologist and a pioneer of modern anthropology who has been called the "Father of American Anthropology".[4][5] Studying in Germany, Boas received his doctorate in psychology, specializing in the psychophysics of perception, and did post-doctoral work in geography. He participated in an expedition to northern Canada where he became fascinated with the culture and language of the Baffin Island Inuit. He went on to do field work with the indigenous cultures and languages of the Pacific Northwest. In 1887 he emigrated to the United States where he first worked as a museum curator at the Smithsonian, and in 1899 became professor of anthropology at Columbia University where he remained for the rest of his career. Early life and education[edit] Franz Boas was born in Minden, Westphalia. Post-graduate studies[edit] He returned to Berlin to complete his studies. Fin de Siècle debates[edit]

The Clerk's Tale Plot[edit] The Clerk's tale is about a marquis of Saluzzo in Piedmont in Italy named Walter, a bachelor who is asked by his subjects to marry to provide an heir. He assents and decides he will marry a peasant, named Griselda. Griselda is a poor girl, used to a life of pain and labour, who promises to honour Walter's wishes in all things. Griselda's child is kidnapped After Griselda has borne him a daughter, Walter decides to test her loyalty. Finally, Walter determines one last test. Prologue[edit] One of the characters created by Chaucer is the Oxford clerk, who is a student of philosophy. The narrator claims that as a student in Italy he met Francis Petrarch at Padua from whom he heard the tale.[2] Sources[edit] The story of patient Griselda first appeared as the last chapter of Boccacio's Decameron, and it is unclear what lesson the author wanted to convey. Chaucer's intentions[edit] Given the context of the Clerk's tale, what lesson, if any, Chaucer intended remains an open guess. [edit]

Shane Harris Shane Harris is an American journalist and author. He is Senior Intelligence and National Security Correspondent for the Daily Beast.[1] He specializes in coverage of America's intelligence agencies.[2] He is author of the books The Watchers: The Rise of America's Surveillance State and @War: The Rise of the Military-Internet Complex, about the impact of cyberspace as the American military's "fifth-domain" of war. Harris is currently an ASU Future of War Fellow at New America Foundation.[3] Career[edit] Political views[edit] Awards[edit] In 2010, Harris received the 24th annual Gerald R. Books[edit] See also[edit] References[edit]

Lynn Conway Lynn Conway (born 1938) is an American computer scientist, electrical engineer, inventor, trans woman, and activist for the transgender community. Conway is notable for a number of pioneering achievements, including the Mead & Conway revolution in VLSI design, which incubated an emerging electronic design automation industry. She worked at IBM in the 1960s and is credited with the invention of generalised dynamic instruction handling, a key advance used in out-of-order execution, used by most modern computer processors to improve performance.[1][2][3][4][5][6][7][8] Early life and education[edit] Conway grew up in White Plains, New York. Although shy and experiencing gender dysphoria as a child, Conway became fascinated and engaged by astronomy (building a 6-inch (150 mm) reflector telescope one summer) and did well in math and science in high school. Early research at IBM[edit] Gender transition[edit] Career as computer scientist[edit] "Clearly a new paradigm had emerged . . .

Robert Farris Thompson Robert Farris Thompson (born December 30, 1932, El Paso, Texas[1]) is the Colonel John Trumbull Professor of the History of Art at Yale University. He lived in the Yoruba region of southwest Nigeria for many years while he conducted his research of Yoruba arts history. He is affiliated with the University of Ibadan and frequented Yoruba village communities. Thompson has studied the African arts of the diaspora in the United States, Cuba, Haiti, Puerto Rico, and several Caribbean islands. Robert Farris Thompson is also an authority on hip hop culture. History at Yale[edit] In 1955, Thompson received his B.A. from Yale University. Having served as Master of Timothy Dwight College from 1978 until 2010, he was the longest serving master of a residential college at Yale. Publications and Areas of Study[edit] Awards[edit] In 2007, Thompson was given the "Outstanding Contribution to Dance Research" award, by the Congress on Research in Dance.[1] References[edit] Bibliography[edit]

Camille Paglia Overview[edit] Paglia has said that she is willing to have her entire career judged on the basis of her composition of what she considers to be "probably the most important sentence that she has ever written": "God is man's greatest idea."[11] Paglia's Sexual Personae was rejected by no fewer than seven different publishers (not unusual, in and of itself), but when finally published by Yale University Press, became a best seller, reaching seventh place on the paperback best-seller list, a rare accomplishment for a scholarly book.[5] 'Paglia called it her "prison book", commenting, "I felt like Cervantes, Genet. It took all the resources of being Catholic to cut myself off and sit in my cell Personal life[edit] For over a decade, Paglia was the partner of artist Alison Maddex.[21][22] Paglia legally adopted Maddex's son (who was born in 2002).[13] In 2007, the couple separated.[23] Education[edit] Career[edit]