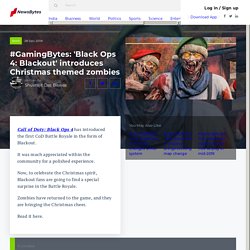 However, the disappearance from the Blackout map was temporary, as they seem to have returned. Not just that, they are also bringing the Christmas festive spirit to Blackout by wearing Santa hats. The studio Treyarch released an official statement announcing the return of zombies, saying, 'Zombies in Blackout are dressed for the season! ' Reports Some gamers have noted the festive zombies are faster Some gamers have notably reported that the Santa hat-wearing zombies are moving slightly faster than before. However, we could not find any major difference except for the obvious cosmetic change, which appears to be the main distinction from the original counterparts. Notably, these zombies are only going to sport Santa hats for a limited time. Blackout gets a permanent zombie spawn point Opinion How will these changes affect gameplay? 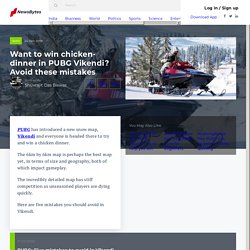 Therefore, in order to loot properly, we suggest not landing in far off locations. Choose a few unmarked houses in solos to land and loot without fear of confrontation, while safely staying within the playzone. If in duos or squads, choose medium action landing spots for good loot, but beware of the enemy presence nearby. Prints. #GamingBytes: Five most health damaging weapons in PUBG.

The shot that rings across the map The Arctic Warfare Magnum, AWM, is not a weapon, it's a statement. 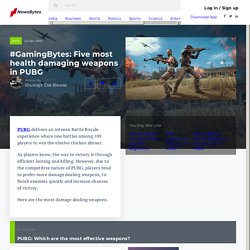 With a base damage of 120, it is the deadliest sniper rifle and overall gun. It is capable of killing enemies with level three headgear 500 meters away, with a single headshot. The sniper and its magnum bullets are found only at airdrops. #GamingBytes: Best loot and landing locations in PUBG Vikendi. Two things to remember for Vikendi landing First, Vikendi is a 6km by 6km map, meaning you can access almost all areas, irrespective of the flight path, if you time your landing well. 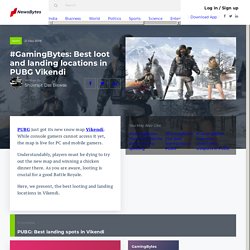 #GamingBytes: PUBG Mobile to get new 'Vikendi' snow map. Note the date Update to be made available from Tuesday, December 18 PUBG Mobile is getting its latest update after a scheduled maintenance of the servers, during that time, it will remain offline. 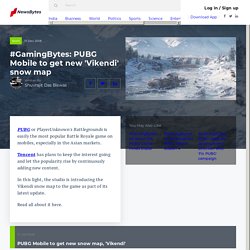 The update would be made available from Tuesday, December 18, and servers are expected to be offline between 5:30 AM and 2:30 PM IST, on Monday. Notably, the services might be resumed earlier or later than the stipulated time, based on the progress. Update your game before December 25, win exciting gifts Players who update their game before December 25 are eligible for exciting gifts, including an Outfit Box III, which will yield an item that can be accessed for seven days.

Xbox One Will Be The First To Access The Fallout 76 Beta. #GamingBytes: Five best PUBG guns for beginners. Double barrel death dealer Understandably a lot of beginners are averse to shotguns since they are not good at distances and have longer reload times. 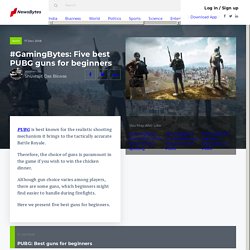 However, the S686 is lethal early on in the game. The double barrel 12-gauge gun will turn enemies nearby into red mist. Moreover, coupling it with bullet loops and choke will increase reload speed and make the spread accurate, turning the shotgun deadlier. Vector No recoil, no hassle SMG Boasting single, burst and auto modes, the Vector brings diverse firing techniques to the game, making it ideal for beginners.

Moreover, it uses, .45ACP ammo, which is easily available. #GamingBytes: Five PUBG tips for better enemy spotting. Landing Check your surroundings before landing Once players jump out of the plane at their desired landing spots, they head straight for these places. 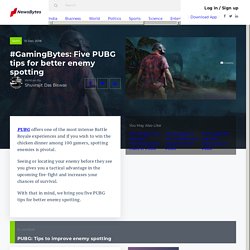 However, it would be wise to look around in the air before landing to see if any other enemies are headed to the same spot. In case too many players choose the same spot, it is always possible to drop elsewhere nearby and avoid early confrontations. Track noises. Best weapons to help you win PUBG. How have we analyzed the weapons? 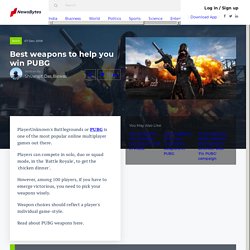 The analysis of the weapons has been based on the range, damage, accuracy, and firepower. Players might notice that some of the guns are missing. However, since not all guns are available across platforms, we have stuck to the guns which all players can access. Assault Rifles. #GamingBytes: Five mistakes you should avoid in PUBG. Outfits It's a Battle Royale not a carnival The in-game store offers a range of colorful outfits that look really cool and can be used by gamers to reflect their personalities. 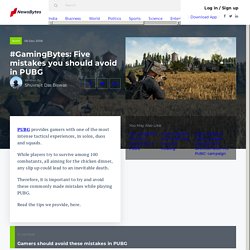 Although outfits give a creative mode of expressing your individuality in-game, bright cosmetics make players stick out like sore thumbs. This makes spotting and killing much easier. Pick outfits that help you blend with the surroundings, for a stealthier, safer gameplay. Nintendo Switch Online Is A Successor To The Virtual Console. #GamingBytes: Fortnite's five best streamers. Dakotaz Putting the fun in Fortnite Dakotaz has close to 3 million followers on Twitch and this is primarily because he makes streaming fun. 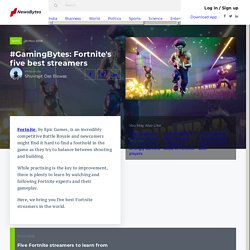 Mixing emoting and crazy gaming style with actual skill, he is adept at impulse grenades and rocket riding, while racking up multiple wins. More importantly, his videos have helpful tips to give you an edge in Fortnite and you could infuse some style in your game. #GamingBytes: Top 5 tips to win PUBG solo games. #GamingBytes: Fortnite successfully captures the Nintendo Switch scene. #GamingBytes: PUBG Mobile brings Diwali events to the game. A New And Maybe Better Way To Stop People From Being Jerks Online. SExpand As an avid LoL-player, I decree this brilliance. If anyone thinks it's too harsh, they haven't played LoL past level 15. LoL has the most toxic gaming community I've ever had the displeasure to experience.

I've played oodles of online games, have been called countless mixtures of creative expletives by Counter-Strike's finest word-smiths, had Engrish rage spat at me in Diablo 2, braved WoW's vigorous e-penis; the list goes on and on, my point is that I can take it. I rarely felt anything besides perhaps a little pity for those who would so quickly demean themselves as to fling empty threats at me, some random person on the internet.

Hauptseite – Telarapedia. #GamingBytes: Five PUBG facts you should know. #GamingBytes: Players react negatively to PUBG server changes. Changes A change is going to come PUBG introduced the server change in Update 22, a few days back. It ensured that the servers were automatically decided based on the region of players. In the case of groups with players from different regions, the game selects the best region to play in. Although this makes sense, players have complained about being sent to unfamiliar regional servers and suffering poor gameplay experience. Causes The complaints about poor online experience While some poor online experiences were due to high pings in unknown servers, most of it was due to matchmaking with Chinese players.

Without being offensive, players had initially wanted region-locking because Chinese players would cheat in-game. Despite the update, western players have still found themselves being matched with Chinese players. They are now calling for a region lock on only Chinese gamers. Love Sports news? Stay updated with the latest happenings. Notify Me Fixing problems. #GamingBytes: Five toughest achievements to unlock in PUBG. What is an achievement in PUBG? An achievement is like a mission within a game of PUBG. The game asks players to carry out various tasks or get specific styles of kills to unlock these achievements. In most cases, unlocking them is rewarded within the game through special cosmetics. #GamingBytes: Five best Battle Royale games like PUBG Mobile. A deliberate exclusion of epic proportions In our list, we have deliberately excluded the biggest competitor of PUBG, Fortnite. Developed by Epic Games, Fortnite recently launched for Android and is not yet available in all countries or across all devices.

This prompted us to exclude Fortnite in favor of other games. Knives Out So knives out, cut him up, don't look down Knives Out used to dominate Chinese markets and came out with an English version on popular demand. Developed by NetEase, it is often called a PUBG clone. 100 players enter the battleground and one emerges victorious. However, the tapping and swiping game control is a little difficult to master. #GamingBytes: Beware of these PUBG cheats. Please report hackers when you see them PUBG takes strict action against hackers, having banned over a million.

The game's hack detection systems are also up to date and known hacks get players immediately banned. If you feel someone cheated and killed you, use the report button on the death screen. Aimbots A bullet with your name on it. Turbo Lag vs Boost Threshold — What's The Difference? #GamingBytes: Five PUBG Mobile tips to win 'chicken dinner' #GamingBytes: Meltan is the new mythical Pokemon.

This is the story of how video game characters like Mario, Link, and Kirby helped save a "floating world" (literally translated): ukiyo-e, a genre in the ancient craft of Japanese woodprinting. After artistically languishing for most of the 20th century, the craft is in the process of being discovered by a whole new generation, thanks to Ukiyo-E Heroes, a collaboration between American illustrator Jed Henry and British craftsman David Bull that reimagines popular video game characters in the context of medieval Japan.

Of all the visual art the West associates with ancient Japan, woodprints are probably the most well known. You may not have ever heard the term ukiyo-e before, or know how a Japanese woodprint is made, but if you’ve ever seen a copy of The Great Wave off Kanagawa or The Dream of the Fisherman’s Wife, you know the style. But Bull wasn’t interested. #GamingBytes: Call of Duty introduces battle royale mode 'Blackout' 10 Creepiest Things in World of Warcraft.