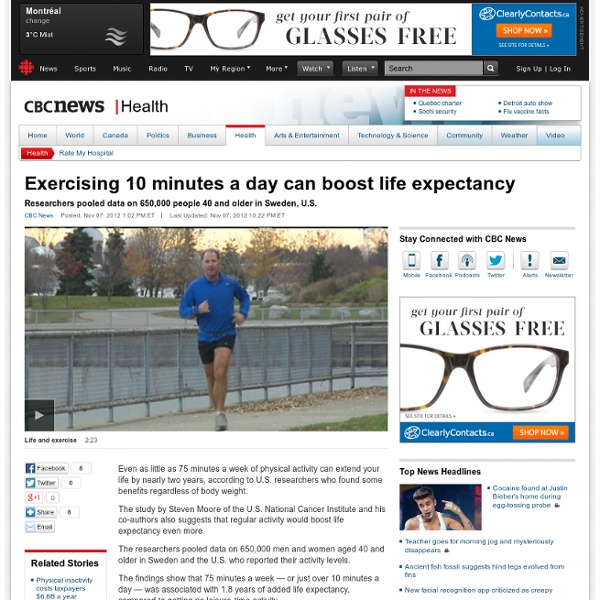 Even as little as 75 minutes a week of physical activity can extend your life by nearly two years, according to U.S. researchers who found some benefits regardless of body weight. The study by Steven Moore of the U.S. National Cancer Institute and his co-authors also suggests that regular activity would boost life expectancy even more. The researchers pooled data on 650,000 men and women aged 40 and older in Sweden and the U.S. who reported their activity levels. The findings show that 75 minutes a week — or just over 10 minutes a day — was associated with 1.8 years of added life expectancy, compared to getting no leisure-time activity. As well, brisk walking for 450 minutes a week, just over an hour a day, was associated with living 4.5 years longer. The researchers in the study in PLOS Medicine hope the findings convince sedentary people that even a modest physical activity program can boost health. Investigators also considered weight categories: Intensity rule of thumb

Biological Clock It may not be the eternal spring that Ponce de León searched for, but thanks to Steve Horvath PhD, a professor of human genetics and biostatistics at the University of California, Los Angeles, the Fountain of Youth is not as elusive as it once was. Our Real Biological Clock Horvath has developed a biological clock that makes it possible to measure the age of humans via tissue samples. "Many people associate the term 'biological clock' with issues surrounding fertility. Others think of it as a measure of longevity. Exercise: 7 Most Effective Exercises - Exercise and Fitness Tips with Workout Routines, and Mind - Body Fitness on MedicineNet So you want to lose weight, define your abs, don't want to buy or use those expensive machines AND want to do this at home! So, what can you do to accomplish this? Oh, and because your significant other wants to accomplish the same, are there different plans or ways for men and women? Of course, you both have busy lives so you cannot devote hours every day to reach these goals.

The Toxins That Affected Your Great-Grandparents Could Be In Your Genes Michael Skinner’s biggest discovery began, as often happens in science stories like this one, with a brilliant failure. Back in 2005, when he was still a traditional developmental biologist and the accolades and attacks were still in the future, a distraught research fellow went to his office to apologize for taking an experiment one step too far. In his laboratories at Washington State University, she and Skinner had exposed pregnant rats to an endocrine disruptor—a chemical known to interfere with fetal development—in the hope of disturbing (and thereby gaining more insight into) the process by which an unborn fetus becomes either male or female. But the chemical they used, an agricultural fungicide called vinclozolin, had not affected sexual differentiation after all.

Bottom line: aerobic activity burns fat best - Technology & Science Researchers discovered that aerobic training, such as jogging or swimming, is best at both burning fat and helping people lose weight. (Darryl Dyck/Canadian Press) Aerobic exercise is the best form of activity to burn fat when compared to resistance training and a combination of the two, according to researchers at Duke University. Their study, published in the Journal of Applied Physiology, is the largest randomized trial to monitor changes in body composition from the three modes of exercise in obese and overweight adults without diabetes. "We want to offer clear, evidence-based exercise recommendations that will truly help people lose weight and body fat," said lead author Leslie Willis, an exercise physiologist at Duke Medicine in Durham, N.C. Researchers were concerned with recent exercise guidelines recommending resistance training such as weightlifting as a means of helping people lose weight by increasing their resting metabolic rate.

Chinese Scientists Edit Genes of Human Embryos, Raising Concerns The experiment with human embryos was dreaded, yet widely anticipated. Scientists somewhere, researchers said, were trying to edit genes with a technique that would permanently alter the DNA of every cell so any changes would be passed on from generation to generation. Those concerns drove leading researchers to issue urgent calls in major scientific journals last month to halt such work on human embryos, at least until it could be proved safe and until society decided if it was ethical. Now, scientists in China report that they tried it.

Shifting the balance between good fat and bad fat Sanford-Burnham researchers show that protein p62 balances metabolism in fat tissue—making it an attractive target for anti-obesity therapies In many cases, obesity is caused by more than just overeating and a lack of exercise. Something in the body goes haywire, causing it to store more fat and burn less energy. But what is it? Sanford-Burnham researchers have a new theory—a protein called p62. According to a study the team published December 21 in the Journal of Clinical Investigation, when p62 is missing in fat tissue, the body’s metabolic balance shifts—inhibiting “good” brown fat, while favoring “bad” white fat.

Altering Community of Gut Bacteria Promotes Health and Increases Lifespan Study provides first systemic understanding of aging gut January 9, 2014/Novato, California: Scientists at the Buck Institute for Research on Aging have promoted health and increased lifespan in Drosophila by altering the symbiotic, or commensal, relationship between bacteria and the absorptive cells lining the intestine. The research, appearing in the January 16, 2014 edition of Cell, provides a model for studying many of the dysfunctions that are characteristic of the aging gut and gives credence to the growing supposition that having the right balance of gut bacteria may be key to enjoying a long healthy life. Jasper says the bacterial load in fly intestines increases dramatically with age, resulting in an inflammatory condition. The imbalance is driven by chronic activation of the stress response gene FOXO (something that happens with age), which suppresses the activity of a class of molecules (PGRP-SCs, homologues of PGLYRPs in humans) that regulate the immune response to bacteria.

Taste Sensors in the Gut Could Help Fight Obesity --by Suzanne Boothby The Gist With nearly two-thirds of American adults and one-third of American children overweight or obese, experts wonder what it will take to reverse this epidemic. Scientists are taking a closer look at taste—not just in the mouth, but also in the gut. Aging Successfully Reversed in Mice; Human Trials to Begin Next Scientists have successfully reversed the aging process in mice according to a new study just released. Human trials are to begin next, possibly before the year is over. The study was published in the peer reviewed science journal Cell after researchers from both the U.S and Australia made the breakthrough discovery. Lead researcher David Sinclair of the University of New South Wales says he is hopeful that the outcome can be reproduced in human trials.