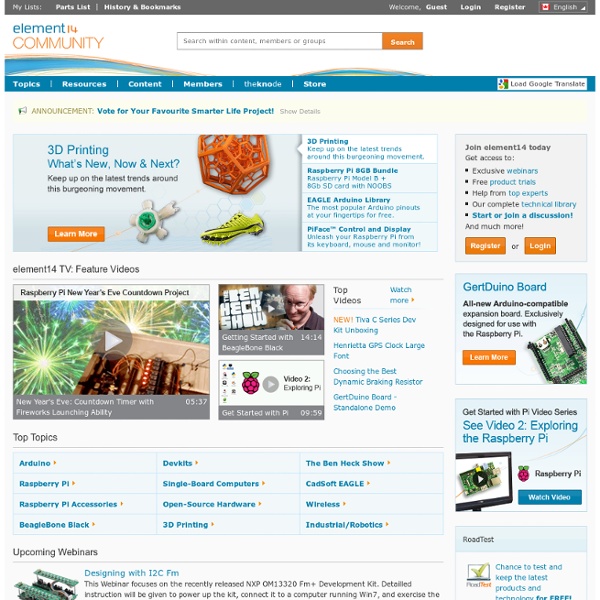 There has been a lot of publicity around the Heartbleed bug, a potential security vulnerability associated with Open SSL, an encryption used by many websites. We want to reassure customers that none of the transactional or community sites operated by Premier Farnell are impacted as we have not implemented any affected versions of the software in question on our sites. Expiring the announcement will not delete it but will remove it from the public announcement list. Are you sure you want to expire this announcement? Are you sure you want to delete this announcement?

Omxplayer Omxplayer is a video player specifically made for the Raspberry Pi's GPU made by Edgar (gimli) Hucek from the XBMC/Kodi project. It relies on the OpenMAX hardware acceleration API, which is the Broadcom's VideoCore officially supported API for GPU video/audio processing. Raspberry Pi forum user spenning made precompiled binaries available on the forum. See here. Project Huertomato Overview Hello World! Project Huertomato is born with the aim of providing the hydroponics and aquaponics community with a centralized and easy tool for managing their entire system. It was developed from it’s early stages with the open-source arduino philosophy in mind. Right now it’s a functional prototype and has been through two major hardware revisions and countless software ones. - Hardware Overview -

From Sand to Processor or How a CPU is made - Intel It is hard to believe that a modern processor (CPU) is the most complex product in the world. What is so complex in this piece of metal? In this article I will try to explain how a modern processer (CPU) is made from the sand. Processor Manufacturing It takes about $ 5 billion dollars to build a processor manufacturing factory. Home automation with RC wall plugs and Raspberry Pi [Jake] took some cheap hardware and figured out a way to use it as a huge home automation network. He’s chose a Raspberry Pi board to connect the radio controlled power outlets to his network. He wrote about his project in two parts, the first is hacking the RC outlet controller and the second is using the Raspberry Pi to manipulate it. These RC outlets are a pass-through for appliances that connect to mains (lamps, consumer electronics, christmas trees, etc). Often the protocol used by the cheap-as-dirt remote is difficult to work with, but [Jake] really hit it out of the part on this one.

SD Formatter 4.0 for Windows Download You ("Licensee") are granted a license for the Software defined in this End User License Agreement ("Agreement") on condition that you agree to the terms and conditions of this Agreement. If Licensee does not agree to the terms and conditions of this Agreement, promptly return the Software to SD Card Association (SDA). Article 1 License Licensee is granted the right to use the software, including the information provided from this downloading site, users manuals, and any other media provided to Licensee (collectively "Software"), but all applicable rights to patents, copyrights, trademarks and trade secrets in the Software are not transferred to Licensee.

Futuristic Food Probes - Philips Design Food Concepts are the Future of Nourishment The new conceptual designs by Phillips Design are the future of food. With the Phillips Design food concepts, we’ll be able to change foods into different shapes and consistencies, scan them for nutritional value, and create a biosphere for farming in the comforts of our living rooms. What the Phillips Design food concepts have achieved are interesting previews of what we can do with food in the near future. The company’s rapid-prototyping food probe, for instance, allows the user to reformat foods while maintaining or changing nutritional content. For instance, you could change a carrot into foam or Parmesan cheese into something akin to spaghetti. Another of the Phillips Design food concepts is the scanning wand which analyzes an individual’s dietary needs and then allows the user to scan foods that would correspond to those needs.

Browse Anonymously with a DIY Raspberry Pi VPN/TOR Router Surf the Internet securely with your very own portable WiFi VPN/TOR router. You can configure a Raspberry Pi with Linux and some extra software to connect to a VPN server of your choice. The VPN connection encrypts your internet traffic so that hackers and spies can’t figure out what web sites you are visiting, and the web sites you are visiting can’t tell which computer you are surfing from. Not sure what board is right for you?

A New Solar / Wind Charge Controller Based on the 555 Chip UPDATE This 555 based solar charge controller project has won first place in the Utility Category of the 555 Design Contest!!!!! Scroll to the bottom of the page for more information on the contest. Several years ago I began building my own wind turbines and solar panels to provide power on my remote, off-grid property. A charge controller is an essential part of any wind or solar system to ensure the batteries aren't over or under charged. The charge controller monitors the battery voltage and switches the batteries off charge when they are fully charged, and switches them back on charge when they reach a pre-set level of discharge.

“Raspberry Eye” Remote Servo Cam Webcams are a fun and useful tool. Being able to control where they’re looking remotely, though, takes their usefulness to a whole new level. Whether you’re watching your pets while you’re away or allowing friends to participate in an event from the other side of the world, a web-enabled camera puts the end user in control of the experience. New release: HVAC IR Remote Module for Arduino / Raspberry Pi IR Remote is a small shield that allows you to record any infrared command sent by a remote control and resend it from the Internet. It works connected to Arduino and Raspberry Pi, and let us to control any HVAC system including heating,ventilation, air-conditioning and thermostats from the Cloud. We offer 6 different wireless interfaces to connect Arduino and Raspberry Pi to the Internet: WiFi, 3G, GPRS, Bluetooth and 802.15.4 / ZigBee. With IR Remote you can easily control our home HVAC system from a laptop, a webserver or even from your smartphone.

Cordless Drill Motor as Gear Motor The idea is to take apart a relatively cheap cordless drill and use the motor as a mains powered gear motor with arduino speed control. Step 1. Dismantle a drill. I happened to have this drill in the junk box because the battery was no longer holding it’s charge.