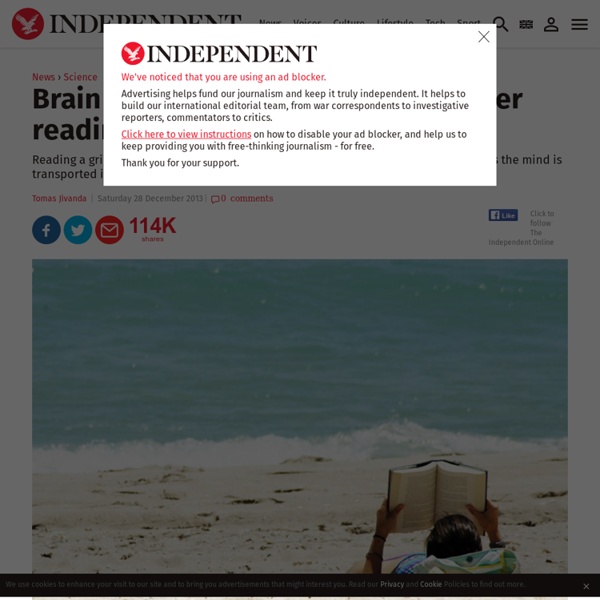 Being pulled into the world of a gripping novel can trigger actual, measurable changes in the brain that linger for at least five days after reading, scientists have said. The new research, carried out at Emory University in the US, found that reading a good book may cause heightened connectivity in the brain and neurological changes that persist in a similar way to muscle memory. The changes were registered in the left temporal cortex, an area of the brain associated with receptivity for language, as well as the the primary sensory motor region of the brain. Neurons of this region have been associated with tricking the mind into thinking it is doing something it is not, a phenomenon known as grounded cognition - for example, just thinking about running, can activate the neurons associated with the physical act of running. “We already knew that good stories can put you in someone else’s shoes in a figurative sense. Reuse content Related:  reading

Lonely? Or Lots Of Friends? Brain Structure Varies With Social Connectivity, Scientists Find People who have extensive social networks have more connections in some parts of the brain, according to a new study. But researchers don't know yet what comes first - the brain structure or the social connections. (Photo: Petr Kratochvil / Rhonda J. Miller) Having a wide circle of friends and thriving in social situations might mean you have more white-matter pathways in your brain. Maybe those white-matter pathways — the nerve fibers that connect the different regions of the brain — are one factor that makes it easier to function in social settings, or maybe spending lots of time in social situations creates more of those pathways. Either way, a new study has found that certain regions of the brain are bigger and better connected in people with a large network of friends and good social skills than in people with fewer friends, according to research presented at Neuroscience 2013, the annual meeting of the Society for Neuroscience in San Diego.. Like Us on Facebook

6 Techniques for Building Reading Skills—in Any Subject As avid lovers of literature, teachers often find themselves wanting to impart every bit of knowledge about a well-loved text to their students. And this is not just an ELA issue—other disciplines also often focus on the content of a text. However, teaching reading skills in English classes and across the disciplines is an almost guaranteed way to help students retain content. Unfortunately, the tendency to focus on the content is a real enemy to the ultimate goal of building reading skills. Without a repertoire of reading strategies that can be applied to any text, students are being shortchanged in their education. Teach Close Reading Skills Guide students in annotation by directing them to do more than highlight or underline. The list of possibilities is endless—the point is to have students form their own process when approaching a text. Appeal to the Senses Guide Students in Setting Reading Goals Vary Text Length Offer Opportunities for Choice Reading Assess Content and Skill

Sherlock Holmes is public property … but steer clear of Watson's second wife | World news Prospective authors of Sherlock Holmes fan fiction take heed: under a new court ruling, you may write that Sherlock Holmes was a cocaine-addicted martial arts aficionado cohabiting occasionally at 221B Baker Street, with a friend called Dr Watson. You may not, however, freely describe Dr Watson's own athletic background, the juicy fact of his second marriage or the circumstances of Holmes's retirement. A US district court in Illinois found itself wading into the details of the fictional detective's imaginary life this week in a copyright ruling on a forthcoming collection of original short stories featuring Holmes characters. An editor of the new book, In the Company of Sherlock Holmes, asked the court in effect to enlarge the elements of the Holmes story that are in the public domain. Most of Sir Arthur Conan Doyle's creation already is in the public domain. In protecting the last ten stories, however, Castillo reinforced access to the rest of the Holmes oeuvre.

Life Advice From Jim Whittaker Integrated Skills Through Literature: “All Summer in a Day” – On the same page The story of Margot – of (in)difference, (in)justice, hope – was not unfamiliar to me but was brought to my attention during a workshop a few years ago and have since used it in my classes. Perhaps one of the reasons why Ray Bradbury’s “All Summer in a Day” (1954) works so well with teenage students is because they can easily relate to it from different perspectives. Despite the richness of vocabulary, it is also a text that is easy to read at language levels as low as B1, with the students being able to reconstruct the key elements of the story and a good amount of details without having to understand every single word. The ending is in fact a rather open one, and it is at this point of Bradbury’s story that I decided to start reading the last time I used it. Part 1: from “A boom of thunder startled them…” to “… and let Margot out”Part 2: from “’Ready, children?’ 1. 2. 3. 4. 5. 6. 7. 8. Speaking 9. All Summer in a Day Worksheets.pdf All Summer in a Day Like this: Like Loading...

What your freaky sex dreams really mean :: Sex dreams decoded There are two vivid sex dreams that I have. The first is about Sean Bean who I had a crush on as a teen. Usually it involves Sean, dressed in a uniform, meeting me at a night club, gently pushing my hair behind my ear, caressing my face then letting his hand wander further down. I wake up before the sex actually happens feeling flustered – in the best possible way. At the other end of the spectrum is a recent sex dream I’ve been having about my partner. Why do I have these dreams and more importantly do they mean something? Whether you're in a relationship or single, all women have sex dreams. “But in fact, if you're having a lot of sex dreams it can simply mean you're feeling extra aroused or that your mind and body are hoping to snap you out of a dry spell.” Hormones play a huge role too. According to a recent study, Dreaming Of You by Dylan F. A hidden message Other sex dreams might not be about sex at all. Ex sex - Don't panic, this doesn't necessarily mean you want him back.

Simple Ways To Reinvent Yourself At Work