15 Books That Will Change the Way You Look at Robots 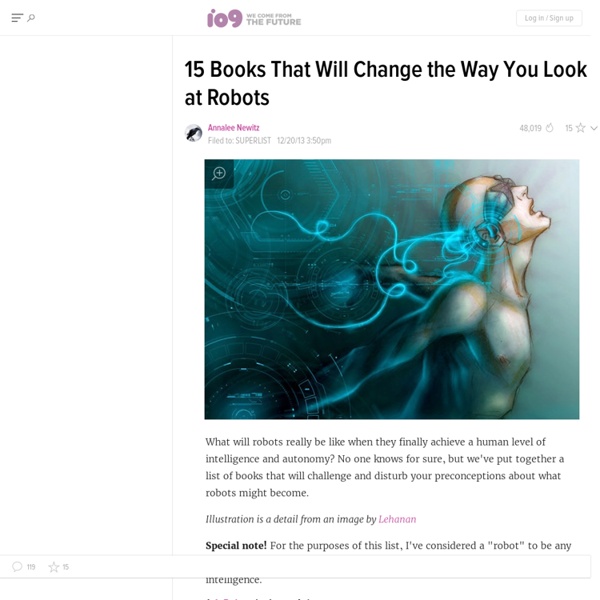 10 Great Post-Apocalyptic Science Fiction Novels Books It’s a classic theme of science fiction: something really, really bad happens, and mankind is knocked back to the Stone Age. Of course, with the dropping of atomic bombs by the U.S. to end World War II, people came to realize that for the first time Man himself possessed the power to bring about a global cataclysm. And science fiction wasted no time in examining the possible effects (there were speculative stories in print well before the Manhattan Project was even conceived). But nuclear holocaust isn’t the only way Man’s thin veneer of civilization can be stripped by catastrophe. It may have even already happened in our past (the vast majority of cultures have a Great Flood in their mythos).

Your Picks: Top 100 Science-Fiction, Fantasy Books More than 5,000 of you nominated. More than 60,000 of you voted. And now the results are in. The winners of NPR's Top 100 Science-Fiction and Fantasy survey are an intriguing mix of classic and contemporary titles. Over on NPR's pop culture blog, Monkey See, you can find one fan's thoughts on how the list shaped up, get our experts' take, and have the chance to share your own. Sorry, Ebooks. These 9 Studies Show Why Print Is Better Don’t lament the lost days of cutting your fingers on pristine new novels or catching a whiff of that magical, transportive old book smell just yet! A slew of recent studies shows that print books are still popular, even among millennials. What’s more: further research suggests that this trend may save demonstrably successful learning habits from certain death. Take comfort in these 9 studies that show that print books have a promising future: Younger people are more likely to believe that there’s useful information that’s only available offline. While 62 percent of citizens under 30 subscribe to this belief, only 53 percent of those 30 and older agree.

Free Philip K. Dick: Download 13 Great Science Fiction Stories Although he died when he was only 53 years old, Philip K. Dick (1928 – 1982) published 44 novels and 121 short stories during his lifetime and solidified his position as arguably the most literary of science fiction writers. His novel Ubik appears on TIME magazine’s list of the 100 best English-language novels, and Dick is the only science fiction writer to get honored in the prestigious Library of America series, a kind of pantheon of American literature. If you’re not intimately familiar with his novels, then you assuredly know major films based on Dick’s work – Blade Runner, Total Recall, A Scanner Darklyand Minority Report. Today, we bring you another way to get acquainted with his writing. The world’s required reading list: The books that students read in 28 countries In the US, most students are required to read To Kill a Mockingbird during their school years. This classic novel combines a moving coming-of-age story with big issues like racism and criminal injustice. Reading Mockingbird is such an integral part of the American educational experience that we wondered: What classic books are assigned to students elsewhere?

Short Stories Online Homepage > Resources > Web Sites > Short Stories Online These Philip K. Dick stories come from Project Gutenberg and are stories that were written early in his career. For more reading formats, visit that site. Only html and text are provided here. 7 Fiction Books That Will Light You On Fire – Personal Growth – Medium Besides reading to feel, most of us read to learn. We want to know what we need to know when we need it, and so we keep pushing the number of books. Higher. One more. Just one more. We read books recommended by billionaires, books validated by bestseller status and books our idols tell us to read. A Visual Timeline of AI Predictions in Science Fiction As anyone who’s started a company knows, choosing a name is no easy task. There are many considerations, such as: Are the social handles and domain name available?

How Frog and Toad Author Arnold Lobel Explored Gay Intimacy in His Work Arnold Lobel / Harper Collins In the enlightened year of 2016, we tend to think of the closet as being a uniformly negative space, a shadowy den of oppression and denial from which queer people—if they want to be mentally and ethically whole—must eventually emerge. And while that view seems largely accurate, it’s at the same time true that the struggle to come out, especially in less welcoming eras, has in many cases driven artists to produce work of great insight and poignancy—work that most of us, on balance, are glad exists in the world. J. Bryan Lowder is a Slate associate editor and the editor of Outward. He covers life, culture, and LGBTQ issues.

How to Build a Universe That Doesn't Fall Apart Two Days Later First, before I begin to bore you with the usual sort of things science fiction writers say in speeches, let me bring you official greetings from Disneyland. I consider myself a spokesperson for Disneyland because I live just a few miles from it—and, as if that were not enough, I once had the honor of being interviewed there by Paris TV. For several weeks after the interview, I was really ill and confined to bed. I think it was the whirling teacups that did it. Elizabeth Antebi, who was the producer of the film, wanted to have me whirling around in one of the giant teacups while discussing the rise of fascism with Norman Spinrad... an old friend of mine who writes excellent science fiction. We also discussed Watergate, but we did that on the deck of Captain Hook's pirate ship.

The Best Illustrations from 150 Years of Alice in Wonderland On July 4, 1862, English mathematician and logician Charles Dodgson boarded a small boat with a few friends. Among them was a little girl named Alice Liddell. To entertain her and her sisters as they floated down the river between Oxford and Godstow, Dodgson fancied a whimsical story, which he’d come to publish three years later under the pseudonym Lewis Carroll.