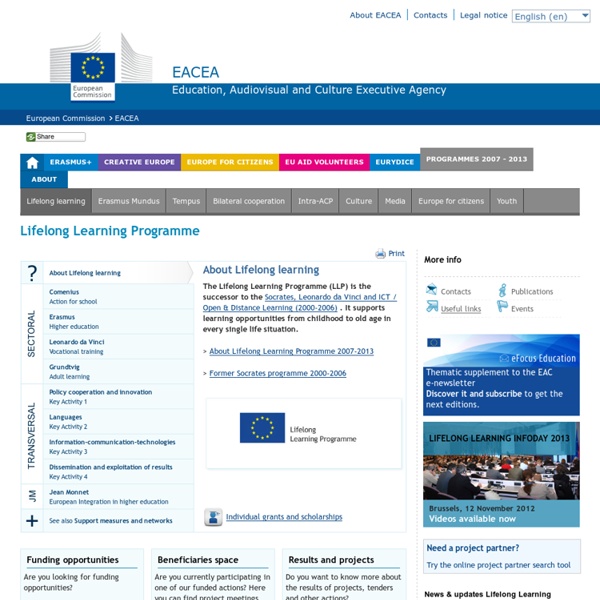 Comenius - Action for school The Comenius programme focuses on the first phase of education, from pre-school and primary to secondary schools. It is relevant for all members of the education community: pupils, teachers, local authorities, parents associations, non-government organisations, teacher training institutes, universities and all other educational staff. Learn more about Comenius Erasmus - Higher education Erasmus is the EU's flagship education and training programme in the field of higher education. Individual grants and scholarships are managed by the National Agencies (please click the link "Individual grants and scholarships" below to contact them), while Erasmus centralised actions designed to support cooperation projects are managed by the EACEA. Learn more about Erasmus centralised actions Leonardo da Vinci - Vocational training The Leonardo da Vinci programme links policy to practice in the field of vocational education and training (VET). Learn more about Leonardo da Vinci

Go Infinitesimals at Sensei In combinatorial game theory (CGT) infinitesimals are games of temperature zero where the whole point is to get the last move. (The winner always moves to a score of 0, and so does not win on points.) The simplest infinitesimal is {0|0}, called STAR (*). Top Ten Reasons To Play Go 1. Go is the simplest of all games. When we play go, we try to surround territory and to avoid being surrounded.

To Test a Powerful Computer, Play an Ancient Game DEEP BLUE's recent trouncing of Garry Kasparov sent shock waves through the Western world. In much of the Orient, however, the news that a computer had beaten a chess champion was likely to have been met with a yawn. While there are avid chess players in Japan, China, Korea and throughout the East, far more popular is the deceptively simple game of Go, in which black and white pieces called stones are used to form intricate, interlocking patterns that sprawl across the board. So subtle and beautiful is this ancient game that, to hear aficionados describe it, Go is to chess what Asian martial arts like aikido are to a boxing match.

Game theory Game theory is the study of strategic decision making. Specifically, it is "the study of mathematical models of conflict and cooperation between intelligent rational decision-makers."[1] An alternative term suggested "as a more descriptive name for the discipline" is interactive decision theory.[2] Game theory is mainly used in economics, political science, and psychology, as well as logic, computer science, and biology. The subject first addressed zero-sum games, such that one person's gains exactly equal net losses of the other participant or participants. Today, however, game theory applies to a wide range of behavioral relations, and has developed into an umbrella term for the logical side of decision science, including both humans and non-humans (e.g. computers, animals).

Some Differences Between Experts and Novices Harrisburg Presentation Resources Here are some resources from my presentation in Harrisburg. Defining and Exploring Gamification from Karl Kapp Here is some additional information. Articles and Blog Entries of Interest 8 Types of Stories to Effect Change Storytelling and Instructional Design Eight Game Elements to Make Learning More Intriguing Games, Gamification and the Quest for Learner Engagement Gamification, […] Continue Reading →

The Future Of Storytelling: Immersion, Integration, Interactivity, Impact As technology becomes more advanced and more accessible across multiple platforms, it’s only natural for consumers to expect increasingly higher standards of creativity and engagement from content creators. However, with social media, apps, tablets, smartphones, websites, TV, etc. all part of the audience’s viewing habit, learning how stories should be evolving and how to make narratives work across platforms is a complicated matter. A new study offers some perspectives on what audiences may be looking for in their stories. Research consultancy Latitude recently released phase one of a two-part study titled "The Future of Storytelling" that looks to uncover trends and audience attitudes about content. Overall, the study revealed that audiences are looking for a blurring of barriers between content and reality in a layered yet cohesive execution.

60 Small Ways to Improve Your Life in the Next 100 Days Contrary to popular belief, you don’t have to make drastic changes in order to notice an improvement in the quality of your life. At the same time, you don’t need to wait a long time in order to see the measurable results that come from taking positive action. All you have to do is take small steps, and take them consistently, for a period of 100 days. Below you’ll find 60 small ways to improve all areas of your life in the next 100 days.

The Useless Class It happens. You've enrolled in a completely useless class. You know the one. The Back Page By Carl Wieman In the pages of APS News and elsewhere there has been much discussion about the deficiencies of our science education system. Everyone from leaders of government, industry, and academia to concerned parents is pointing to the evidence and lamenting how these deficiencies hinder economic growth and the attainment of a scientifically literate citizenry capable of making wise informed decisions on important societal issues. Usually, such laments are accompanied with an opinion as to the source of the problem and how to solve it. One common claim is that higher education is failing because the faculty members in science care only about research and have little interest or concern with teaching. (Physics is often held out as a subject of particular criticism in this respect.) I reject this claim.

Curse of knowledge The curse of knowledge is a cognitive bias that leads better-informed parties to find it extremely difficult to think about problems from the perspective of lesser-informed parties. The effect was first described in print by the economists Colin Camerer, George Loewenstein and Martin Weber, though they give original credit for suggesting the term to Robin Hogarth.[1] History[edit]

Science, Creativity and the Real World Gifted Homeschoolers Forum Science, Creativity and the Real World: Lessons Learned from the U.S. Homeschool Community By Corin Barsily Goodwin and Mika Gustavson, MFT A great deal of concern surrounds the lack of quality in science education in the United States. Can I Learn to Read Faster and Get Through My Backlog of Books? Advice on how to read faster is all good and well, BUT: 1) Why does everything have to happen FASTER FASTER FASTER and why do you think you need to read MORE MORE MORE? It's not about quantity, but about quality. If you read good books, you're not done by the time you get to the last page.