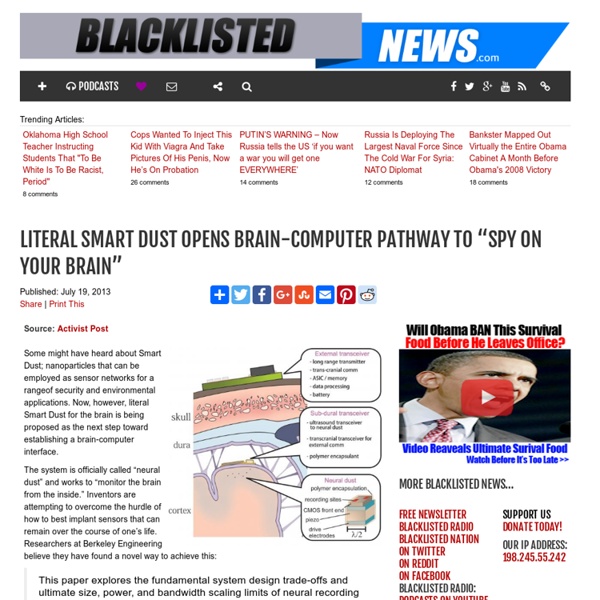 Source: Activist Post Some might have heard about Smart Dust; nanoparticles that can be employed as sensor networks for a rangeof security and environmental applications. Now, however, literal Smart Dust for the brain is being proposed as the next step toward establishing a brain-computer interface. The system is officially called “neural dust” and works to “monitor the brain from the inside.” Inventors are attempting to overcome the hurdle of how to best implant sensors that can remain over the course of one’s life. Researchers at Berkeley Engineering believe they have found a novel way to achieve this: This paper explores the fundamental system design trade-offs and ultimate size, power, and bandwidth scaling limits of neural recording systems. A network of tiny implantable sensors could function like an MRI inside the brain, recording data on nearby neurons and transmitting it back out. However, this is the first time that there is a working plan to apply Smart Dust to the human brain.

Connected Air: Smart Dust Is The Future Of The Quantified World This article is part of ReadWrite Future Tech, an annual series in which we explore how technologies that will shape our lives in the years to come are grounded in the innovation and research of today. The year is 2035, and Sgt. Bill Traverse and his team of commandos are performing a “sweep and clean” operation through a portion of the war-torn Mexico City.

Introduction To Nanotechnology Nanotechnology, also referred to as nanotech, is the science and technology of building devices, such as electronic circuits, and controlling molecular structures that are less than 100 nanometers in size. One nanometer is equal to one billionth of a meter. Nanotechnology is literally invisible to the naked eye. Nanotechnology is a newly emerging and very promising area for business investors and the struggle has begun on who owns the 'nano bank' of patents. There is a lot of debate on the future implications of nanotechnologies. Nanotechnology has the potential to create many new materials and devices with a vast range of applications in electronics and energy production, and when combined with biotechnology, aka artificial biology for medical uses, it ventures into an area of even greater debate.

Humans to become 'pets' of AI robots, says Apple co-founder Wozniak (NaturalNews) If you needed just one more reason to trash your iPhone, this is it. Apple co-founder Steve Wozniak recently told a crowd of techies in Austin, Texas, that the future of humanity will predicate on artificially-intelligent (AI) robots keeping people as "pets" - and Wozniak says he's actually looking forward to this grim, robot-dominated future. Building upon Apple's "Siri" concept, which is AI in its infancy, Wozniak's vision for 100 years from today is that humans will be literally owned by AI robots, much like how humans currently own dogs or cats. Robots will be in charge, in other words, and humans will be their slaves. And all of this will somehow be "really good for humans," in Wozniak's view. Speaking at the Freescale Technology Forum 2015, Wozniak told eager listeners that putting robots in charge is a good thing because, by that point (100 years from now), they'll have the capacity to become good stewards of nature, "and humans are part of nature," he says.

FromTheDeskOf Dr. Hildy: NANO BUILDING BLOCKS: Polymers, Wires and Composites FROM THE DESK OF DR. Hildy®© May 12, 2015 NANO BUILDING BLOCKS: Polymers, Wires and Composites “A Collection of Updates in the Big World of Nanotechnology” In the BIG World of Nanotechnology many individual compounds are used that are known to be hazardous materials and/or toxic substances are now being applied to the innovative and creative architectural design of bio-scaffolding, nano coatings, thin films and 3-D Bio-Printing and regular 3-D printing processes to name a few aspects of their use. In the May 2015 issue of the Smithsonian, the magazine clearly sates the “Future is Here” as it specifically addresses topics of communicating brain to brain; farm to table organic suburbs; made to order bones and organs and fighting famine and drought with satellites. In each of these processes a form of a nano advanced materials is used as a composite composed of a base polymer (of a known plastic raw materials).

Doctor Uses Robot to Stitch a Grape Back Together Watch a doctor use the da Vinci Surgical System to stitch a grape back together. The robotic technology is designed to help surgeons perform delicate, minimally invasive surgeries. "Transhumanist Agenda" : The Smart Dust That Can Turn Everyone Into A Robot EU Panel: Human robotization, Nano implant technologies, Mind control slavery, Neurological weapons torture, Gang stalking Panel: Magnus Olsson, Dr. Henning Witte, and Melanie Vritschan from the European Coalition Against Covert Harassment with Alfred Lambremont Webre Using detailed research, the EUCACH.ORG panelists describe Transhumanist Agenda that is now using advanced scalar technologies, super quantum computers, a quantum cloud, a super grid of over 1000 grids that is connected to HAARP for global coordinated mind control of a growing population of human robots that are created via these technologies for a global control and enslavement agenda. EUCACH.ORG Panel In a 2-hour wide-ranging Panel with Alfred Lambremont Webre on the Transhumanist Agenda, Magnus Olsson, Dr.

Dubai Announces New Fleet Of “Robocops” By Joshua Krause Police in the United Arab Emirates are preparing to adopt a strange new partner. The city of Dubai has announced that they will be introducing a fleet of automated security guards in 2017, making them the first city in the world to use robotic police officers. Unlike the fearsome machines that have been frequently portrayed in movies like Robocop, these bots won’t be taking on an aggressive role (at least, not immediately). The robots will be patrolling crowded public areas, providing surveillance and acting as information terminals for tourists. The man in charge of Dubai’s “smart” unit, Colonel Khalid Nasser Alrazooqi, suggested that the robots will eventually work without any human input, and believes they will be fully implemented by the end of the decade.

A Sprinkling of Smart Dust Written by Catherine Bolgar The “Internet of Things” allows industrial companies to tune or monitor equipment and processes with sensors. But how can these be best positioned and remain connected? One solution is to use smart dust, deployed in oil refineries, industrial process automation, breweries, waste-water treatment and elsewhere. Smart dust was conceived in the mid 1990s by Kristofer S.J. Nano Brain Implant Technologies and Artificial Intelligence Screenshot from YouTube.com / Martin Vrijland In the following video, Magnus Olsson talks about “forbidden” technologies and how some of these technologies are being used to create nano brain implants and machines with artificial intelligence. Nanotechnology and artificial intelligence are two subjects that I have been slowly studying for the past few years.

Smart Dust; Old Technology The US started hearing about a substance that could be used to track the movements of any person who touches, or walks across, a contaminated surface. in 1963. It wasn’t until 1984 that they got a sample of the stuff. A defecting agent revealed that powder containing both luminol and a substance called nitrophenyl pentadien (NPPD) had been applied to doorknobs, the floor mats of cars, and other surfaces that Americans living in Moscow had touched. They would then track or smear the substance over every surface they subsequently touched. The revelation caused a scandal, not so much because of the tracking, but because of the potential health hazards of what came to be known as “spy dust.”

Chinese Factory Loses 90% of Its Workforce to Robots By Joshua Krause Ever since China joined the World Trade Organization in 2001, the US has had millions of manufacturing jobs outsourced to the growing nation. But what most Americans don’t realize is that many of these Chinese workers also feel cheated by this arrangement. They’re just as frustrated with us, because they can’t afford the products that they build for the American consumer. Over the years, this resentment has fueled a surge of labor strikes and demands for better pay for these workers. So it should come as no surprise that factory owners are more than willing to automate these jobs.