Which Programming Language Should I Learn First? 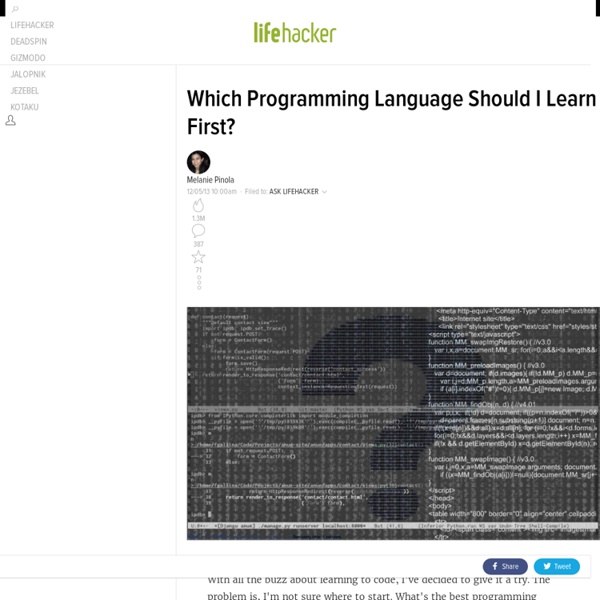 Martin O'Leary | Minecraft Antarctica Ever wanted to explore Antarctica from the comfort of your own computer? Ever felt that the real world is insufficiently cube-based? This is the answer. This is a 1:1000 scale recreation of the entire Antarctic continent (and outlying islands) in Minecraft, based on the data from the Bedmap-2 project. The vertical scale has been exaggerated by a factor of 10. You’ll need a copy of Minecraft, which can be purchased direct from minecraft.net. You can either download the map file, or connect to a server. If you want to run your own copy, Minecraft Antarctica comes as a custom map file. You should then be able to play in the map by starting Minecraft, choosing “Singleplayer”, and selecting the map (named “Antarctica”) from the list. You should start at Rothera Point on Adelaide Island (67°34’S, 68°08’W), the location of the main British Antarctic Survey base, and quite a scenic area. The map defaults to Creative Mode, with cheats enabled. To teleport, press T to bring up the chat console.

Here's a list of 223 free online programming/CS courses (MOOCs) with feedback(i.e. exams/homeworks/assignments) that you can start this month (Feb 2016) : learnprogramming Python Data Analysis Library — pandas: Python Data Analysis Library Dans Tools - Online tools for users and developers. Thanks for visiting Dan's Tools. Below is a collection of various tools that I have found helpful for many years. They are all available here for free for the developers and users out there who might find them useful. Keep track of your site inside adblock lists. Encode and decode a string as base64. Convert between hex, binary, and decimal quickly and easily. An HTML, CSS, Javascript playground to test and share code snippets. Find the perfect color palette for your project. Search for web safe fonts and other web fonts. Compress your css to make your website faster to load. Compare documents using diff and easilty visualize the differences. Determine whether an email address actually exists, and make sure it is valid. Upload an image and have it turned into Favicons and App Icons, and get the proper code to use them. Convert your video, audio, image, and document files between all formats. Easily create your .htaccess file with all the options you need. Format HTML code to make it ledgible.

Microsoft's CAPTCHA successfully broken UPDATE: Gmail, Yahoo and Hotmail's CAPTCHA broken by spammers. Jeff Yan and Ahmad Salah El Ahmad, at the School of Computing Science, Newcastle University, England recently published a research paper entitled "A Low-cost Attack on a Microsoft CAPTCHA", demonstrating how they've managed to attack the Microsoft's CAPTCHA used on several of their online services such as Hotmail and Windows Live, with over 92% recognition rate. In this paper, we analyse the security of a text-based CAPTCHA designed by Microsoft and deployed for years at many of their online services including Hotmail, MSN and Windows Live. Realizing the potential for massive abuse from spammers, the researchers notified Microsoft in Sept, 2007 then awaited the response publishing the paper last month.

2-Player Bartop Arcade Machine (Powered by Pi) The 'Galactic Starcade' is a DIY retro bartop arcade cabinet for two players. It is powered by the Raspberry Pi micro-computer and plays multiple types of retro games - primarily NES, SNES, Megadrive and arcade (MAME) games. Using a Pi keeps the cost, weight and complexity to a minimum but the cabinet could also house a more powerful PC-based system to play more modern games. I've always wanted an arcade machine for authentic retro gaming but they take up a lot of space and cost a lot of money. Making a custom bartop cabinet like this one solves both of those problems. It also lets you play potentially thousands of games on a single machine. This is my first big DIY project and my first Instructable - be nice! UPDATE #1: Thanks for the great reception to the Starcade everyone! UPDATE #2: After a ton of requests I have finally got round to making some handy PDF guides which show all the necessary dimensions to make this arcade machine even easier to build yourself!

Cloud computing In common usage, the term "the cloud" is essentially a metaphor for the Internet.[1] Marketers have further popularized the phrase "in the cloud" to refer to software, platforms and infrastructure that are sold "as a service", i.e. remotely through the Internet. Typically, the seller has actual energy-consuming servers which host products and services from a remote location, so end-users don't have to; they can simply log on to the network without installing anything. The major models of cloud computing service are known as software as a service, platform as a service, and infrastructure as a service. These cloud services may be offered in a public, private or hybrid network.[2] Google, Amazon, IBM, Oracle Cloud, Rackspace, Salesforce, Zoho and Microsoft Azure are some well-known cloud vendors.[3] Advantages[edit] The cloud also focuses on maximizing the effectiveness of the shared resources. Hosted (Host) services[edit] History[edit] The 1950s[edit] The 1960s–1990s[edit] The 1990s[edit]