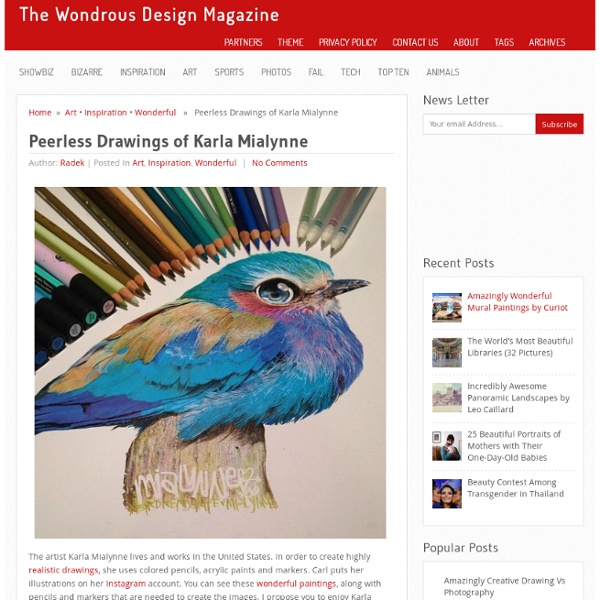 The artist Karla Mialynne lives and works in the United States. In order to create highly realistic drawings, she uses colored pencils, acrylic paints and markers. Carl puts her illustrations on her Instagram account. You can see these wonderful paintings, along with pencils and markers that are needed to create the images. I propose you to enjoy Karla Mialynne’s amazing drawings and get inspired

This Is What Happens When You Mix Soap, Oil & Ink Together Whilst you use ink in your stationary, oil for your bike and soap to wash yourself everyday, its rare that all three liquids come into contact with one another. What would happen if they did? Would blending ink, soap and oil produce something similar? Mathematically Precise Kinetic Sculptures and Transformable Objects by John Edmark If you enjoyed John Edmark’s trippy 3D-printed zoetrope sculptures last week, you might also enjoy some of his kinetic sculptures that rely on excruciatingly precise laser-cut wood and internal mechanisms to create optical illusions and other unexpected behaviors. Edmark describes these as “instruments that amplify our awareness of the sometimes tenuous relationship between facts and perception.” Here are three of my favorites, but you can see many more on his Vimeo page.

Barnaby Furnas The explosive moment versus painting's innate stillness has been a central concern of Barnaby Furnas's work over the past decade. Drawing on US history and culture, the American artist presents restless, radiant paintings of subjects including Civil War-era battles and high-octane stadium rock gigs, chronicling crescendos of excitement - religious, political, sexual - as they career towards tipping points of uncertain outcome. These are at once brutal and elegant works, bound up with the excesses of the world yet brought into being through the prism of art history. From Cubism's fracturing of the picture plane, through Futurism's attempts to capture movement, via 'blood and guts' outpourings of Abstract Expressionist and the transcendental spaces of colour field painting, Furnas entwines history with art history in provocative combinations of narrative and form. Born in Philadelphia in 1973, Barnaby Furnas lives and works in New York.

how to draw female comic characters (according to Wizard)... brown_betty asked for examples "to illustrate the exactly how and why female comic characters are illustrated differently than the male." And I thought, really, what's better to illustrate these things than the books teaching the style in the first place? A while ago I posted some scans from Wizard How To Draw series on drawing female superheroes (here and here), and I thought I'd post a bunch more from the first book of the series on "How To Draw: Heroic Anatomy". Rembrandt Self-portraits in chronological order Self-portraits in chronological order by REMBRANDT It is particularly interesting if the various stages of the creative renewal of an artist can be followed on self-portraits so that the change in style and the change in maturity can be studied simultaneously.

19 Foolproof Beauty Tricks That Will Make You Look Instantly Better in Photos 1. Apply your eye makeup first so stray eyeshadow doesn't mess up your foundation. "Doing your eye makeup before you apply your foundation allows your skin to look it's freshest, since you can wipe away any eye shadow or mascara residue that falls onto your cheeks without a trace," says Georgie Eisdell, who makes up the faces of Dianna Agron, Carey Mulligan, Amanda Seyfried, just to name a few. "Just remember that less is best, so start with a softly-shaded shadow and then build on that to be sure you don't apply too much. Overdoing your makeup can instantly make you look older in real life and especially in photos." 2.