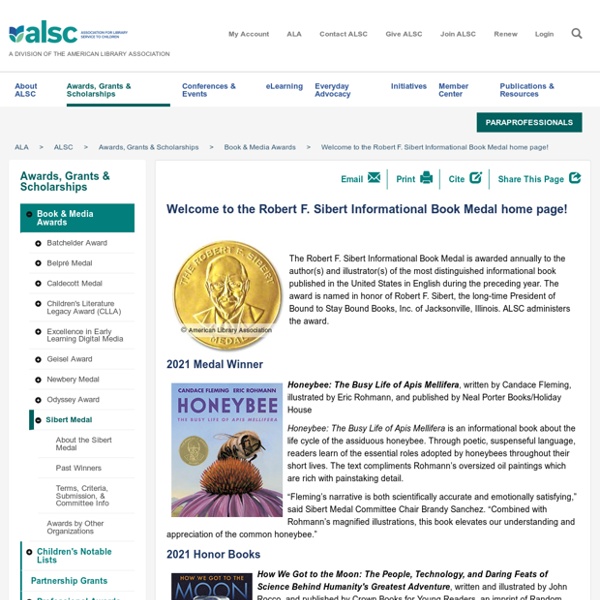 The Robert F. Sibert Informational Book Medal is awarded annually to the author(s) and illustrator(s) of the most distinguished informational book published in the United States in English during the preceding year. The award is named in honor of Robert F. Sibert, the long-time President of Bound to Stay Bound Books, Inc. of Jacksonville, Illinois. ALSC administers the award. 2021 Medal Winner Honeybee: The Busy Life of Apis Mellifera, written by Candace Fleming, illustrated by Eric Rohmann, and published by Neal Porter Books/Holiday House Honeybee: The Busy Life of Apis Mellifera is an informational book about the life cycle of the assiduous honeybee. “Fleming’s narrative is both scientifically accurate and emotionally satisfying,” said Sibert Medal Committee Chair Brandy Sanchez. 2021 Honor Books This ambitious book chronicles one of the most exciting and miraculous accomplishments in American history—the 1969 lunar landing.

Odyssey Award This annual award is given to the producer of the best audiobook produced for children and/or young adults, available in English in the United States. 2020 Odyssey Award Audiobook Hey, Kiddo: How I Lost My Mother, Found My Father, and Dealt with Family Addiction, produced by Scholastic Audiobooks, written by Jarrett J. Krosoczka and narrated by Jarrett J.

Alex Awards About the Alex Award The Alex Awards are given to ten books written for adults that have special appeal to young adults, ages 12 through 18. The winning titles are selected from the previous year's publishing. The Alex Awards were first given annually beginning in 1998 and became an official ALA award in 2002. Pura Belpré Award The award is named after Pura Belpré, the first Latina librarian at the New York Public Library. The Pura Belpré Award, established in 1996, is presented annually to a Latino/Latina writer and illustrator whose work best portrays, affirms, and celebrates the Latino cultural experience in an outstanding work of literature for children and youth. It is co-sponsored by the Association for Library Service to Children (ALSC) and the Young Adult Library Services Association (YALSA), divisions of the American Library Association (ALA), and REFORMA, the National Association to Promote Library and Information Services to Latinos and the Spanish-Speaking, an ALA affiliate. Children's Author Award | Youth Illustrator Award | Young Adult Author Award

Printz Award The Michael L. Printz Award is an award for a book that exemplifies literary excellence in young adult literature. It is named for a Topeka, Kansas school librarian who was a long-time active member of the Young Adult Library Services Association. The award is sponsored by Booklist, a publication of the American Library Association. Learn more about Michael Printz via this video from cjonline.com. Visit YALSA's Teen Book Finder Database, a one-stop shop for finding selected lists and award winners. Association for Library Service to Children (ALSC) In 1921 Frederic G.Melcher had the Newbery Medal designed by René Paul Chambellan. The bronze medal has the winner's name and the date engraved on the back. The American Library Association Executive Board in 1922 delegated to the Children's Librarians' Section the responsibility for selecting the book to receive the Newbery Medal.

Charlotte Huck Award (Fiction for Children) 2020 NCTE Charlotte Huck Awards 2020 Winner Room on Our RockWritten by Kate & Jol Temple "Everything Sad is Untrue" by Daniel Nayeri At the front of a middle school classroom in Oklahoma, a boy named Khosrou (whom everyone calls “Daniel”) stands, trying to tell a story. His story. But no one believes a word he says. To them he is a dark-skinned, hairy-armed boy with a big butt whose lunch smells funny; who makes things up and talks about poop too much. But Khosrou’s stories, stretching back years, and decades, and centuries, are beautiful, and terrifying, from the moment his family fled Iran in the middle of the night with the secret police moments behind them, back to the sad, cement refugee camps of Italy…and further back to the fields near the river Aras, where rain-soaked flowers bled red like the yolk of sunset burst over everything, and further back still to the jasmine-scented city of Isfahan. We bounce between a school bus of kids armed with paper clip missiles and spitballs to the heroines and heroes of Khosrou’s family’s past, who ate pastries that made people weep and cry “Akh, Tamar!”

Excellence in Poetry for Children (Living American Poet) Literary Merit (art and craft of aggregate work – as poet or anthologist). Creating books of poetry that demonstrate imagination, authenticity of voice, evidence of a strong persona, and universality/timelessness are essential. In short, we are looking for a poet who creates poetry books that contain clean, spare lines; use language and form in fresh ways; surprise the reader by using syntax artistically; excite the reader’s imagination with keen perceptions and sharp images; touch the reader’s emotions: a maker of word events. Poet’s or Anthologist’s Contributions.

"Rise and Fall of Charles Lindbergh" by Candace Fleming written by Candace Fleming Discover the dark side of Charles Lindbergh—one of America's most celebrated heroes and complicated men—in this riveting biography from the acclaimed author of The Family Romanov. First human to cross the Atlantic via airplane; one of the first American media sensations; Nazi sympathizer and anti-Semite; loner whose baby was kidnapped and murdered; champion of Eugenics, the science of improving a human population by controlled breeding; tireless environmentalist. Charles Lindbergh was all of the above and more. NBGS Lists - CL/R SIG Past & Present NBGS Books 2021 Notable Books for a Global Society ​Sharuko: El Arqueólogo Peruano/Peruvian Archaeologist Julio C. TelloBy Monica Brown Illus. Elisa ChavarriLee & Low Books/Children’s Book Press Woke: A Young Poet's Call to JusticeBy Mahogany L. Browne, Elizabeth Acevedo, and Olivia Gatwood Illus.

"On the Horizon" by Lois Lowry ON THE HORIZON By Lois Lowry Read by the author Hang on to those old home movies: You never know what they might hold. In 1980, years before she gained renown for her Newbery Medal-winning novels for young readers, “Number the Stars” and “The Giver,” Lois Lowry was visiting her parents’ house when her father showed her aging film reels from her childhood.