The John coltrane pentatonic -exercises and applications. Milt Jackson. Milton "Bags" Jackson (January 1, 1923 – October 9, 1999) was an American jazz vibraphonist, usually thought of as a bebop player, although he performed in several jazz idioms. 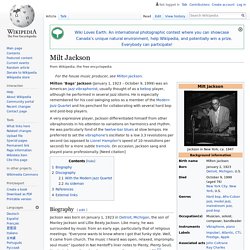 He is especially remembered for his cool swinging solos as a member of the Modern Jazz Quartet and his penchant for collaborating with several hard bop and post-bop players. A very expressive player, Jackson differentiated himself from other vibraphonists in his attention to variations on harmonics and rhythm. He was particularly fond of the twelve-bar blues at slow tempos. He preferred to set the vibraphone's oscillator to a low 3.3 revolutions per second (as opposed to Lionel Hampton's speed of 10 revolutions per second) for a more subtle tremolo. On occasion, Jackson sang and played piano professionally. Biography[edit] Jackson was born on January 1, 1923 in Detroit, Michigan, the son of Manley Jackson and Lillie Beaty Jackson. Discography[edit] With the Modern Jazz Quartet[edit] As sideman[edit] Hal Galper - What I Learned from Cannonball. YouTube. POST BOP, a jazz music subgenre. Part I Post Bop is a modern jazz style that continues the distinguishing characteristics that separate jazz from the world of pop and rock; swing rhythm and extended harmonies (9th chords 11ths, altered chords, etc). 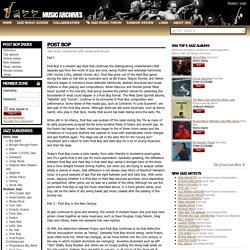 Post Bop grew out of the Hard Bop genre during the early to mid 60s as musicians such as Bill Evans, Wayne Shorter, and Herbie Hancock began to introduce more extended harmonies, abstract structures and looser rhythms in their playing and compositions. When Hancock and Shorter joined Miles Davis’ quintet in the mid-60s, that group became the perfect vehicle for extending the boundaries of what could happen in a Post Bop format. The Miles Davis Quintet albums, "Nefertiti" and "Sorcer", continue to be pinnacles of Post Bop composition and performance. The 2018 NPR Music Jazz Critics Poll. Below are the results of NPR Music's 6th Annual Jazz Critics Poll (my 13th annual, going back to its beginnings in the Village Voice). 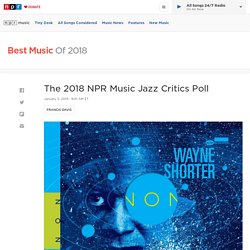 Is jazz entering a new golden age? If you think you’ve seen more attention devoted to jazz in the past year or so, you’re not wrong. 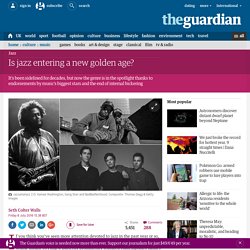 Thanks in part to a spotlight aimed by Kendrick Lamar – whose album To Pimp a Butterfly prominently featured contemporary names like pianist Robert Glasper and saxophonist Kamasi Washington – there’s been an overall renaissance in press coverage for a genre that has, in recent decades, often seemed ignored by the popular media.

Jazz’s resurgent profile, however, isn’t merely due to one rapper’s significant influence. Lamar-associate Washington has received a large amount of the recent attention mostly on the strength of the saxophonist’s 2015 triple album, The Epic. Pianist Vijay Iyer was the subject of a long feature in the New Yorker, while his collaboration with longtime experimental icon Wadada Leo Smith resulted in a “best new music” garland from Pitchfork. 20 Albums To Begin A Journey into Jazz. This is for you if you want to a journey into listening to jazz more seriously, or if a friend asks you what jazz records they should listen to in order to appreciate it more fully. 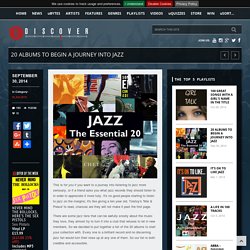 It's no good people starting to listen to jazz on the margins; it's like giving a ten year old, Tolstoy's 'War & Peace' to read, chances are they will not make it past the first page. There are some jazz fans that can be awfully snooty about the music they love, they almost try to turn it into a club that refuses to let in new members. So we decided to put together a list of the 20 albums to start your collection with. Every one is a brilliant record and no discerning jazz fan would turn their nose up at any one of them. So our list is both credible and accessible. It includes albums like Miles Davis's, Kind of Blue, Bill Evan's, Waltz For Debby and John Coltrane's, Blue Train; all three consistently make the list of the most important jazz albums ever. 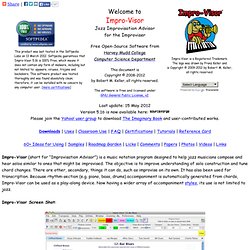