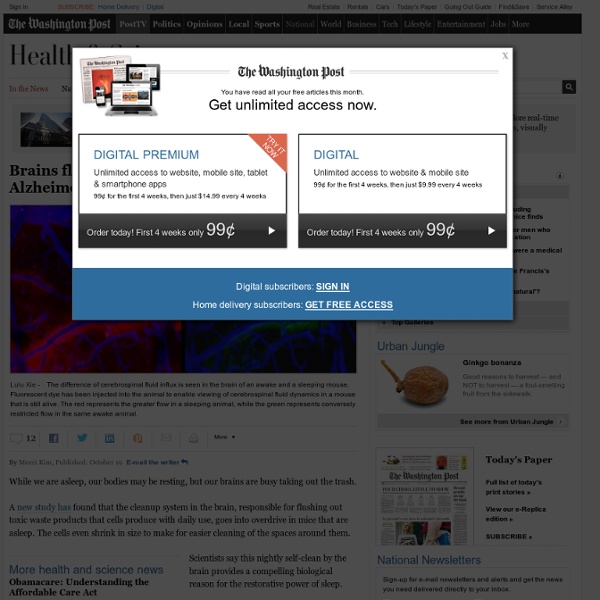 Scientists say this nightly self-clean by the brain provides a compelling biological reason for the restorative power of sleep. “Sleep puts the brain in another state where we clean out all the byproducts of activity during the daytime,” said study author and University of Rochester neurosurgeon Maiken Nedergaard. Those byproducts include beta-amyloid protein, clumps of which form plaques found in the brains of Alzheimer’s patients. Staying up all night could prevent the brain from getting rid of these toxins as efficiently, and explain why sleep deprivation has such strong and immediate consequences. Although as essential and universal to the animal kingdom as air and water, sleep is a riddle that has baffled scientists and philosophers for centuries. One line of thinking was that sleep helps animals to conserve energy by forcing a period of rest. Another puzzle involves why different animals require different amounts of sleep per night. Related:  OPTIMIZING UR SELF • Neurology • Alzheimer's

Melatonin protects brain function Sun. Sept. 29, 2013 by Michelle Marks, staff writer (NaturalHealth365) Melatonin is a hormone secreted by the pineal gland, a pine cone-shaped gland in the brain. How does melatonin improve brain function? Melatonin supports brain function via its powerful antioxidant and anti-inflammatory effects. Research shows that melatonin exhibits strong neuro-protective properties under conditions such as oxidative stress or inflammatory conditions. Melatonin also demonstrates many health benefits such as immune support, decreased risk of degenerative conditions, relief from fibromyalgia, and reduce menopausal symptoms. What factors affect melatonin secretion? Being exposed to too bright light in the evening, receiving very little day light, poor consumption of vegetables, high intake of caffeine, over consumption of alcohol, low physical activity or sedentary lifestyle and jet lag are some of the many factors that negatively influence the production of melatonin by our brain. References:1.

Inside Paul Allen's Plan to Reverse-Engineer the Human Brain - Wired Science In 2003, Microsoft cofounder Paul Allen spent $100 million to build the Allen Institute for Brain Science in Seattle. With laser-equipped microscopes and custom brain-slicers, the institute has mapped the brains of mice, monkeys, and humans, showing which genes are turned on—and where—to better understand vision, memory, autism, and other neural phenomena. Last year Allen ponied up another $300 million to aim the institute at a narrower but more ambitious goal: a complete understanding of how the mouse brain interprets visual information. To succeed, they’ll have to go beyond static gene maps and learn how to watch a living brain in action. The new method will track electrical activity in neurons—not just in one mouse but many. Of all the things you could have invested in, why brain research? Well, as a programmer you’re working with very simple structures compared to the brain. How do you think your investment has paid off so far? Oh, I think it’s had a real impact.

10/23/13, 22:06--This is a more extensive Tibetan Breathing for Health What is Tibetan Breathing? Tibetan Breathing is self-help healing technique that expands your lungs and increases oxygen in your blood. All your organs (and your brain) benefit from more oxygen and work better. Daily practice of this breathing program has been shown to calm the nervous system, regulate heart activity, relax muscles and spasms, oxygenate the blood, reduce blood pressure, stimulate digestion and help to clean the body of toxins. How to perform Tibetan Breathing Sit comfortably with your spine straight and your feet apart and flat on the floor. This simple breathing exercise establishes an equilibrium between positive and negative currents throughout the body. You can perform Tibetan Breathing while sitting, laying down or even while walking (keep your hands in your pockets). Note: this Tibetan Breathing Technique is a very powerful energizer which should not be overdone. Also see our recommendations for the 5 Tibetan Rites of Rejuvenation

Sleep Drives Metabolite Clearance from the Adult Brain The conservation of sleep across all animal species suggests that sleep serves a vital function. We here report that sleep has a critical function in ensuring metabolic homeostasis. Using real-time assessments of tetramethylammonium diffusion and two-photon imaging in live mice, we show that natural sleep or anesthesia are associated with a 60% increase in the interstitial space, resulting in a striking increase in convective exchange of cerebrospinal fluid with interstitial fluid. In turn, convective fluxes of interstitial fluid increased the rate of β-amyloid clearance during sleep. The purpose of sleep remains mysterious. The top 20 leafy greens and herbs to juice Mon. Dec. 9, 2013 by Linda Kordich (NaturalHealth365) Juicing a variety of leafy greens and herbs is important for our overall health – especially when it comes to juicing and blending on a regular basis. Every vegetable and fruit has its own nutritional and chemical signature. For example, a pineapple has a different chemical structure than an orange, and a carrot has a different chemical make-up than a radish – the list goes on and on. Leafy greens, for example, need to be rotated weekly. The next week, alternate to another different three greens. Remember, every green, fruit and vegetable has different chemical structure to them. So, try not to juice just kale – as many of us do – because we get used to a certain taste, and most of us know that kale is nutritionally high in protein and other nutrients, but that does not mean we should be ‘exclusively’ juicing it. Starting with leafy greens: 1. 2. 3. 4. 5. 6. 7. 8. 9. Here are some herbs to try: 10. 11. 12. 13. 14. 15. 16. 17. 18. 19.