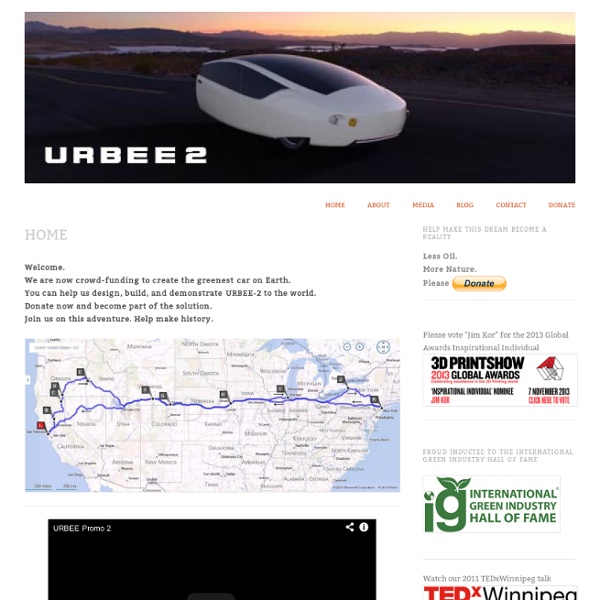 Related:  On Land by Auto

Nissan NV200 Concept Van First Info Revealed A typical small van is little more than an empty box on wheels: functional, certainly, but seldom innovative or smart. But designers from Nissan Design Center (NDC) in Japan and Nissan Design Europe in the UK had other ideas. In creating NV200, the joint team have devised a concept that could revolutionise the small van market. "A commercial vehicle has a specific job to perform, but that's no reason to design a purely rational vehicle with no warmth. At a glance Mobile office and van in one unique package Sliding cargo 'pod' extends to reveal... ... When world-renowned marine biologist and underwater photographer Dr Alex Mustard sets off on an expedition, he takes with him a mountain of equipment. He needs underwater cameras and lights for his photography plus scuba diving equipment such as wet suits, flippers, masks, air tanks and breathing apparatus. In fact, he takes enough gear to fill a small van. In Japan, the team was led by Ryoichi Kuraoka, Product Chief Designer.

Nissan NV200 Van Leasing | NV200 Lease | NV200 Contract Hire Some of the best Nissan NV200 van leasing deals and NV200 contract hire finance offers. The NV200 van is Nissan’s rival to the Ford Transit Connect and Volkswagen Caddy. At 4,400mm in length, the Nissan is within 100mm of the length of the Connect. However, the load bed is 300mm longer. The NV200’s loading height is also 78mm lower than the Transit Connect. The NV200 is powered by a 1.5-litre diesel engine with a claimed CO2 emissions figure of 139g/km. = Hot Offer University of Oxford develops low-cost self-driving car system Oxford University’s Mobile Robotics Group (MRG) has developed an autonomous navigation system for cars at a build cost of only £5,000 (US$7,700). Installed in a production Nissan LEAF, the robot car uses off the shelf components and is designed to take over driving while traveling on frequently used routes. View all Automated driving technology already exists on several different levels – from the assisted driving systems found in some upmarket cars to full-blown robots that can drive themselves. The latter have become so advanced in recent years that some U.S. states have legalized their use on public roads. Led by Prof. The car chosen for MRG’s tests was a modified Nissan LEAF. The technology is based on “autonomous perception.” These sensors feed data to the three computers that are at the heart of the autonomous driving system. Together these sensors and computers are used to build up a three-dimensional map of the route. Source: MRG

Elio Motors highlights its $7,000, 84-mpg 3-wheeled car Original Batmobile to go under the hammer In the past few years, not only has the Corvette-like Batmobile from Batman Returns been put up for auction, but a jet-powered replica of that same style of Batmobile has also been created. A drivable copy of the Dark Knight-era Tumbler has likewise been built, along with a working replica of the associated Bat Pod motorcycle. For many people, however, the only “true” Batmobile is the original version driven by Adam West in the 1960s TV series – and it’s about to be put on the auction block, for the first time ever. View all Unlike the versions from the 80s and beyond, the original Batmobile started life as something else – the one-of-a-kind 1955 Lincoln Futura concept car. Created by the Ford Motor Company, the Futura served as a showcase and test bed for technological concepts that might or might not make their way into production cars. A replica of the Lincoln Futura In 1959, the now-red car made a cameo in the movie It Started with a Kiss. Source: Barrett-Jackson

LA Design Challenge 2012 puts out APB for patrol vehicles of 2025 The California Highway Patrol could expect an influx in the number of hopeful applicants in the future if any of the entries in this year’s LA Design Challenge were to enter service. This year’s challenge asked automotive design studios from around the world to create “a highway patrol vehicle that meets the challenges of a specific region’s transportation and societal conditions in 2025.” Having already taken a look at the Ener-G-Force concept from Mercedes-Benz, we assemble a line up of the other entries. View all E-Patrol (Human-Drone Pursuit Vehicle) from BMW Group We recently got a sneak peek at the two-man bobsled designed by BMW Group DesignworksUSA and have to say there appears to be at least a passing similarity between it and the group’s LA Design Challenge entry. Volt Squad from General Motors Working the name of the Volt electric vehicle nicely into its entry, GM’s concept isn’t just one vehicle, but three. Honda CHP Drone Squad from Honda North America Source: LA Auto Show

10 Unbelievable Scenes of Cars Hit From Above - Oddee.com (car accident, crash...) Are all of you folks wondering how that rock smashed this poor Toyota Yaris? Apparently, a lorry loaded with rocks accidentally dropped the 8 ton stone on the small car. "The driver said he looked in his mirror and saw the rock slipping but it was on the car before he could do anything. If anyone had been in it, they would not have stood a chance," said a photographer who saw the whole thing. The good news is that the Yaris was parked, but the bad news came after the driver saw it. Diana Durre of Chambers, Nebraska died after a 75-foot (23 m) Taco Bell sign fell on top of the truck cab she was in. A giant Nike soccer ball falls on top of a car and completely destroys its body. From the film called "The Other Guys". Was this a new AC installation for the car gone wrong? This is why you don't want to use your phone while driving! This gigantic fork fell from the sky and struck this red car. Flying boat. Giant muffin crushes car.

"Smart Highways" will glow in the dark, plus a lot more Dynamic Paint is one of the innovations planned for the Smart Highway project Image Gallery (6 images) If you've ever wished that roads would do something instead of just lying there, a pair of Dutch design firms have the answer. Studio Roosegaarde and Heijmans Infrastructure are developing what they call a “Smart Highway.” View all The firms see the Smart Highway as less of a product than a laboratory to try out new technologies for the “Route 66 of the future.” One of these is “Dynamic Paint,” seen at the top of the page, which is temperature sensitive. Then there is the “Glow-in-the-Dark Road,” which is what it says on the box. Another way to cut down on lighting is the “Interactive Light.” The “Wind Light” takes this a step further with pinwheel generators set in the verge like flowers. The Smart Highway also has an “Induction Priority Lane” for electric cars, with induction coils embedded under the tarmac to charge the cars as they drive along. Source: Studio Roosegarde

Caterham and Renault teaming up to bring back the Alpine The Alpine car brand is coming back. Renault and the Caterham Group have announced a new joint venture to build sports cars beginning in January 2013 at Renault’s Alpine plant in Dieppe, Normandy. The partnership between Renault and Caterham involves the latter holding a 50 percent stake in the new business called the Société des Automobiles Alpine Caterham. View all Building on their Formula 1 partnership, the companies hope that this venture will allow them to combine their expertise to build cars that are “distinctive, differentiated, and carry the respective DNA of Alpine and Caterham Cars.” The Renault Alpine A110-50 The next step for the companies will be a feasibility study by Renault Sport Technologies and Caterham Technology & Innovation on the joint development of a sports car. The video below shows Renault and Caterham Group announcing their partnership. Source: Renault About the Author David Szondy is a freelance writer based in Monroe, Washington. Post a CommentRelated Articles

Hyundai reveals new production Veloster RE:MIX for under US$20k Hyundai has shown off a new version of its Veloster at the Specialty Equipment Market Association (SEMA) Show in Las Vegas. Unlike many of the interesting cars shown off at SEMA, this one is actually going into production. The Veloster RE:MIX is scheduled to bring its interesting style elements to U.S. dealerships in December. View all Hyundai has its crosshairs aimed squarely at the young car buyer with this one. First, let's talk about the exterior – after all, that's what's going to grab attention first. As far as colors go, the Sprint Gray is exclusive to the RE:MIX. The inside has plenty of toys that you would often find in a more expensive car. The car is all about style, and unfortunately, the engine isn't going to blow anyone away. Considering the slew of options available, the price point on the new Veloster is pretty solid. Source: Hyundai

Caterham 620 R brings extreme to Goodwood For four decades, the Caterham Seven has been turning heads and packing large servings of performance into a very small package. This weekend, at the 2013 Goodwood Festival of Speed, Caterham Cars is unveiling the slightly mad Caterham Seven 620 R, which will be put through its paces by F1 Team driver Charles Pic and other drivers from the Caterham stable. Built to celebrate 40 years of the Seven, Caterham says that it’s the most extreme version in the lightweight, high-performance line ever produced. Replacing the Superlight R500 as top of the line, the 620 R continues the Seven's emphasis on light weight, accessibility, and minimalism, but pours in more horsepower and torque than any Seven has a had to handle before. The 620 R has a new gunmetal chassis with carbon-fiber wings, roll bar, an air-flow optimized nose cone and a race-developed cooling package. Caterham says that it will be offering a less daunting version of the 620 with an “S” package later this year.

Related:
Related:  On Land by Auto