Why Are Hundreds of Harvard Students Studying Ancient Chinese Philosophy? 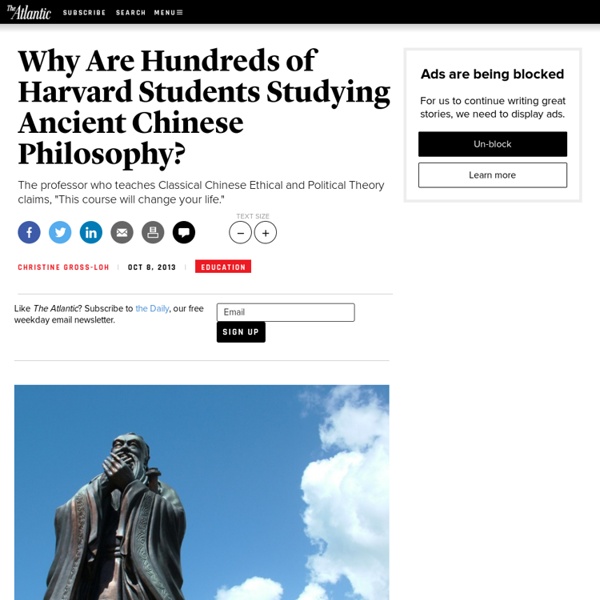 Picture a world where human relationships are challenging, narcissism and self-centeredness are on the rise, and there is disagreement on the best way for people to live harmoniously together. It sounds like 21st-century America. But the society that Michael Puett, a tall, 48-year-old bespectacled professor of Chinese history at Harvard University, is describing to more than 700 rapt undergraduates is China, 2,500 years ago. Puett's course Classical Chinese Ethical and Political Theory has become the third most popular course at the university. The only classes with higher enrollment are Intro to Economics and Intro to Computer Science. The second time Puett offered it, in 2007, so many students crowded into the assigned room that they were sitting on the stairs and stage and spilling out into the hallway. Why are so many undergraduates spending a semester poring over abstruse Chinese philosophy by scholars who lived thousands of years ago? Decisions are made from the heart.

There's More to Life Than Being Happy "It is the very pursuit of happiness that thwarts happiness." In September 1942, Viktor Frankl, a prominent Jewish psychiatrist and neurologist in Vienna, was arrested and transported to a Nazi concentration camp with his wife and parents. Three years later, when his camp was liberated, most of his family, including his pregnant wife, had perished -- but he, prisoner number 119104, had lived. In his bestselling 1946 book, Man's Search for Meaning, which he wrote in nine days about his experiences in the camps, Frankl concluded that the difference between those who had lived and those who had died came down to one thing: Meaning, an insight he came to early in life. When he was a high school student, one of his science teachers declared to the class, "Life is nothing more than a combustion process, a process of oxidation." Frankl jumped out of his chair and responded, "Sir, if this is so, then what can be the meaning of life?"

Meditation: Take a stress-reduction break wherever you are Meditation: A simple, fast way to reduce stress Meditation can wipe away the day's stress, bringing with it inner peace. See how you can easily learn to practice meditation whenever you need it most. How to Find Your Purpose and Do What You Love “Find something more important than you are,” philosopher Dan Dennett once said in discussing the secret of happiness, “and dedicate your life to it.” But how, exactly, do we find that? Surely, it isn’t by luck. I myself am a firm believer in the power of curiosity and choice as the engine of fulfillment, but precisely how you arrive at your true calling is an intricate and highly individual dance of discovery.

Six Habits Of Ambitious People Ambition gets a bad rap. The trait that pushes someone toward success can sometimes turn into a game where winning isn’t about achieving; it’s about beating the other person. Channel it correctly, however, and ambition can bring great results. "On average, ambitious people attain higher levels of education and income, build more prestigious careers, and report higher overall levels of life satisfaction," says Neel Burton, psychiatrist and author of Heaven and Hell: The Psychology of the Emotions. "Many of man's greatest achievements are the products, or accidents, of their ambition." The key is to pursue healthy ambition: "People with a high degree of healthy ambition are those with the insight and strength to control the blind forces of ambition, shaping [it] so that it matches their interests and ideals," says Burton.

Marxism Marxism is a worldview and a method of societal analysis that focuses on class relations and societal conflict, that uses a materialist interpretation of historical development, and a dialectical view of social transformation. Marxist methodology uses economic and sociopolitical inquiry and applies that to the critique and analysis of the development of capitalism and the role of class struggle in systemic economic change. In the mid-to-late 19th century, the intellectual tenets of Marxism were inspired by two German philosophers: Karl Marx and Friedrich Engels. Marxist analyses and methodologies have influenced multiple political ideologies and social movements. Marxism encompasses an economic theory, a sociological theory, a philosophical method, and a revolutionary view of social change.[1] Marxism builds on a materialist understanding of societal development, taking as its starting point the necessary economic activities required to satisfy the material needs of human society.

WISDOMCHINA Collected and translated by Yuwu Song (Copyrights Reserved) ACCUMULATIONThree feet of ice is not frozen in one day. PROVERB ACCURACYDeviate an inch, lose a thousand miles. PROVERB How to hack your passion Doing what you love’ is a sentiment that I grew up surrounded by. My parents led by example, starting their own business from our converted garage when I was just a kid. But that home business was only one of many career paths my dad tried out. Along with hobbies ranging from playing guitar to painting he seemed to always be in the pursuit of something new. The Great Philosophers 8: Theodor Adorno Theodor Wiesengrund Adorno was born in Frankfurt in 1903 into a wealthy and cultured family. His father, a wine merchant, was of Jewish origin but had converted to Protestantism at university. Teddy (as his closest friends called him) was an extremely fine pianist from a young age. Until his twenties, he planned for a career as a composer, but eventually focused on philosophy.