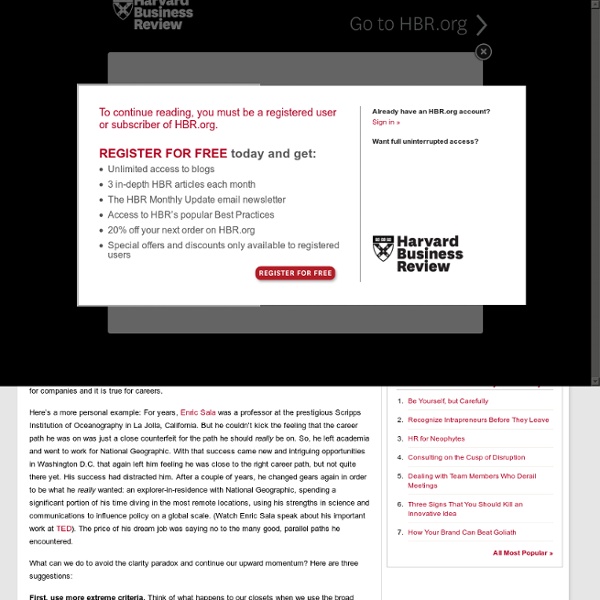 by Greg McKeown | 10:00 AM August 8, 2012 Why don’t successful people and organizations automatically become very successful? One important explanation is due to what I call “the clarity paradox,” which can be summed up in four predictable phases: Phase 1: When we really have clarity of purpose, it leads to success. Phase 2: When we have success, it leads to more options and opportunities. Phase 3: When we have increased options and opportunities, it leads to diffused efforts. Curiously, and overstating the point in order to make it, success is a catalyst for failure. We can see this in companies that were once darlings of Wall Street, but later collapsed. Here’s a more personal example: For years, Enric Sala was a professor at the prestigious Scripps Institution of Oceanography in La Jolla, California. What can we do to avoid the clarity paradox and continue our upward momentum? First, use more extreme criteria. Second, ask “What is essential?” Conducting a life audit.

davidstegall: The Four Leadership Traits of Highly Collaborative Leaders ht Collaboration taps in to a broader pool of ideas. It maximizes the talents and abilities of your people. An inclusive culture is more flexible and adaptable. People are highly motivated, work harder and are more creative. However, collaboration isn’t something you can put on. Peter Principle An illustration visualizing the Peter principle The Peter Principle is a concept in management theory in which the selection of a candidate for a position is based on the candidate's performance in his or her current role rather than on abilities relevant to the intended role. Thus, employees only stop being promoted once they can no longer perform effectively, and "managers rise to the level of their incompetence." Scope creep If budget, resources, and schedule are increased along with the scope, the change is usually considered an acceptable addition to the project, and the term “scope creep” is not used. Scope creep can be a result of: poor change controllack of proper initial identification of what is required to bring about the project objectivesweak project manager or executive sponsorpoor communication between partieslack of initial product versatility Scope creep is a risk in most projects. Most megaprojects fall victim to scope creep (see Megaprojects and Risk).

7 Simple Steps Life Transformation Guide Give me just 6 minutes and I’ll show you the primary reason why it seems so hard to find real happiness, purpose, and fulfillment. It’s not what you think! Every speck of scientific research on the subject of human potential says that we all have much more power and ability than we are currently using. Bad Service Can Be Good Business - Bill Taylor by Bill Taylor | 9:30 AM August 8, 2012 It’s hard not to be surprised by what you read in the newspapers these days, but a recent report in the New York Times left me downright floored. Richard Bove, a high-profile securities analyst who focuses on bank stocks, wrote a commentary that excoriated Wells Fargo for lousy service — so much so that he announced he’d moved his business to a different bank.

Stephen R. Covey » Blog Archive » The Leader Formula: The 4 things that make a good leader. Each week we will be asking Dr. Covey to comment on common questions. This week we ask: what makes a great leader? Q: What makes a great leader? How to Answer 'Tell Me About Yourself' in a Job Interview #WisdomWednesday This is the most popular blog post of 2014. See the rest of the top 15 here. If you have ever been in an interview, then you have undoubtedly had to answer the “Tell Me About Yourself” question. Race to Running Software Running software is the best way to build momentum, rally your team, and flush out ideas that don't work. It should be your number one priority from day one. It's ok to do less, skip details, and take shortcuts in your process if it'll lead to running software faster. Once you're there, you'll be rewarded with a significantly more accurate perspective on how to proceed.

5 Creative Coaching Techniques To Get Yourself Unstuck If you ever feel stuck on a problem or overwhelmed by the challenges you face, here are five powerful tools that can help you get unstuck fast. I’ve tried and tested them with hundreds of coaching clients over the past 15 years, so I can confidently recommend using them when you’re facing a problem or adversity, and you need to draw on your reserves of creativity and courage to overcome it. 1. The Magic Word ‘Instead’

A Seven-Step Framework for Developing Business Lawyers are always seeking ways to get more business. Having a framework to approach business development may help. Here is one I have used and enhanced with my coaching clients for the last 15 years. Although some specific activities have changed—since social media developments and increased competition—the basic approach remains the same. If you don’t know where you are going, how will you get there? Here are some examples of common business goals that many of my clients have: How Good Are Your Leadership Skills? - Leadership Training from MindTools What's your key area for improvement? © iStockphoto/hidesy Who do you consider to be a good leader? Maybe it's a politician, a famous businessperson, or a religious figure. Or maybe it's someone you know personally – like your boss, a teacher, or a friend.