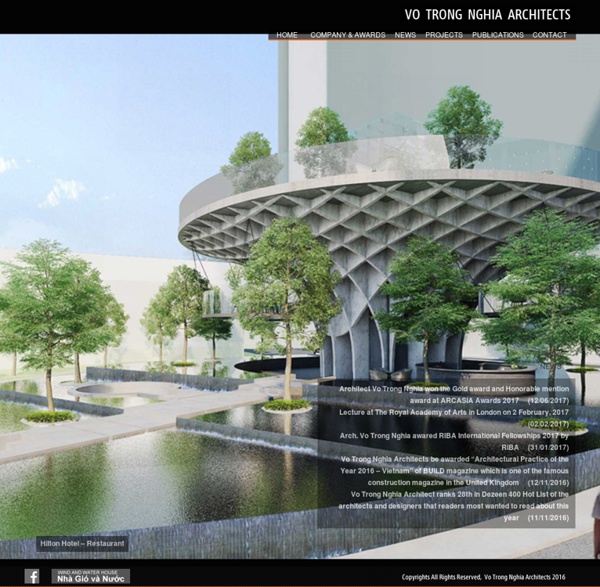 Evolution of Solar Power - Breeze This interactive infographic shows the cumulative installed solar power capacity per country, continent and the world as a whole between 1992-2015. Drag the slider or click the play button in the bottom to see how solar power capacity has changed over time. The area of each circle on the map corresponds to its respective capacity. Thanks to for providing data from 2006-2016. Would you like to embed this map on your website? Additional data from Wikipedia. About Cumulative Global Solar Power Cap. Other Global Solar Power Cap. Carrot City - Home Welcome to the Carrot City website! Carrot City is a research initiative that explores how design can enable the production of food in cities. It examines the relationships between design and urban food systems according to five categories: City, Community & Knowledge, Housing, Rooftops and Components for growing. Building on a 2008 symposium Carrot City was conceived by students and faculty at the Department of Architectural Science, Ryerson University, as an exhibit held in early 2009 at the Design Exchange in Toronto. Since then, the initiative has expanded into a traveling exhibit that has been shown at a number of venues around North America, Europe and Africa. To date, content from this exhibit has been translated into French and Arabic.

Apollo-NG - Hackerspacecraft For practical and economical reasons, Apollo-NG is based on two vehicles, just like Apollo-13: The CM pulls the LM to a destination, the LM parks in a geostationary very low earth orbit to quickly deploy the Hackerspace and its built-in lab and infrastructure, as well as R&D facilities and shelter for nomadic hackers. The CM is then free to act as shuttle, transport, workspace for 4 people or acting emergency habitat for 2 people. With the exception of diesel, to power the CM's primary engine, both systems are designed to be completely self-sustainable, harvesting solar, water, wind and biomass energy when and wherever possible. Keeping the spirit of the Apollo-Missions alive, when people all over the world, for the briefest of moments, were united when they watched the first human walking on the moon. The naming convention of Apollo-NG is an homage to the Apollo-13 mission which was called a successful failure.

Made In a Free World A Green City in China That Will Play a Major Role in Fighting Air Pollution - Dwell Covering an area of approximately 175 hectares along the Liuzhou River, Forest City will have offices, houses, hotels, hospitals, and schools that will be entirely covered by a total of 40,000 trees and close to a million plants, including over 100 species. It will be connected to the main city of Liuzhou by a rail line with electrical train cars. Greenery, which will be planted in parks and gardens along the streets, as well as over the facades of all the buildings, will contribute to improved air quality as the plants will absorb both carbon dioxide and fine dust particles. The trees and plants will also serve as a noise barrier, improve Liuzhou’s biodiversity, and help decrease the region’s average air temperatures. The new city will be able to accommodate an estimated 30,000 people, and its plant-covered buildings are expected to absorb close to 10,000 tons of carbon dioxide and 57 tons of pollutants, while producing approximately 900 tons of oxygen per year.

European Village - Ευρωπαϊκό χωριό The end of scheduled obsolescence or L’increvable – Apart from UX Who never had a problem with their washing-machine as little, as big and found themselves unable to fix it but by calling the manufacturer or worst case scenario, the plumber? Besides that, it might have been another struggle to move the machine to where it is today due to its weight through the stairs. Not only that but as the machine runs its washing program, the kinetic force produced by the spinning spool inside can not only have the whole machine run a certain distance but also leave a tornado-like trail by its rumbling on the floor. To stabilise the whole structure and keep it in place, the current trend is to insert cinderblocks inside the iron shell, absorbing most of the kinetic energy produced by the spool and its spin, which explains the machine’s weight. Until the Increvable comes in. Literarily translating as the Indestructible, the French inventor Julien Phedyaeff introduced to the APCI (Agency for the promotion of Industrial Creativity) recently. Like this: Like Loading...

Accordion Fold Skylights Tom Harris © Hedrich Blessing. Courtesy of Rebuild Foundation. One might think that an abandoned 1920s bank on Chicago’s South Side, crumbling from top to bottom—the roof long collapsed, exposing the interior to snow and rain for years—would be destined for a wrecking ball. Like so many other decaying structures in the area, that was certainly the fate of the Stony Island Savings & Loan building before artist, urban planner, and Chicago resident Theaster Gates intervened. Armed with only a vision to carry him through, Gates acquired the 20,000-square-foot bank for $1.00 from the city of Chicago and set about an unbelievable restoration. Steve Hall © Hedrich Blessing. The Stony Island Arts Bank is a place that proudly defies convention. The building’s first exhibition is by Portuguese artist Carlos Bunga, whose installation Under the Skin introduces towering cardboard columns to the bank’s towering first-floor gallery. You can visit the new arts bank Tuesday through Saturday, 11am-6pm.

Study: Metals Used in High-Tech Products Face Future Supply Risks The study — which was based on previous research, industry information, and expert interviews — represents the first peer-reviewed assessment of the criticality of all of the planet’s metals and metalloids. “The metals we’ve been using for a long time probably won’t present much of a challenge. We’ve been using them for a long time because they’re pretty abundant and they are generally widespread geographically,” Graedel said. “But some metals that have become deployed for technology only in the last 10 or 20 years are available almost entirely as byproducts. These findings illustrate the urgency for new product designs that make it easier to reclaim materials for re-use, Graedel said. The paper, published in the Proceedings of the National Academy of Sciences, encapsulates the Yale group’s five-year assessment of the criticality of the planet’s metal resources in the face of rising global demand and the increasing complexity of modern products.

Circuit board recycling GIF - HomemadeTools.net Administrator Join Date Jan 2012 Location Colorado, USA Posts 8,407 Thanks 1,470 Thanked 825 Times in 490 Posts Circuit board recycling GIF The Following 2 Users Say Thank You to Jon For This Useful Post: Moby Duck (Yesterday), Seedtick (Today) Thread Information Users Browsing this Thread There are currently 18 users browsing this thread. (0 members and 18 guests) Posting Permissions You may not post new threads You may not post replies You may not post attachments You may not edit your posts Forum Rules HomemadeTools.net Forum New Forum Posts I just checked Amazon and they have a sharpener that is specifically for FIGURE skates.

PRODUCTS | Pond | Biotech company pond produces bio resin systems which is at least 95 % biobased and fully degradable in nature. They are suitable to bind all natural fibers such as flax, hemp, pineapple, palm leaves, cotton, banana and jute resulting in making fully biodegradable products. In addition, it can also be applied to conventional fibers such as glass, carbon and kevlar. pond’s bio resin systems are mainly based on starch and designed to replace traditional oil based resins and plastics. The bio resins have comparable performance and processing conditions as epoxy resin. The final product then enters the full cycle of the “cradle to cradle” principle, which we here at pond are strong advocators for. The technical specifications will vary depending on which natural fiber you choose and not only on the specifications on the neat resin.

13 ways your solar installation can get more expensive - Solar Power Rocks Photo by cafecredit.com under CC2.0 From the homeowner’s perspective, installing solar is usually as easy as getting solar quotes, signing a contract, scheduling installation and flipping on the system. That’s because installers usually take care of everything else, from design to permitting and interconnection, all the way through to a years-long warranty agreement. Solar installers charge a price based on the peak capacity of your system, measured in watts. A typical solar system for your home will run you about $3.50 per watt of capacity, or about $17,500 for a typical 5-kilowatt system, before incentives like the federal solar tax credit or other incentives in your state. To make it confusing, every state has different solar policies and programs for home solar. Here are the 13 things you should be aware of which may inflate your cost of going solar: 1. If your roof is flat, you must build some scaffolding to tilt it up towards the sun. 2. 3. 4. The hits just keep on coming! 5. 6. 7.

Why Architects Must Rethink Carbon (It's Not the Enemy We Face) - Point of View - January 2017 Susan Szenasy William McDonough, 2016 Courtesy Marta Chierego – World Economic Forum Metropolis editor in chief Susan Szenasy sits down with William McDonough—the designer, author, and developer of Cradle to Cradle design—to understand why we must begin to employ a new language regarding carbon and sustainable design. Susan Szenasy: Your article in Nature, “Carbon is Not the Enemy,” really caught my attention. William McDonough: [With the UN’s Climate Change Conference in Paris in 2015,] everybody kept saying, "Oh, we have to do this, to reduce our carbon 20% by 2020." At this point in history, for most scientists, carbon in the atmosphere is a real problem. Carbon, an otherwise lovely material, could be a problem in the wrong dose, duration, and place. SS: How we should be thinking about carbon? WM: Let's think of carbon on its own terms. Then, if we look at carbon that is sitting still or being recycled across generations, we can call that durable carbon. Courtesy William McDonough

Ralph Knowles: Pioneer In Solar Design Daylight isn’t the first urban-planning consideration, but it is among the most important. This pioneer in solar design has worked for half a century to spread the message. Mimi Zeiger The architect and educator Ralph Knowles at home. Courtesy Brian Guido I meet architect and educator Ralph Knowles on an unseasonably warm autumn day, even for Southern California. Throughout the bruising 2016 election, climate change and the ecological impact of our insatiable demand for energy were the policy questions that were always on the sidelines and never explicitly addressed. The text of Energy and Form: An Ecological Approach to Urban Growth was part energy conservation treatise and part call to action. Read today, Energy and Form is a remarkably prescient predecessor to parametric analysis, which can approximate environmental impacts on building form in response to solar gain, shadow, or wind. Images courtesy Ralph Knowles Lately, people have been listening. Courtesy Charles Waldheim