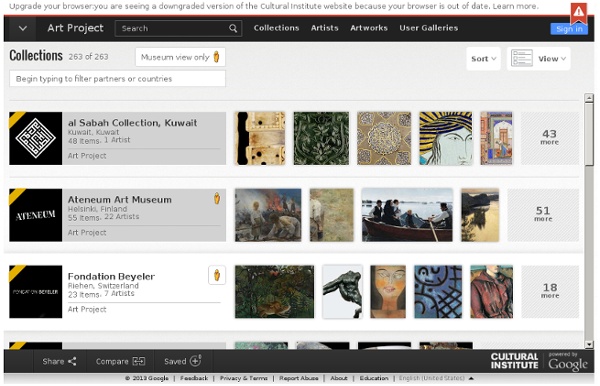 Extending the Museum Experience with Virtual Reality The author uses a Google Cardboard viewer. Photo: Angela Tornello The student’s view of the Guggenheim using Google’s Expeditions tablet app (showing a “point of interest” selected by the student’s teacher). Image: Courtesy Google Cultural Institute Impermanent Sand Paintings by Andres Amador San Francisco-area landscape artist Andreas Amador etches massive sand drawings onto beaches during full moons when his canvas reaches its largest potential. Using only a rake and often several helpers the geometric and organic shapes are slowly carved into the sand, often interacting with the physical topography like the stones in a zen garden. The works exist for only a few moments, just long enough to snap a few photographs before being completely engulfed by the encroaching tide.

10 facts you should know about Vincent van Gogh 10 facts (and a video) on the prolific genius who died a relatively unknown artist. 1. Vincent van Gogh was born on March 30, 1853, in Groot-Zundert, Netherlands. He was named after his grandfather and his stillborn brother who died one year before Van Gogh was born. ENDS OF THE EARTH: LAND ART TO 1974 Developed by MOCA for Ends of the Earth: Land Art to 1974, this interactive feature maps key artworks included in the exhibition, pinpointing their original locations to demonstrate the global nature of Land art and its relationship to real places and times. Click on an artist’s name to begin. Ends of the Earth: Land Art to 1974 is the first large-scale, historical-thematic exhibition to deal broadly with Land art, capturing the simultaneous impulse emergent in the 1960s to use the earth as an artistic medium and to locate works in remote sites far from familiar art contexts. Organized by MOCA Senior Curator Philipp Kaiser and co-curator Miwon Kwon, Professor of Art History at UCLA, the exhibition highlights the early years of untested artistic experimentations and concludes in the mid-1970s before Land art becomes a fully institutionalized category. Major support is provided by Barbara Kruger and L&M Arts, LA. The exhibition is also made possible by Kathi and Gary Cypres.

christo's big air package opens in germany mar 19, 2013 christo's big air package opens in germany ‘big air package’ by christo and jeanne-claude, germanyimage © wolfgang volzall images courtesy of christo and jeanne claude big air packagegasometer oberhausen, germanyon view now through 30 december 2013 CDOT: Christo's Over the River will get serious traffic review Posted: 06/21/2012 12:57:05 PM MDT This artist's drawing provided by Christo shows an image of a proposed art project by artists Christo and Jeanne-Claude that would suspend 5.9 miles of silvery, translucent fabric above parts of the Arkansas River in southern Colorado. (Provided by Christo | via AP) Christo's Over The River project, which calls for draping huge fabric panels from cables over parts of the Arkansas River, will be carefully scrutinized for its potential impact on traffic on U.S. 50 — just like any other huge project, Colorado Department of Transportation officials said today. The $50 million art installation is being attacked by a group from Cañon City as being dangerous, especially to anyone living near the headwaters of the Arkansas River and in Bighorn Sheep Canyon.

Free Art Teaching Resources This page contains some useful resources and links to help teachers in their art teaching. You will basically be directed to websites where you can find art materials, videos, printables, worksheets, activities, games, and many other teaching ideas that are art informed. 1- Songs for Teaching Creative teachers can use music to teach content across the curriculum – to students of all ages. Egyptian Desert Sand Spiral In the eastern Sahara desert bordering the Red Sea stands Desert Breath, a stunning land-art project comprised of perfectly-formed cones and a glistening pool of water. Nestled between the hills on the Egyptian desert floor, this site-specific installation was the work of D.A.ST. Arteam, made up of Danae Stratou (installation artist), Alexandra Stratou (industrial designer and architect), and Stella Constantindies (architect). They spent from 1995 to 1997 working on Desert Breath, relocating 8,000 square meters of sand to create what we see here.

A Home For Media Artists Zhou Fan by okmarzo November 30, 2016 Rotating Snake Illusion Back­ground – In the image above the strong (and beau­ti­ful) ro­ta­tion of the “wheels” oc­curs in re­la­tion to eye move­ments. On steady fix­a­tion the ef­fect van­ishes. For an ex­plana­tory hy­poth­e­sis, view the an­i­ma­tion on the right. You ma y wish to press the ‘Stop’ but­ton after a while … it gets on one’s nerves ;-). See also Backus & Oruc 2004 for their ex­pla­na­tion.