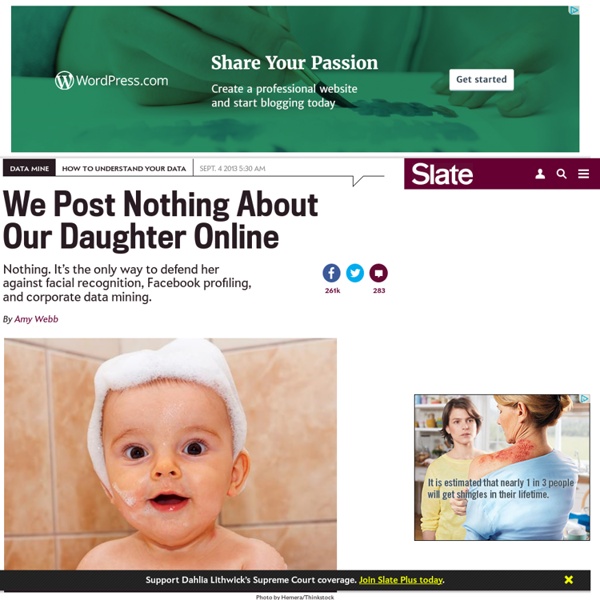 Photo by Hemera/Thinkstock I vividly remember the Facebook post. It was my friend’s 5-year-old daughter “Kate,” (a pseudonym) standing outside of her house in a bright yellow bikini, the street address clearly visible behind her on the front door. A caption read “Leaving for our annual Labor Day weekend at the beach,” and beneath it were more than 50 likes and comments from friends—including many “friends” that Kate’s mom barely knew. The picture had been uploaded to a Facebook album, and there were 114 shots just of Kate: freshly cleaned and swaddled on the day of her birth … giving her Labradoodle a kiss … playing on a swing set. I completely understood her parents’ desire to capture Kate’s everyday moments, because early childhood is so ephemeral. Last week, Facebook updated its privacy policy again. Six thousand respondents to Slate’s survey show a clear trend. The problem is that Facebook is only one site. That poses some obvious challenges for Kate’s future self. Related:  Online Privacy • You may be in Danger

How to foil NSA sabotage: use a dead man's switch | Technology The more we learn about the breadth and depth of the NSA and GCHQ's programmes of spying on the general public, the more alarming it all becomes. The most recent stories about the deliberate sabotage of security technology are the full stop at the end of a sentence that started on 8 August, when the founder of Lavabit (the privacy oriented email provider used by whistleblower Edward Snowden) abruptly shut down, with its founder, Ladar Levison, obliquely implying that he'd been ordered to secretly subvert his own system to compromise his users' privacy. It doesn't really matter if you trust the "good" spies of America and the UK not to abuse their powers (though even the NSA now admits to routine abuse), you should still be wary of deliberately weakened security. It is laughable to suppose that the back doors that the NSA has secretly inserted into common technologies will only be exploited by the NSA. One important check against the NSA's war on security is transparency.

CA School District Announces It's Doing Round-The-Clock Monitoring Of Its 13,000 Students' Social Media Activities The Glendale School District in California is facing some backlash from the recent news that it has retained the services of Geo Listening to track its students' social media activity. The rationale behind the program is (of course) the students' safety. After collecting information from students' posts on social media platforms such as Facebook, Instagram, YouTube and Twitter, Geo Listening will provide Glendale school officials with a daily report that categorizes posts by their frequency and how they relate to cyber-bullying, harm, hate, despair, substance abuse, vandalism and truancy.Glendale Unified, which piloted the service at Hoover, Glendale and Crescenta Valley high schools last year, will pay the company $40,500 to monitor posts made by about 13,000 middle school and high school students at eight Glendale schools. Glendale Unified Supt. The FactsYour students are crying for help. This seems to be true, but not necessarily because Geo Listening is concerned about privacy.

The Internet in Real-Time Climate change a clear threat U.S. President Donald Trump arrives for a working session with outreach countries and international organizations, at the G7 Summit, Saturday, May 27, 2017, in Taormina, Italy. AP Photo/Evan Vucci, Pool President Donald Trump's bombshell announcement that he was pulling the US out of the Paris Agreement was widely panned by environmental activists and scientists, as well as major business leaders such as Tesla CEO Elon Musk and billionaire entrepreneur Mark Cuban. But Trump's decision has also invited scrutiny from military and intelligence experts who believe a US withdrawal from the pact poses a unique threat to national security and the global order. The primary link between climate change and national security is instability, according to James Clapper, the former Director of National Intelligence. Climate change, which Clapper said significantly contributes to instability, can have a devastating impact on the availability of critical resources such as water, food, and energy.

A Guide to What We Now Know About the NSA's Dragnet Searches of Your Communications Charlie Savage of The New York Times confirmed this week what we have been warning about for years, including to the Supreme Court last fall: The National Security Agency (NSA) is "searching the contents of vast amounts of Americans' e-mail and text communications into and out of the country, hunting for people who mention information about foreigners under surveillance . . . ." The rub: If you've sent an international email or text since 2008, chances are the government has looked inside of it. In other words, the same NSA surveillance dragnet that government officials have consistently dismissed as speculative and far-fetched is very, very real. These reports are particularly alarming in light of government officials' emphatic public statements denying that the NSA ever peeks inside the contents of Americans' communications without a warrant. We've explained why those disavowals have been misleading; now, we know they're simply untrue. Prism or Upstream (or both)?

Mailpile: Let’s take email back! Ring Could Log Users In to Houses, Phones and Website as Soon as Next Month The need for more passwords that our feeble human brains struggle to remember can make it feel like we work for the machines instead of the other way around. Wearable, and even embeddable, login storage has emerged has a possible solution. After Google researchers floated the idea of a USB stick or a ring that would generate login keys, it appeared the Web giant would lead the way. But a UK project recently closed a $380,000 Kickstarter campaign, promising delivery of 61,000 password-bearing rings in September. The company, NFC Ring, makes a simple silver ring with two near-field communication transmitters inside it, storing access information that can potentially be used to unlock phones, cars or houses or even to log in to websites. One transmitter faces out and stores information that the user may want to share, such as his or her contact information. Users won’t have to charge or update the rings because the transmitters are passive. Images courtesy NFC Ring

The Airport Lawyers Who Stood Up to Trump Are Under Attack The Airport Lawyers Who Stood Up to [...] Demonstrators pass a volunteer immigration attorney as they march in support of a ruling by a federal judge in Seattle that grants a nationwide temporary restraining order against the presidential order to ban travel to the United States from seven Muslim-majority countries, at Tom Bradley International Terminal at Los Angeles International Airport on Feb. 4, 2017. (Photo by David McNew/Getty Images) This post originally appeared at The Nation. While the country has been fixated on President Trump’s firings, leaks and outbursts involving the Department of Justice, that agency has itself been stealthily attacking our democracy by telling good lawyers to stop representing people. Last week, NWIRP filed a lawsuit to defend itself against the DoJ’s order—and on Wednesday, a judge granted a restraining order. Before I explain more, let’s step back for the context: You have no right to counsel in immigration proceedings.

5 ways to easily increase your internet security - Seattle Political Buzz In this age of technology nothing is private. In fact, NSA whistleblower William Binney recently stated that literally every email sent in the US is recorded by the FBI. For those living in reality, it has been know that since the 90's under President Clinton, programs such as Echelon monitored nearly every phone call, fax, and email in the United States. Sites like Facebook have been known to record users web history even when they are logged out. Good Internet security is not about "having something to hide." Use Startpage! Most people are familiar with cookies, small pieces of data sent from a website and stored in a user's web browser while a user is browsing a website. Two preferable browsers for everyday use would be Mozilla Firefox and Opera. Encourage you friends to add Cryptocat to their browser. PeerBlock lets you control who your computer "talks to" on the Internet. For more advanced and secure systems make sure to check out The Tor Project.

Related:
Related:  Online Privacy   -  You may be in Danger