Why Are Millions Of Fish Suddenly Dying In Mass Death Events All Over The Planet? 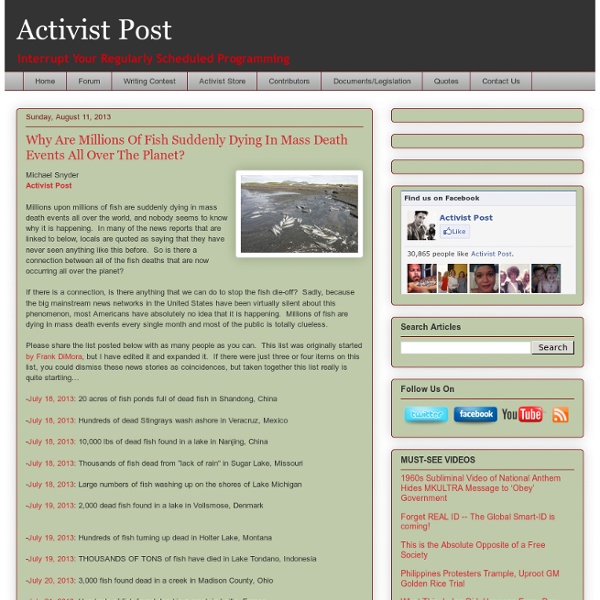 Michael SnyderActivist Post Millions upon millions of fish are suddenly dying in mass death events all over the world, and nobody seems to know why it is happening. In many of the news reports that are linked to below, locals are quoted as saying that they have never seen anything like this before. So is there a connection between all of the fish deaths that are now occurring all over the planet? If there is a connection, is there anything that we can do to stop the fish die-off? Please share the list posted below with as many people as you can. -July 18, 2013: 20 acres of fish ponds full of dead fish in Shandong, China -July 18, 2013: Hundreds of dead Stingrays wash ashore in Veracruz, Mexico -July 18, 2013: 10,000 lbs of dead fish found in a lake in Nanjing, China -July 18, 2013: Thousands of fish dead from “lack of rain” in Sugar Lake, Missouri -July 18, 2013: Large numbers of fish washing up on the shores of Lake Michigan -July 22, 2013: Large fish kill at Grand Lake in St. Related:  Environment and Climate Change

EU beefs up electronic waste recycling | Environment The European Parliament has been criticised for waving through revised rules on the disposal of electronic equipment without including any provision to promote the reuse of old equipment. As a result of last week's vote, member states will have to increase their collection of e-waste beyond the current flat-rate target of 4kg per person per year, so that by 2016 they will instead have to collect 45 tonnes for every 100 tonnes of electronic goods put on sale three years previously. By 2019, this target will rise to a collection rate of 65 per cent of sales from three years previous, although countries have the alternative of collecting a comparable figure of 85 per cent of all e-waste generated. In a statement, the parliament said better processing of e-waste would not only reduce the amount of potentially toxic waste sent to landfill or illegally exported overseas, but lead to greater recovery of valuable raw materials.

Cleaning, Disinfection, and Sterilization of medical instruments and supplies in survival situations In survival situations, medical emergencies will arise. One of the main concerns with any medical procedures is clean, sterilized equipment so as to not pass on infection and compound or completely compromise any medical procedures that must be done.. Here is a basic primer on disinfection and sterilization in survival situations Q. What is the difference between disinfection and sterilization? A. Sterility is only a temporary state – once sterile packaging is open or the product has been removed from an autoclave colonization begins almost immediately just from exposure to air and bacteria present in the environment. Q. A. Infection rates are no greater if a superficial wound has been irrigated and cleaned with tap water vs. being cleaned and irrigated with sterile saline. Expendable vs. Expendable supplies are used once and discarded. Sterilisation of specific items: Syringes: There are two types of syringes: disposable and reusable. Sharpening permanent needles: Surgical instruments:

A Republican Case for Climate Action There is no longer any credible scientific debate about the basic facts: our world continues to warm, with the last decade the hottest in modern records, and the deep ocean warming faster than the earth’s atmosphere. Sea level is rising. Arctic Sea ice is melting years faster than projected. The costs of inaction are undeniable. The lines of scientific evidence grow only stronger and more numerous. A market-based approach, like a carbon tax, would be the best path to reducing greenhouse-gas emissions, but that is unachievable in the current political gridlock in Washington. The president also plans to use his regulatory power to limit the powerful warming chemicals known as hydrofluorocarbons and encourage the United States to join with other nations to amend the Montreal Protocol to phase out these chemicals. As administrators of the E.P.A under Presidents Richard M. The solutions we supported worked, although more must be done. We can have both a strong economy and a livable climate.

'They're killing us': world's most endangered tribe cries for help | World news | The Observer Loggers strip trees from Amazonian tribe's territory Link to video: Loggers strip trees from Amazonian tribe's territory Trundling along the dirt roads of the Amazon, the giant logging lorry dwarfed the vehicle of the investigators following it. The trunks of nine huge trees were piled high on the back – incontrovertible proof of the continuing destruction of the world's greatest rainforest and its most endangered tribe, the Awá. Yet as they travelled through the jungle early this year, the small team from Funai – Brazil's National Indian Foundation – did not dare try to stop the loggers; the vehicle was too large and the loggers were almost certainly armed. All they could do was video the lorry and add the film to the growing mountain of evidence showing how the Awá – with only 355 surviving members, more than 100 of whom have had no contact with the outside world – are teetering on the edge of extinction. The Awá are one of only two nomadic hunter-gathering tribes left in the Amazon.

Jon Rappoport's Blog China admits to existence of 'cancer villages' sprouting up due to extreme pollution, chemical exposure (NaturalNews) On the heels of my own publication of articles questioning the integrity of "certified organic" when it comes to foods and superfoods produced in mainland China, a blockbuster report from China's own environmental ministry slams another exclamation mark on the severity of the problem. For the first time in history, the Chinese government is now openly admitting that severe exposure to chemicals via water pollution, air pollution and environmental pollution is causing the rise of "cancer villages" across China. Their report states: Poisonous and harmful chemical materials have brought about many water and atmosphere emergencies... certain places are even seeing 'cancer villages'... It goes on to admit: [China allows the use of] poisonous and harmful chemical products that are banned in developed countries and pose long-term or potential harm to human health and the ecology. Pollution? In reality, China has the worst pollution problems of any modern nation on our planet.

Pandemic Watch: Another insider announces that a global pandemic is imminent Janet C. Phelan Dr. J. Joseph Kim, founder and director of Inovio Pharmaceuticals, has recently declared that a global pandemic is “inevitable” in the next couple of years. Quoted in an article in US News onDecember 24, Dr. Through his declaration of the imminent nature of a pandemic, Kim adds his name to a growing list of insiders who are stating that we are shortly facing a disease event of a global magnitude. At the very time that our attention is focused on the possibility of losing our rights to defend ourselves via our potential loss of our second amendment rights, the insidious possibility of a global pandemic is lurking....well, right under our pavement. The possibility for utilization of the water system as a delivery system for a pandemic-type agent remains salient. Truthfully, I prefer the word “genocide” to “population reduction.” Dr. Merck has been under scrutiny for a number of years for problems with its products, including drugs such as Temodar, PegIntron, and Intron A.

CIA Backs $630,000 Scientific Study on Controlling Global Climate By Dana Liebelson and Chris Mooney, MotherJones.com The Central Intelligence Agency is funding a scientific study that will investigate whether humans could use geoengineering to alter Earth's environment and stop climate change. The National Academy of Sciences (NAS) will run the 21-month project, which is the first NAS geoengineering study financially supported by an intelligence agency. With the spooks' money, scientists will study how humans might influence weather patterns, assess the potential dangers of messing with the climate, and investigate possible national security implications of geoengineering attempts. The total cost of the project is $630,000, which NAS is splitting with the CIA, the National Oceanic and Atmospheric Administration, and NASA. The NAS website says that "the US intelligence community" is funding the project, and William Kearney, a spokesman for NAS, told Mother Jones that phrase refers to the CIA.