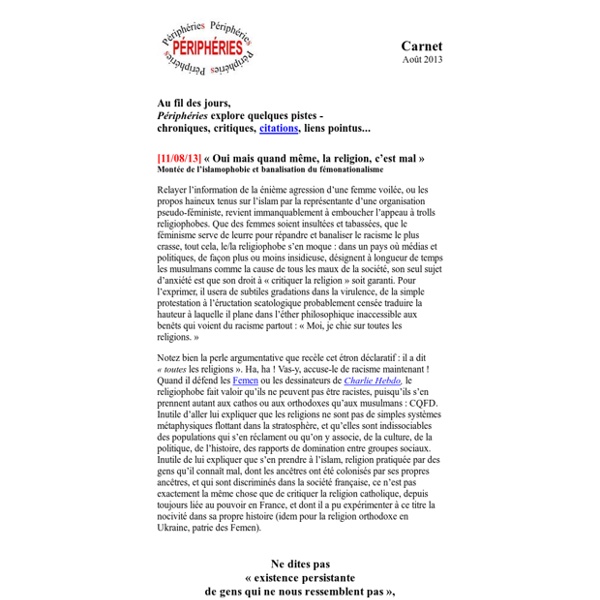 Listen up, women are telling their story now I have been waiting all my life for what 2014 has brought. It has been a year of feminist insurrection against male violence: a year of mounting refusal to be silent, refusal to let our lives and torments be erased or dismissed. It has not been a harmonious time, but harmony is often purchased by suppressing those with something to say. The Invention of the Jewish Nose by Sara Lipton In 1940 the Nazis released a propaganda film called The Eternal Jew. The film claimed to show the Jews in their “original state,” “before they put on the mask of civilized Europeans.” Stagings of Jewish rituals were interspersed with scenes of yarmulke- and caftan-wearing Jews shuffling down crowded alleys, all meant to show the benighted nature of Jewish life.

Coming Out as Biracial — Human Parts A few months ago, I not-so-subtly asserted myself as biracial while having dinner with a new coworker. “I’m a Capricorn,” she’d said. “Yeah…my mom’s black,” I responded (not verbatim, but the exchange was similar). Whoa. Growing Out My Bush Day 180 - From Bare to Bush It’s been 180 days since the inception of this (almost accidental) project. True, I meant to start a blog that documented my pubic hair regrowth, but I never in a million years envisioned that it would become such a renown and adored fixture within Tumblr society. I never thought I’d create a post that received over 100 thousand notes on it on this platform alone and has appeared within countless other venues on the internet. I never thought I’d receive so many messages that my fingers started to burn after hours of responding.

Black culture isn't the problem - systemic inequality is The idea that it is black folks and our supposedly immoral and savage culture that creates our disproportionate rates of poverty and imprisonment is everywhere: cop shows, news media, movies set in black neighborhoods and high-school social studies classes have all perpetuated this misconception. And some are now using this old, false idea to disparage Black Lives Matter, saying that the real problem facing black communities isn’t police violence, racist oppression or economic exploitation but “black-on-black crime”. We hear this all over the place, from news columnists to Ray Lewis to Rudy Giuliani – and, most recently, reiterated by Bill Clinton. It’s asinine, this argument that modern civil rights movements like Black Lives Matter should stop talking about actual problems in favor of apocryphal ones. During the civil rights movement there was much more homicide in the black community than there is now — black-on-black crime is shrinking.

20 Photos That Change The Holocaust Narrative Victims. Helpless. Downtrodden. That’s the narrative that’s been spread about Jews for the last 70 years since the Holocaust. We’ve embraced it to our detriment. We can’t seem to address antisemitism without running to the world and screaming that we’re being persecuted, rather than standing up strongly in defiance, aware of our own inner strength. The Colourblind Doctrine – Media Diversified by Cristine Edusi A new ideology has reared its head in our “post racial” century and we have labelled it colour blind. The doctrine rests on the idea that we no longer see colour, just people. The black radical tradition This same reader is available in a cleaner format here: It is a part of the Communist Interventions Series, edited by the Communist Research Cluster. Black Reconstruction - W.E.B. Du Bois What Socialism Means to Us - Hubert Harrison An Appeal to the Conscience of the Black Race to See Itself - Marcus Garvey Program of the African Blood Brotherhood - The African Blood Brotherhood Report on the Negro Question - Claude McKay Application for Membership in the Communist Party - W.E.B. Du Bois The Negro Nation - Harry Haywood An End to the Neglect of the Problems of the Negro Woman!