Neuroacoustics: The Healing Power of Sound 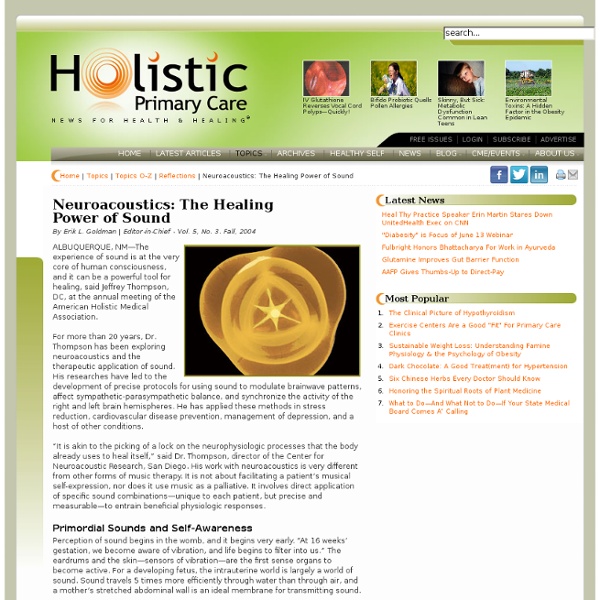 ALBUQUERQUE, NM—The experience of sound is at the very core of human consciousness, and it can be a powerful tool for healing, said Jeffrey Thompson, DC, at the annual meeting of the American Holistic Medical Association. For more than 20 years, Dr. Thompson has been exploring neuroacoustics and the therapeutic application of sound. His researches have led to the development of precise protocols for using sound to modulate brainwave patterns, affect sympathetic-parasympathetic balance, and synchronize the activity of the right and left brain hemispheres. “It is akin to the picking of a lock on the neurophysiologic processes that the body already uses to heal itself,” said Dr. Primordial Sounds and Self-Awareness Perception of sound begins in the womb, and it begins very early. In many respects, it is through sound that a gestating human becomes aware of itself. Physical Resonance Much of Dr. Almost everyone has seen images of a wine glass being exploded by sound. Dr. In 1973, Dr. Dr. Related:  Frequency, Light, Energy & Sound • Neuroscience

Transform your life in 10 minutes with ancient 'youthing' practice (NaturalNews) If you need more zest and zip in your life, the secret to these states and more can be found in a set of simple (yet profound) yogic exercises known as the "Five Tibetans." Developed by Buddhist monks and brought to the West in the 1930s, Tibetan yoga is a series of five movements that improve digestion and circulation while dispelling fatigue and depression. Advocates of the practice rave about the boundless energy, clarity and vitality the short daily sessions produce. And many also believe Tibetan yoga reverses the hands of time, promoting an ageless and disease free body.Yoga in general has long been associated with reduced tension, stress and anxiety in those who regularly practice. A study in the Scandinavian Journal of Work, Environment and Health found that a single 60-minute session of yoga once per week improved feelings of clarity, energy, confidence and resistance to workplace stress after six weeks of participation. - Effortless weight loss Sources:

Serotonin And Happiness Are Regulated By Gut Bacteria - BMED Report University of College Cork (UCC) scientists have shown that brain levels of serotonin, the ‘happy hormone,’ are regulated by the amount of bacteria in the gut during early life. Their research is being published today in the leading international psychiatry journal, Molecular Psychiatry. This research shows that normal adult brain function depends on the presence of gut microbes during development. Serotonin, the major chemical involved in the regulation of mood and emotion, is altered in times of stress, anxiety and depression and most clinically effective antidepressant drugs work by targeting this neurochemical. Scientists at the Alimentary Pharmabiotic Centre in UCC used a germ-free mouse model to show that the absence of bacteria during early life significantly affected serotonin concentrations in the brain in adulthood. “We’re really excited by these findings” said lead author Dr. Material adapted from University of College Cork.

Synesthesia Synesthesia is a perceptual condition in which information between the senses is blended. Our laboratory is working to understand synesthesia from three angles. First, we have collected and rigorously verified over 20,000 synesthetes (Novich, Cheng, Eagleman, 2011). To speed and standardize the study of synesthesia, we have developed a standardized battery for testing and quantifying the phenomenon at synesthete.org. For an overview and framework of the field, please see my book on synesthesia: Wednesday is Indigo Blue: Discovering the Brain of Synesthesia (MIT Press, co-authored with Richard Cytowic). Here's what Oliver Sacks writes about the book:"Twenty years ago, synesthesia - the automatic conjoining of two or more senses - was regarded by scientists (if at all) as a rare curiosity. For a quick description of synesthesia, watch lab grad student Steffie Tomson explain--as seen on Nova ScienceNOW For some of our papers on synesthesia, see:

FAQs How Energy and Frequencies Affect Your Hydration and Health| Hydra Blue Q: What is energy? Energy is defined as the ability to do work; or the potential of motion or power. It is the fundamental substance in the universe and has many different forms, including chemical, electric, magnetic, thermal (heat), radiant (electromagnetic), mechanical, sound and nuclear energy. Q: What is “electromagnetic energy”? Electromagnetic (EM) energy is the most common and useful form of energy. Q: What is EM energy made of? EM energy is made of two things: waves and particles. Q: What are "frequencies"? Frequencies are a measurement of how frequently a wave of electromagnetic energy rises and falls in one second (hertz). Q: What does "hertz" mean? The term "hertz" is a measurement of the number of complete electromagnetic waves (cycles) that occur during a period of one second (hertz = cycles per second). Q: How are EM frequencies used in electronics? All types of electronic equipment use EM energy. Q: How are EM frequencies used in the body? Q: What does "full-spectrum" mean?

Synesthesia How someone with synesthesia might perceive (not "see") certain letters and numbers. Synesthetes see characters just as others do (in whichever color actually displayed), yet simultaneously perceive colors as associated to each one. Synesthesia (also spelled synæsthesia or synaesthesia; from the Ancient Greek σύν syn, "together", and αἴσθησις aisthēsis, "sensation") is a neurological phenomenon in which stimulation of one sensory or cognitive pathway leads to automatic, involuntary experiences in a second sensory or cognitive pathway.[1][2][3][4] People who report such experiences are known as synesthetes. Difficulties have been recognized in adequately defining synesthesia:[5][6] many different phenomena have been included in the term synesthesia ("union of the senses"), and in many cases the terminology seems to be inaccurate. Only a fraction of types of synesthesia have been evaluated by scientific research.[11] Awareness of synesthetic perceptions varies from person to person.[12]

Positive and Negative Frequencies and their effect on ourselves and the world around us More and more information and studies are popping up around the world on this topic- yet you will not find the main stream media reporting so much as a whisper. Why is that? Is it because what we are learning about our DNA and about how quantum mechanics works- tying us all together into one active and reactive entity- might just scare the snot out of our controllers? This ARTICLE is a great jumping off point on this topic. The article delves into the effects of sound and light on physical structure, including information from the early 1800s that made the realization that sound can effect physical matter. If sound and light can effect physical reality, then ask yourself: how is this effecting me? This is an area that concerns me greatly. Japanese scientist Dr. ... I do not believe that simple words written on paper have any power over the water crystals, BUT... the thoughts behind those words create emotional responses. By Grazyna Fosar and Franz Bludorf