Loneliness Illustrated So Beautifully You Will Need To Tell Someone 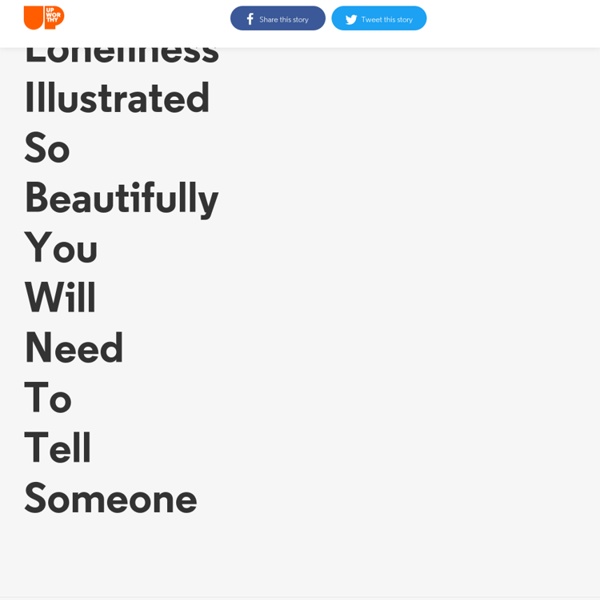 These Are Photos Of Children's Bedrooms. But They Represent Something Much, Much More. Millions of people from around the world are currently experiencing very different childhoods. Some are living in abject poverty, lacking basic food and sanitation, while others are more fortunate by being born in a country where those things are guaranteed and usually taken for granted. When photographer James Mollison was asked to come up with an idea for engaging with children’s rights, he found himself thinking of his bedroom: how significant it was during his childhood, and how it reflected what he had and who he was. And with that, he made it his mission to create Where Children Sleep – a collection of stories about children from around the world, told through portraits and pictures of their bedrooms. Bilal, 6, Wadi Abu Hindi, The West Bank

Education is Ignorance, by Noam Chomsky (Excerpted from Class Warfare) DAVID BARSAMIAN: One of the heroes of the current right-wing revival... is Adam Smith. You've done some pretty impressive research on Smith that has excavated... a lot of information that's not coming out. You've often quoted him describing the "vile maxim of the masters of mankind: all for ourselves and nothing for other people." 10 Things Extraordinary Bosses Give Employees Good bosses have strong organizational skills. Good bosses have solid decision-making skills. Good bosses get important things done. Exceptional bosses do all of the above--and more. Sure, they care about their company and customers, their vendors and suppliers.

What my sons can learn from Mick Fanning - Mouths of Mums With the images of Mick Fanning’s terrifying shark attack fresh in the world’s eyes, no one can deny the sheer horror of what we witnessed and what will be hard to forget. As his manager, Ronnie Blakey said, “I was thinking we’re watching a three-time world champion die. That was the reality of the situation,” he said. “At worst I thought if he isn’t dead maybe he’s lost a limb.” Few of us will ever unsee that footage, nor unhear the screams from the crowds of the beaches, and the frantic voice of the commentator desperate to get help to the two men in the water. But in the aftermath of this terrifying ordeal, shaken, the world watched as this brave man graciously and quietly acknowledged his horror.

Why Americans doubt man-made climate change - Inside Story: US 2012 It was 42 years ago that the first Earth Day was organised in the US, drawing millions of Americans to rallies across the country calling for a sustainable environment. Some consider that day to be the birth of the modern environmentalist movement in the US. Today the day is marked by millions around the world but its impact in the US seems to have fizzled, with only dozens turning out at the National Mall in Washington DC on Sunday. 5 Best Places To Find A Mentor You've heard the reasons why you need a mentor, and you're ready, but how do you find one that works for you? Start by looking in these 5 places. August 28, 2013 Mentors are indispensable when you're launching your career or learning the ropes in a new industry.

Women’s rights in Australia: Some teenagers have shocking attitudes Warped ... Alarming new figured have revealed teenagers’ attitudes to sex and relationships. We should be worried about our teenagers. The scary facts are that one in six 12-24 year olds think “women should know their place”, and one in three think that ‘exerting control over someone isn’t a form of violence’. These are some of the findings from a survey of over 3000 young men and women, which also found that more than a quarter of young people think “male verbal harassment” and “pressure for sex” toward females are “normal” practices. When I was growing up, any conversation around sex and relationships with an adult made my skin crawl; awkwardness only begins to describe it, but I’m glad someone took the time to have them with me because they taught me that healthy relationships are based on respect.

How to Know If You're Working (and Living) With Purpose "If you deliberately plan on being less than you are capable of being, then I warn you that you'll be unhappy for the rest of your life." --Abraham Maslow Living with purpose is one of the most self-actualized activities we can participate in. Why Teenagers Hit Puberty and Take Dumb Risks - The Atlantic Why do teenagers do so many stupid things when other teens are around? This week, I’m sharing a variety of responses to the question, “What insight or idea has thrilled or excited you?” Professor Laurence Steinberg, an expert on the adolescent brain, teen risk-taking, and psychological development, recalls two times when research findings particularly excited him. The first happened early in his career: