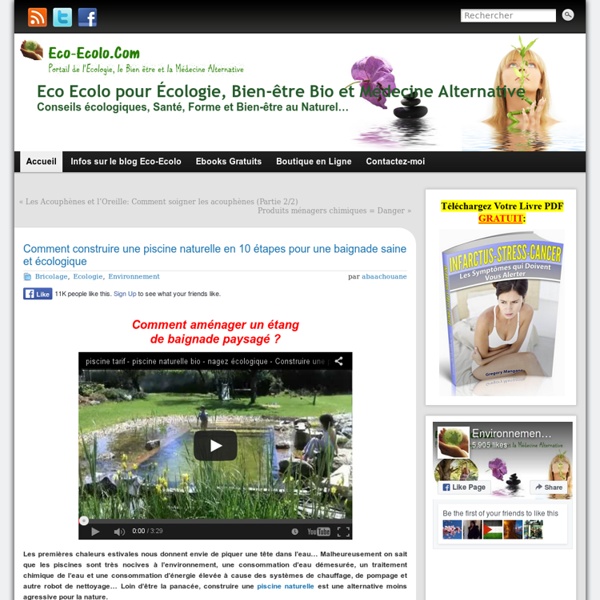 10 Chinese Herbs to Cure What Ails You Older 10 Chinese Herbs to Cure What Ails You by Michelle Slatalla Issue 4 · Chinese New Year · January 27, 2014 Newer Issue 4 · Chinese New Year · January 27, 2014 Share on email DIY Bathtub Greywater System Greywater is a fabulous, though often underused, household resource that should be used wherever possible. Here’s a home made three bathtub greywater system that’s simple but effective. If you live in an area where water is precious at certain times of year (and when is it not?) then catching, storing and using every drop you can to create a more liveable home and surrounds is an excellent idea. At Melliodora in Victoria, the studio cottage does its best to do just that, by catching, filtering and re-assigning the greywater to useful purposes in the garden.

Try these four incredible natural treatments for chronic inflammation (NaturalNews) The more progressive side of modern medicine is quickly learning that the root cause of many contemporary illnesses is none other than chronic inflammation, a lingering immune response caused by poor diet and other factors that, if left unchecked, can damage a number of important systems throughout the body. Your endocrine (hormone), central, immune, digestive, cardiovascular, and respiratory systems, to name the most common, are all threatened by chronic inflammation, which ultimately has the potential to manifest itself as literally hundreds of different diseases. "Researchers are linking inflammation to an ever-wider array of chronic illnesses," wrote Newsweek reporter Anne Underwood in a 2005 piece on the growing inflammation-disease link.

18 of Nature’s Most Powerful Medicinal Plants (Part of an Exclusive WebEcoist Series on Amazing Trees, Plants, Forests and Flowers) From marijuana to catnip, there are hundreds of remarkably common herbs, flowers, berries and plants that serve all kinds of important medicinal and health purposes that might surprise you: anti-inflammatory, anti-fungal, insect repellent, antiseptic, expectorant, antibacterial, detoxification, fever reduction, antihistamine and pain relief. Here are eighteen potent medical plants you're likely to find in the wild – or even someone's backyard – that can help with minor injuries, scrapes, bites and pains.* Marijuana

Top 15 Anti-Inflammatory Herbs To Alleviate Aches and Pain For Good Carly Fraser, Live Love FruitWaking Times If you’re currently taking drugs for your inflammation, then you need to read this article. First things first – chronic inflammation doesn’t need to be your enemy. That is, as long as you know how to properly deal with it. Chronic inflammation is the root cause of almost every disease and illness known to man. This includes (but is not limited to) arthritis, irritable bowel syndrome, Chron’s disease, ulcerative colitis, autoimmune disease, asthma, acne, diabetes, cancer, heart disease, osteoarthritis, rheumatoid arthritis and Alzheimer’s disease.

Herbal Remedies" While some people may dismiss herbal remedies as quackery, the use of botanicals is well rooted in medical practice. Ancient doctors methodically collected information about herbs and developed well-defined pharmacopoeias to treat a variety of ailments. More than a quarter of all drugs used today contain active ingredients derived from those same ancient plants. It's estimated that nearly 80 percent of the world's population use herbs for some aspect of primary health care. In the United States, more than 1,500 botanicals are sold as dietary supplements; top-selling herbs include echinacea, garlic, goldenseal, ginseng, ginkgo, saw palmetto, aloe, ephedra, Siberian ginseng, and cranberry. Clinical studies on a handful of herbs are underway, but to help you understand the benefits and risks, we've compiled a comprehensive guide to herbs, including potential uses, side effects, and precautions.

Herbal Antibiotics Herbal antibiotics have long been used by herbal healers to ward off colds and flu, clear infections and speed wound healing. Now, they may be moving back into the mainstream as an alternative for bacteria that have become resistant to synthetic antibiotics. This post is based on the book “Herbal Antibiotics” by Stephen Harrod Buhner, and related materials. We’ll start with some background information and then discuss antibiotic herbs and their use.

Meet The World's Largest Living Organism When you think of the biggest organisms on Earth, the blue whale probably springs to mind first. After all, these gargantuan beasts are up to 30 meters long (100 feet) and can weigh upward of 180 tons, meaning they’re probably bigger than even the largest dinosaurs. But it turns out that the world record holder for the largest living organism on Earth is something much less impressive to look at, but size wise it makes even the mighty blue whale seem puny; it’s a fungus. More specifically, the contender for the world’s largest known organism is a honey fungus living in the Blue Mountains of Oregon. This humongous fungus occupies almost 2,400 acres (965 hectares) of soil, covering an area as big as 1,665 football fields. Honey fungus, or honey mushroom, is actually the common name given to several different species of fungi in the genus Armillaria.