101 Everyday Ways for Men to Be Allies to Women 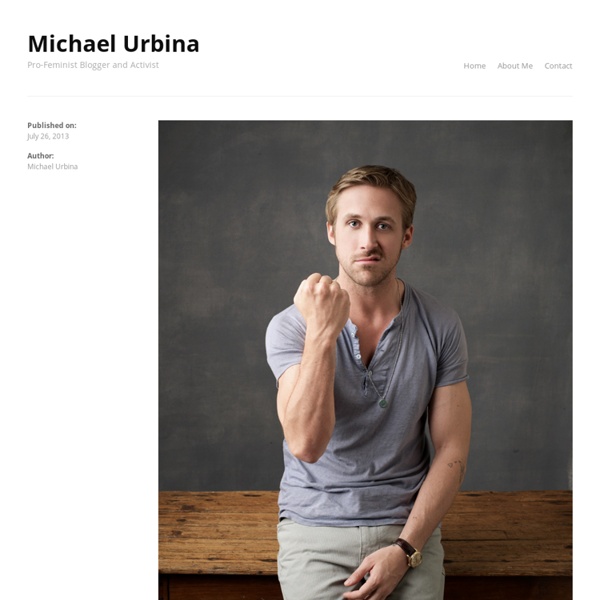 I’ve considered myself a feminist and male ally to women for quite some time. When I took my first Women’s Studies class two years ago with Professor Denise Witzig, little did I know that it would take me down an unsuspecting, beautiful, and transformative path towards feminism. Below, I’ve complied a list of 101 everyday ways for men to be allies to women. I must acknowledge that this post was written with cisgender, heterosexual men as a possible, target audience due to the lack of support from this group. However, I feel that many of these points are applicable on a broader scale. If you have suggestions or additions to this list, I’ve included my email at the end of this post. 1. I’m very intentional in making this point first. 2. In order to be a successful ally, you must make a daily effort to understand privilege. 3. Allies are not perfect by any means. 4. If you’re serious about being an ally, I think this point is somewhat obvious. 5. 6. 7. 8. 9. 10. 11. 12. 13. 14. 15. 16.

Related:  Gender • Other Side of the Sky

6 Easy Ways to Make Me, a Transgender Person, Extremely Uncomfortable Nine times out of 10, when cisgender people ask me about my experiences as a queer, non-binary trans guy, they aren’t actually intending to make me uncomfortable. And yet, it happens. It happens a lot. And these situations can often cause harm to trans people who are trying to live their lives without being subjected to microaggressions like these. Whatever the intention, the result is that someone gets hurt. Which is why I think talking about it is a valuable thing — the more open and honest we can be, the more we can learn and grow, right?

'I am a Feminist': New generation steps up to claim the 'F-word' mross@bayareanewsgroup.com These days, UC Berkeley senior Megan Riggio is proud to call herself a feminist. That wasn't always the case. While the history major and aspiring teacher says she grew up in San Jose believing in equal rights for women, she was wary of that identity as a young teenager. "For a long time, I associated the word with being radical and not in a good way."

Women considered better coders – but only if they hide their gender When a group of computer science students decided to study the way that gender bias plays out in software development communities, they assumed that coders would be prejudiced against code written by women. After all, women make up a very small percentage of software developers – 11.2% according to one 2013 survey – and the presence of sexism in all corners of the overwhelmingly male tech industry has been well documented. So the student researchers were surprised when their hypothesis proved false – code written by women was in fact more likely to be approved by their peers than code written by men.

"Do-Me" Feminism and the Rise of Raunch From the book Feminism and Pop Culture by Andi Zeisler. Excerpted by arrangement with Seal Press, a member of the Perseus Books Group. Copyright Â© 2008. Constructing a politics of pleasure has been key to third wave feminism. Thanks to their brave and often unsettling analyses of sexual power structures and the connections between pornography and a larger system of male dominance, feminists of the 1960s and '70s had gotten roundly tarred as being antisex, antiporn, antiheterosexual, and just generally prudish.

5 Totally Normal Questions Transgender People May Be Afraid to Ask, Answered One of my favorite concepts that I’ve encountered as an activist is the idea of “holding space.” To break it down further, “holding space” is about making room for certain experiences, feelings, or perspectives to be acknowledged and affirmed that may otherwise be pushed aside or invalidated. Holding space can be powerful. A Form of Western Shamanism Created by a Woman for Women Feminist Shamanism® is a sophisticated shamanic practice for women that engenders personal growth and the gradual development of shamanic consciousness. It guides contemporary women to remember who they are and what their sacred responsibilities entail as they reclaim their natural feminine power and authority. My latest writing project, “Shamanic First Aid for Today’s Woman,” is a purse-sized 80-page booklet, which you can use to begin exploring and using feminist shamanic teachings. It is rich with simple feminist shamanic fixes for common issues faced by today’s women. It offers teachings, guidance, visualizations, breathwork exercises, and affirmation chants which will help you deal with the stresses of today’s world, and includes a six-page index so that you can quickly look things up on the go. It will be available for purchase beginning March 10th.

Let's Be Clear – My Gender Identity is Harmless Panel 1 (A person wearing glasses with short hair and a serious expression looks out from a purple circle) Justin: Let’s be clear. My gender identity is many things. But most of all? A broken idea of sex is flourishing. Blame capitalism Since the Toronto bloodbath, a lot of pundits have belatedly awoken to the existence of the “incel” (short for involuntary celibate) online subculture and much has been said about it. Too often, it has been treated as some alien, unfamiliar worldview. It’s really just an extreme version of sex under capitalism we’re all familiar with because it’s all around us in everything, everywhere and has been for a very long time. And maybe the problem with sex is capitalism. What’s at the bottom of the incel worldview: sex is a commodity, accumulation of this commodity enhances a man’s status, and every man has a right to accumulation, but women are in some mysterious way obstacles to this, and they are therefore the enemy as well as the commodity.

'Women are just better at this stuff': is emotional labor feminism's next fro... We remember children’s allergies, we design the shopping list, we know where the spare set of keys is. We multi-task. We know when we’re almost out of Q-tips, and plan on buying more. We are just better at remembering birthdays. From Circe to Clinton: why powerful women are cast as witches During the 2016 US presidential election, American social media was flooded with images of Hillary Clinton wearing a black hat and riding a broom, or else cackling with green skin. Her opponents named her The Wicked Witch of the Left, claimed they had sources testifying that she smelled of sulphur, and took particular delight in depictions of her being melted. Given that the last witch trial in the US was more than 100 hundred years ago, what are we to make of this? In the late 19th century, the suffragette Matilda Joslyn Gage asserted something revolutionary. The persecution of witches, she said, had nothing to do with fighting evil or resisting the devil. It was simply entrenched social misogyny, the goal of which was to repress the intellect of women.

To Men I Love, About Men Who Scare Me I got a promotion a few days ago, so I decided to stop for a drink on my way home — just me and my sense of accomplishment. I ended up alone in bar, running defense against a bouncer who held my ID hostage while he commented on my ass (among other things), and asked me vaguely threatening questions about my sex life. This is not a Yelp review. It’s not an angry rant, and it’s definitely not something women need to be reminded of. As far as I can tell there is only one good lesson to pull out of this otherwise shitty and all-too-familiar interaction, which is that in my experience, a lot of thoroughly decent men are still having trouble understanding it.