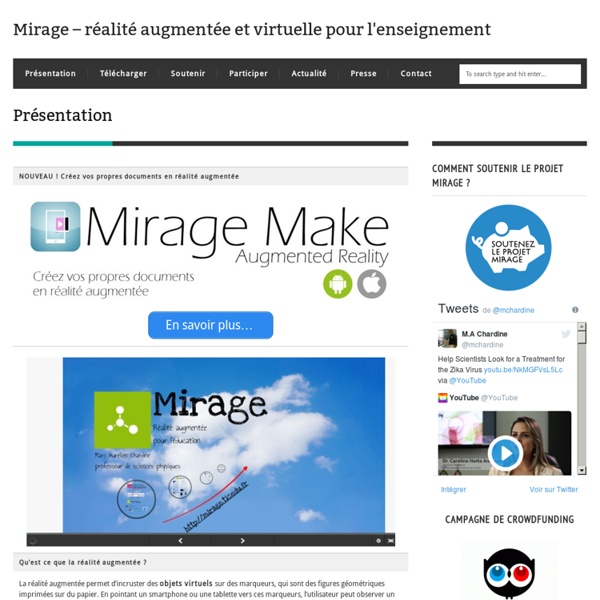 SeeMore Interactive – The Augmented Reality Retail App SeeMore Interactive brings retail to life, facilitating e-commerce and mobile shopping from virtually anywhere. It helps brands to allow their customers see more. This augmented reality retail app uses an advanced image recognition application to allow buyers to activate an interactive experience instantly through the camera of their smartphone. This smart technology is beyond augmented reality that allows real-life objects, products and prints to be displayed along with interactive content such as product details, offers, recommended products for purchase, loyalty points and more.

Standardized Tests 14 September, 2014 Photo Credit: Alberto G., via Flickr Voice 1 Welcome to Spotlight. I’m Ryan Geertsma. 5 ways to use Aurasma in your classroom After several years of waiting, the Aurasma is now easily available to all students! The fantastic augmented reality app could previously only be used legally by students older than 17, but in the latest update the recommended age has been changed to 4+. This opens up a world of possibilities in primary schools like my own. 1. Differentiation made easy You can easily use Aurasma to link students to videos that match their zone of proximal development.

Augmented Reality: A different view of learning With a pre-pilot underway showcasing the range of data collected by project students, we are beginning to conceptualise how data can be both accessed and presented in the best educational and pedagogic contexts. For the former, we anticipate two main entry points into the biodiversity data. The first, and most concerned with this project, is accessed through augmented reality platforms such as Layar. At present this is compatible with mobile devices running on the Andriod and iOS platforms, with further development rumoured for the Symbian and Bada platforms. Short research is underway within the College of Life and Environmental Sciences to determine current Andorid/iOS ownership trends amongst students, with the knowledge that this is a fastly moving sector with comparative market shares changing all the time, as discussed in detail within our Review of Available Augmented Reality Packages report.

January 22, 2016 In today's post, we have curated for you some of the best Math apps for middle school students. We included apps for both Android and iPad. The apps cover different mathematical skills and will definitely help students enhance their math learning and consequently perform better. 3-D Maps, Camera Phones Put 'Reality' in Augmented Reality Earthmine says its three-dimensional reality augmentation software can help locationally-aware directories and search engines label points of interest with more precision than Google Street View or other solutions can. Augmented reality software promises to let us see the world as the Terminator saw it: overlaid with digital information. Given that most of us aren’t cyborg assassins from the future, we’re more likely to use the technology to see restaurant ratings as we walk past that new taqueria, status updates floating over friends’ heads or a trail of digital breadcrumbs leading us back to our hotel rooms. Most of us will use smartphones instead of a head-mounted display because cellphone cameras help these services reconcile digital and physical reality without making you look like a cyborg assassin.

Lesson Plan: Updating Orwell's '1984' Overview | How does George Orwell’s vision of technology and its uses in “1984” compare with today’s reality? How have concerns about privacy and freedom expressed in the novel been manifested in the contemporary world? In this lesson, students compare and contrast the world, people and technologies of “1984” with those of today and create a treatment for a modern film, print or stage adaptation that revolves around current technologies. Materials | Full text of “1984,” computers with Internet access, software for podcasting and projection equipment, copies of the handout “1984” vs. Today (PDF), video cameras and film-editing software (optional) Warm-Up | Give students the following list of words from “1984”:

Putting the World In Their Hands: Augmented Reality in the Classroom Augmented reality at Avenues: The World Schools By Courtney Pepe When many of today’s teachers who grew up in Generation X are asked to reflect on traditional learning objects from their classrooms of the 1980’s and 1990’s, they think of paper, pencils, chalkboards, and textbooks. When they’re shown a series of pictures of those classroom’s from the ’70s, ’80s, and ’90s, and asked to describe them, they use adjectives like “utilitarian, boring, and two-dimensional.” The classrooms in which Millennials and Generation Z learn are a world apart from those of Baby Boomers and Generation X.

Creating Augmented Reality for Education The cARe project explores two examples of how Augmented Reality (AR) could be used to enhance learning. The examples focus on the use of AR with nursing students. Further details of the projects are described below. What Does E=mc2 Truly Mean? What does E=mc2, the most famous equation in history, mean? (Image Credit: PBS Space Time) Albert Einstein remains one of the greatest minds in history. His contributions to the fields of cosmology, physics and mathematics are unquantifiable, but arguably, the most important works were his theories of general and special relativity. Ultimately, they shed light on the intimate workings of the universe—from the nature gravity itself, to the outermost edges of black holes.

Now available: eDrawings for iOS with Augmented Reality We've all been there. Your manager or customer has been looking at 3D images of your latest product design for months on your computer. But when the first prototype is put on the table in front of them, they say something like "Are you sure that's the right size, because it looked smaller on the computer screen." And since you're on the verge of releasing the design to tooling, you mentally scramble to figure out a way to avoid redoing several weeks worth of work.