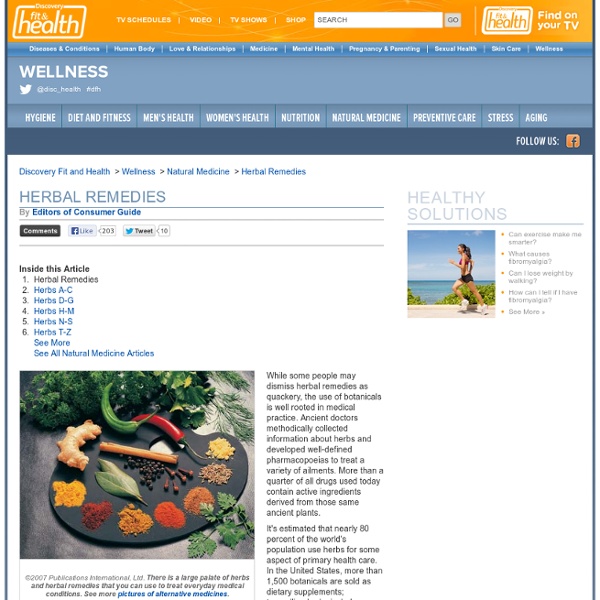 While some people may dismiss herbal remedies as quackery, the use of botanicals is well rooted in medical practice. Ancient doctors methodically collected information about herbs and developed well-defined pharmacopoeias to treat a variety of ailments. More than a quarter of all drugs used today contain active ingredients derived from those same ancient plants. It's estimated that nearly 80 percent of the world's population use herbs for some aspect of primary health care. In the United States, more than 1,500 botanicals are sold as dietary supplements; top-selling herbs include echinacea, garlic, goldenseal, ginseng, ginkgo, saw palmetto, aloe, ephedra, Siberian ginseng, and cranberry. Clinical studies on a handful of herbs are underway, but to help you understand the benefits and risks, we've compiled a comprehensive guide to herbs, including potential uses, side effects, and precautions. This information is solely for informational purposes.

Health Benefits Of Parsley, One of Nature's Top Antioxidant Foods Parsley has much more use than just being a decorative garnish on your plate. Parsley is actually a storehouse of nutrients that features a delicious green and vibrant taste. The health benefits of parsley come from two components — its volatile oils and antioxidants called flavonoids. It's a little-known fact that herbs (and spices) such as parsley have far greater concentrations of antioxidants than any common fruit or vegetable source. Herbs also contain a particularly wide variety of antioxidants as well, making them one of the top antioxidant foods around. Antioxidants are nutrient compounds found in virtually all plant foods (and also manufactured in your body).

Ancient Secrets: the Truth About Energy Healing Energy is all around us – right? Actually, we ARE energy, and when we need to heal our physical bodies, we do so by applying the right energy healing techniques to raise our vibration to correspond with the energy of well-being. Okay, admittedly that’s a bit “out there” given the teachings of modern medicine that focuses on alleviating physical and psychological symptoms without addressing the true cause of the ailments… the cause being an overabundance of low-vibrating energy in the individual’s energy field or imbalances in that field. Energy is Medicine Biodynamic Organic Farming - What is it? Share by Shauna Willetts – Eco 18 Organic, pesticide free, GMO free and parabens. These are some common terms heard, or seen on a day-to-day basis, but what about the term “biodynamic organic farming”? It sounds pretty scary, doesn’t it? It’s not; it’s actually a pretty awesome thing.

Oregano Has 4 Times The Antioxidant Potency Of Blueberries by KAREN FOSTER Oregano is widely considered as nature’s antibiotic. It is an indispensable spice in Turkish, Greek, Portuguese, Spanish, Latin American and Italian cuisine, oregano is the must-have ingredient in tomato sauces and pairs well with capers and olives. Health Benefits of Thyme, One of Nature's Top Antioxidant Foods The health benefits of thyme include relief from respiratory and gastrointestinal problems, improved mental acuity and protection from cancer-causing toxins. These benefits are the result of thyme's rich antioxidant content. Thyme contains a variety of important bioflavonoids and volatile oils, including thymol.

27 Medicinal Plants Worth Your Garden Space Playful as kids are, accidents happen. And the accident that befallen me at 7 years old was the feeling of the hot exhaust pipe of a motorcycle kissing the skin of my leg. Grandma was around and saw it. Immediately, she took out a knife and slice the thick lower part of the aloe vera plant by the garden and rubbed the exposed end on the burn. Looking back, I realized that it was important to have medicinal plants around the house cause you never know when you might need them. So here are a list of plants that have the highest medicinal value compared to the other million species around the world worth planting around the house.

Scientific Proof Thoughts & Intentions Can Alter The Physical World Around Us Dr. Masaru Emoto, a researcher and alternative healer from Japan has given the world a good deal of evidence of the magic of positive thinking. He became famous when his water molecule experiments featured in the 2004 film, What The Bleep Do We Know? His experiments demonstrate that human thoughts and intentions can alter physical reality, such as the molecular structure of water. Given that humans are comprised of at least 60% water,his discovery has far reaching implications… can anyone really afford to have negative thoughts or intentions?

10 Steps to Starting a Community Garden In Vancouver, developers discovered that turning their vacant lots into community gardens while they waited for their next project to be ready could save them hundreds of thousands of dollars in city taxes. Putting a garden on a commercially zoned site allows it to be reclassified as public park or garden, resulting in an 80% tax saving — even if it is known that the garden is temporary. In one downtown property where a hotel parking lot was converted to an urban farm, the property owner is saving $132,000 a year in taxes. Given the realities of real estate land values in cities, this policy at least rewards developers for setting up gardens and managing some of them — however temporarily. For the community gardeners involved, even getting a temporary plot is obviously worth it. Getting a Permanent Garden Site

Herbs for Pain Try some of the herbs shown here for effective and long-lasting pain relief. It is not necessary and certainly not advisable to take drugs or go for needless operations due to chronic pain. Herbs can also be substituted for medicines, and increasing numbers of people are turning to herbs as an alternative to harmful drugs. There are countless herbs for pain, the most common of which are shown below. Feverfew A herb found in gardens easily, which cures migraines and headaches. When taken regularly, feverfew stops the intensity and also the frequency of migraines.

Amazing Moringa: Medicinal, Edible and Easy to Grow By Ansel Oommen Guest Writer for Wake Up World The Moringa Tree, also known as the Drumstick tree is nearly entirely edible.