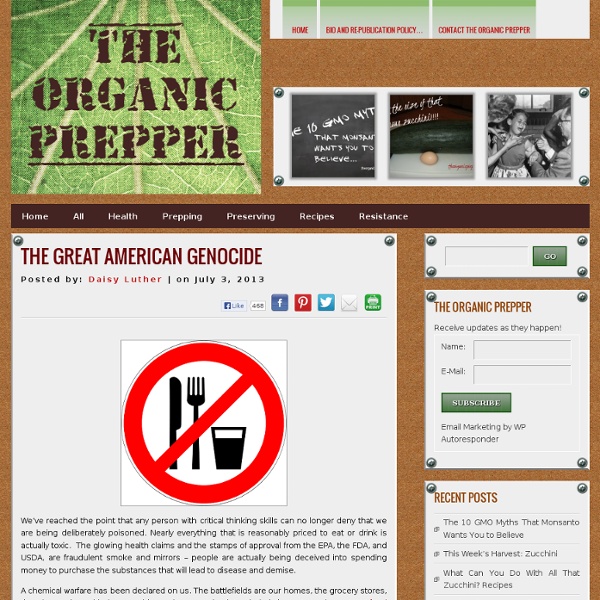 We’ve reached the point that any person with critical thinking skills can no longer deny that we are being deliberately poisoned. Nearly everything that is reasonably priced to eat or drink is actually toxic. The glowing health claims and the stamps of approval from the EPA, the FDA, and USDA, are fraudulent smoke and mirrors – people are actually being deceived into spending money to purchase the substances that will lead to disease and demise. A chemical warfare has been declared on us. The battlefields are our homes, the grocery stores, the pharmacies. This is genocide, and we are the intended victims. Turning on the tap in many places releases a toxic stream into your glass or your shower. But this is just the tip of the iceberg. Chlorine: This removes disease-causing bacteria, which is great, but it also creates numerous toxic by-products, like chloroform and trihalomethanes. According to Dr. Ammonia: Fluoride: The grocery store is little more than a gauntlet. GMOs: Pesticides:

Colony Collapse Disorder Is a Fraud: Pesticides Cause Bee Die-Offs Heidi Stevenson, Green Med InfoWaking Times Years ago, Gaia Health informed that bee dieoffs are a direct result of pesticide nerve agents called neonicotinoids. The term, Colony Collapse Disorder, is fraudulent, designed to direct attention from the known cause. Agribusiness, the poison manufacturers making death-producing pesticides, is the other face of Big Pharma.

Radley Balko: “Once a town gets a SWAT team you want to use it” Radley Balko’s new book, “Rise of the Warrior Cop,” details how America’s police forces have grown to look and behave more like soldiers than neighborly Officer Krupkes walking the beat. This new breed of police, frequently equipped with military weapons and decked out in enough armor to satisfy a storm trooper, are redefining law enforcement. How did this happen? For decades, the war on drugs has empowered police to act aggressively. More recently, 9/11 and school shootings enforced the notion that there’s no such thing as too much security.

Natural Detox to remove allergies, mercury, chemicals, GMOs, parasites Share by: JB Bardot Diatomaceous earth (DE) is a naturally occurring rock made from the skeletons of fossilized diatoms, a type of hard-shelled algae. When ground into a fine powder, diatomaceous earth works mechanically to destroy a wide range of pests, insects, parasites and pathogens by cutting through the exoskeleton, absorbing bodily fluids and causing them to die. Food grade diatomaceous earth is chemical-free and non toxic. Vanishing Point: How to disappear in America without a trace Where there's water, life is possible. True, it may be very difficult and very hard to live, depending, but anyone who's driven, hiked, or camped in the American South West will have noticed that cities and ranches crop up where there's surface water or where there's been a well dug. Within the state of California, Nevada, Arizona, Utah, New Mexico, and Colorado, there are deserts, mesas, mountains, and forests where normally people never or rarely visit; not-so-secret places where there's water, access to a road within a day's hike, and where a fairly rugged individual may hide while remaining basically healthy, marginally well fed, and reasonably sane. In this section I'll look at two such environments, neither of which I would recommend, but one of which I'd suggest is a reasonable way to live in basic health while either on the run, hiding out from the law, old girl friends, the draft for an illegal war, putative wives and such.

Pesticide-Contaminated Meal Kills 22 Children in India, Protests Spark Image from Agence France-Presse (AFP) Twenty-two children are dead so far in the village of Dharmasati Gandaman, in India’s Bihar state. The cause is not some communicable disease or strange virus, but their school lunch. According to the BBC, the children all ate from the school’s free mid-day meal. Forty-seven fell ill and 28 had been taken to area hospitals. The free-lunch program is designed to both combat hunger and increase school attendance in the poverty-stricken village.

MIT Professor Exposes Climate Change Hysteria byMikael ThalenJanuary 17th, 2014 Updated 01/17/2014 at 4:58 pm A leading climate change figure has come out against the government’s continued and ridiculous climate change hysteria. Speaking in regards to Massachusetts’ new $50 million climate change proposal, MIT Professor Richard Lindzen, a leading figure in the climate change movement, pointed out the absurdity of blaming every weather event on global warming and climate change. “The changes that have occurred due to global warning are too small to account for,” Lindzen told WBZ-TV.

33 Conspiracy Theories That Turned Out To Be True Most people can’t resist getting the details on the latest conspiracy theories, no matter how far-fetched they may seem. At the same time, many people quickly denounce any conspiracy theory as untrue … and sometimes as unpatriotic or just plain ridiculous. Lets not forget all of the thousands of conspiracies out of Wall Street like Bernie Madoff and many others to commit fraud and extortion, among many crimes of conspiracy. USA Today reports that over 75% of personal ads in the paper and on craigslist are married couples posing as single for a one night affair. When someone knocks on your door to sell you a set of knives or phone cards, anything for that matter, do they have a profit motive?

Don't let Monsanto take this one away. Dear Organic Consumer, Last year this time, you were pouring your heart and soul into winning the GMO labeling battle in California. So was I. How to be “Stealth” Homeless “There, but for the grace of God, go I” goes the old canard, usually in reference to a disheveled homeless person, dressed in rags sitting on a street corner begging for change and smelling of b.o. What you are seeing is the result not of homelessness, per se, but dysfunctionality in general, due to substance abuse, mental illness and a host of other contributing factors. You may see homeless people everyday and never suspect them. Conversely, that panhandler on the street corner may not be homeless at all. But, perhaps, you have that fear in the back of your mind that such a fate could happen to you.

GMO multi-toxin crops continue to backfire as more insects become resistant to crop chemicals (NaturalNews) Promises made by the biotechnology industry about the alleged robustness of its genetically modified (GM) crops are proving to be false, as research out of the University of Arizona (UA) uncovers a growing resistance by pests to even the most advanced crop chemical technologies in use today. Published in the journal Proceedings of the National Academy of Sciences, the new study explains how multi-toxin GM crops are quickly losing their ability to fend off pests, which could lead to a complete GMO failure in the very near future if alternate interventions are not enacted. The study evaluated specific GM crops like corn and cotton that have been infused with a genetic mutation involving the bacterium Bacillus thuringiensis (Bt), as well as several other toxins that grow inside the plant to target pests. But according to the UA report, insects and other pests are outsmarting this approach. Sources for this article include: