Dumbing of Age - A college webcomic by David Willis 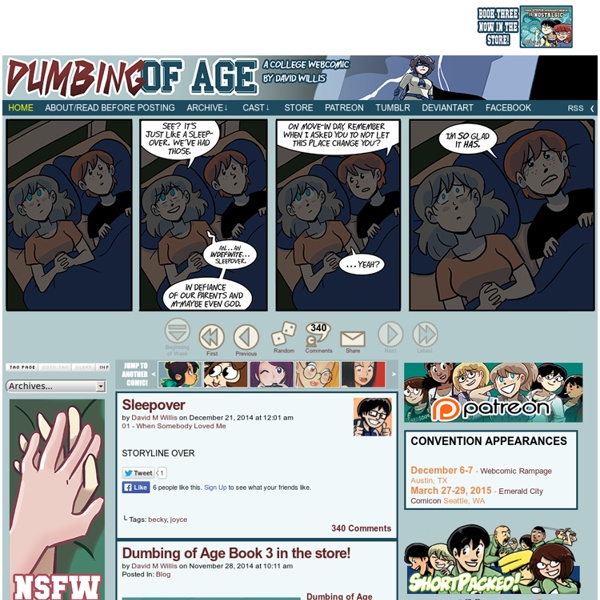 It’s not strictly Dumbiverse (and by “strictly” I mean “not at all”), but Walky Performs a Sex is being followed up by another sexytimes story set in my Vintage Webcomics Universe, the Walkyverse, by way of Shortpacked!. “My Lesbian” or “Once We Hit 88mph We’re Going to See Some Serious [blank]“ features (SPOILERS???) soon-to-be-wed couple Leslie and Robin DeSanto, whose Dumbing of Age doppelgangers are our favorite gender studies teacher and Roz’s congresswoman sister. It’s sixteen pages and it’s going live at midnight the morning of Valentine’s Day on Slipshine. If you’ve already got a Slipshine account, sweet! If you don’t, well, now I’ve provided you at least two reasons to get one.

Related:  Webcomics • a voir / a classer

SUBNORMALITY! All content copyright Winston Rowntree, 2015. Museum previously seen here and then here. PHD Comics Coming Soon - Stay tuned for a BIG announcement about an awesome project Jorge is working on! PHD Store - Our store was down for a while, but now it is back! Free excerpt from The PHD Movie 2! by Terry Blas & Kimball Davis This is the last page for the Friday issue! All that’s left is Saturday then Briar Hollow Vol. 1 will be complete! I hope you guys have been enjoying it so far. a softer world: 123 joey The We Are Become Pals book is here! You can buy it right now, for $16 in hardcover! The Adventures of Boschen and Nesuko Chapter 1: Killing the Dead Chapter 2: The Perfume Stinks Chapter 3: Introducing Oneself to a Beautiful Topless Woman Chapter 4: Some Space Chapter 5: The Magical and Mysterious Game of Flirtation

Fantasy Webcomic Comic Graphic Novel It’s finally time to present the submissions placed between the positions 13 and 25 of the Sandra and Woo and Gaia artwork contest. There are some great works of art to be seen here, partially thanks to the extension of the submission period. I would like to thank all artists who have submitted a drawing or other piece of art. Don’t forget to check out the first batch of submissions which I posted on Monday. Comics at Daily Kos (Click to enlarge) There were so many mind-blowingly illogical quotes in Roberts' McCutcheon v. FEC opinion, it was hard to pick just one for the cartoon. Another classic: "[Many people] would be delighted to see fewer television commercials touting a candidate’s accomplishments or disparaging an opponent’s character,” he wrote.

Engaging The Enemy Truth or Dare—Page 9 Now, now, Tsunami… We just had a big leap forward in the number of new folks joining our Patreon campaign in the last couple days so we’re now at $7918/month over at the Patreon Page! That means we’re less than $90 away from unlocking the fully nude, Full Monty Tsunami painting by Marccus! Here’s the SFW headshot: Engaging The Enemy Flyboy Bonus Comic—Page 16 Yeah, dude, what the hell? Over at the Patreon Page, $5+ Patrons got to see a very special image on Sunday: Adam’s pencils for Flyboy’s very first kiss! And it’s with somebody you all know. Nonprofit Hospitals Faulted For Stinginess With Charity Care Lori Duff with her baby, Henry, and other son, Logan, at home in Columbus, Ohio. Jenny Gold/Kaiser Health News hide caption itoggle caption Jenny Gold/Kaiser Health News Even before the hospital bills started coming, Lori Duff and her family were living paycheck to paycheck. So when the debt collector called the Columbus, Ohio, mother and demanded $1,800 for the prenatal visits she'd had while pregnant with her third son, she panicked. The collector claimed the local Catholic hospital Duff had gone to could garnish 25 percent of each of her paychecks to pay off the bill.

30-Something Everyday Tasks You Might Be Doing 'Wrong' My breakfast this morning — blown, not peeled. Matt Thompson hide caption itoggle caption Matt Thompson