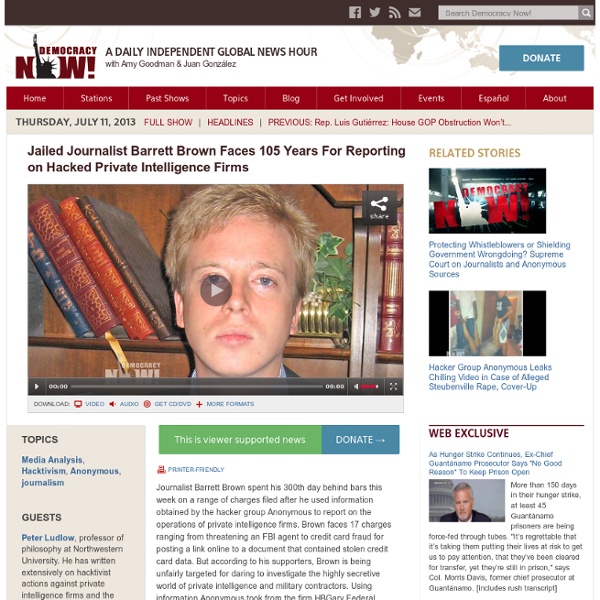 Related:  Whistleblower • US of A and What You may Face

Of Course, Good Cop Speaks Out About Arrest Quotas And Tickets - Gets Fired!! (Video) (Before It's News) Does anyone remember a time when a whistleblower was protected and taken seriously? One such incident that comes to mind is Watergate. Deepthroat was commended for their bravery in speaking out against corruption. Welcome to our new country where telling the truth gets you, fired,harassed, or killed. Hello Tyranny! Hanners blew the whistle on the department’s tactics and was eventually fired for refusing to comply and keep quiet. “There are not that many speeders, there are not that many people running red lights to get those numbers, so what [the police] do is they lower their standards,” says Hanners. Hanners repeatedly voiced his concerns through his chain of command, and the department responded that these requirements are necessary for increasing productivity. Yet Hanners firmly believes that the quotas are entirely revenue driven. Thank you, Justin Hanners, for trying to shed light on this corruption! We salute you, Sir! If only more police officers could be like you!

So let me get this straight, we fast track renditions but hunt down whistleblowers on presidential planes! “The CIA was granted permission to use rendition (to the USA of indicted terrorists) in a presidential directive signed by US President Bill Clinton in 1995, following a procedure established by US President George H. W. Bush in January 1993”. This program kicked into high-gear under Bush junior after 911 and continues to this day under the Obama administration. “According to a US Congress report [2008], up to 14,000 people may have been victims of rendition and secret detention since 2001. Some reports estimate there have been twice as many. The map below shows the countries involved in fast tracking rendition flights, helping to transport U.S. captives to secret prisons – black sites - across the globe, condemning innocent men, women, and children to confinement, torture, and death. click to enlarge - source Bolivians Indignant at European Treatment of President Morales Further coverage: U.S. As Malcolm X warned us in his Audubon Ballroom speech in Harlem in 13 December 1964:

Bradley Manning's Testimony LEAKED One Era's Traitor Is Another Era's Whistle-Blower - By J. Dana Stuster When the Guardian named Edward Snowden as the source behind a series of leaks last week on National Security Agency surveillance programs, the backlash was swift. In a rare show of bipartisanship, several members of Congress -- including House Speaker John Boehner, Sen. Dianne Feinstein, and former U.N. Ambassador John Bolton -- labeled the 29-year-old contractor a traitor. The Guardian's profile, meanwhile, characterized Snowden as "one of America's most consequential whistleblowers" and compared him to Daniel Ellsberg. The Guardian isn't alone in comparing Snowden to Ellsberg, who leaked a secret Pentagon-authored history of the Vietnam War, known as the Pentagon Papers, to reporters at the New York Times and Washington Post in 1971. But the reaction to Snowden's leaks is in many ways different than the response Ellsberg received when the Pentagon Papers were published four decades ago. When Ellsberg did face harsh criticism, it was often personal in nature.

Journalist Barrett Brown Spends His 300th Day Behind Bars Journalist Barrett Brown spent his 300th day behind bars this week on a range of charges filed after he used information obtained by the hacker group Anonymous to report on the operations of private intelligence firms...Using information Anonymous took from the firm HBGary Federal, Brown helped discover a secret plan to tarnish the reputations of WikiLeaks and journalist Glenn Greenwald of The Guardian. Brown similarly analyzed and wrote about the millions of internal company emails from Stratfor Global Intelligence that were leaked in 2011. We speak to Peter Ludlow, professor of philosophy at Northwestern University, whose article “The Strange Case of Barrett Brown” recently appeared in The Nation. “Considering that the person who carried out the actual Stratfor hack had several priors and is facing a maximum of 10 years, the inescapable conclusion is that the problem is not with the hack itself but with Brown’s journalism,” Ludlow argues. Transcript This is a rush transcript. [break]

Gun-death tally: Every American gun death since Newtown Sandy Hook shooting (INTERACTIVE) The answer to the simple question in that headline is surprisingly hard to come by. So Slate is collecting data for our crowdsourced interactive. This data is necessarily incomplete (click here to see why, and to learn more about @GunDeaths, the Twitter user who helped us create this interactive). But the more people who are paying attention, the better the data will be. You can help us draw a more complete picture of gun violence in America. Update, Dec. 31, 2013: After a year of gun deaths, Slate is retiring this project. Click a marker below to filter incidents by that location. © OpenStreetMap contributors Any Age Group Adult Teen Child Matched Deaths: 12,042 or more between Newtown and Dec. 31, 2013 Fetching latest data Show Methodology Each person under 13 years of age is designated "child"; from 13 to 17: "teen"; 18 and older: "adult." The same icons used to represent males is also used to represent individuals of unknown gender. —Dan Kois, senior editor, Slate

WikiLeaks (Documentary) Hacker Who Exposed Steubenville Rapists Raided By FBI, Faces Ten-Year Prison Sentence In April, the FBI quietly raided the home of the hacker known as KYAnonymous (whose real name is Deric Lostutter) in connection with his role in the Steubenville rape case. Today he spoke out for the first time about the raid and his motivations for pursuing the Steubenville rapists.Lostutter may deserve more credit than anyone for turning Steubenville into a national outrage. After a 16-year-old girl was raped by two members of the Steubenville High football team last year, he obtained and published tweets and Instagram photos in which other team members had joked about the incident and belittled the victim.Lostutter says he played no role in the hacking the Steubenville team’s fan page; he points out that another hacker, Batcat, has publicly taken the credit.

'Sometimes You Have to Pay a Heavy Price to Live in a Free Society' The following is a rush transcript by Common Dreams of the statement made by Pfc. Bradley Manning* as read by David Coombs at a press conference on Wednesday following the announcement of his 35-year prison sentence by a military court: The decisions that I made in 2010 were made out of a concern for my country and the world that we live in. Since the tragic events of 9/11, our country has been at war. We've been at war with an enemy that chooses not to meet us on a Manning invoked that late Howard Zinn, quoting, "There is not a flag large enough to cover the shame of killing innocent people." ny traditional battlefield, and due to this fact we've had to alter our methods of combating the risks posed to us and our way of life. I initially agreed with these methods and chose to volunteer to help defend my country. In our zeal to kill the enemy, we internally debated the definition of torture. This work is licensed under a Creative Commons Attribution-Share Alike 3.0 License

Ashley Jessica, Student Activist, Says She Was Violated During TSA Pat-Down A 27-year-old Ph.D. student says a TSA agent touched her vaginal area during a pat-down at a California airport; however, a representative told The Huffington Post the agents followed procedure. Ashley Jessica , a psychology student from Toronto who has recently campaigned to raise awareness about invasive TSA practices , told HuffPost that she and her mother chose to opt out of a full-body scan at San Diego International Airport on May 23. Because they opted out, TSA agents said they had to give her an "extensive pat-down." About halfway into the procedure (at the 4:35 minute mark in the video above), a TSA agent feels the area between Jessica's breasts, and Jessica puts up her hands as if to protect herself from further touching. Less than two minutes later, the agent appears to run her hands all the way up the inside of Jessica's leg. "OK, you need to hold still for this process," says another TSA agent, who is off-screen. "She just touched my vagina!" (h/t LA Weekly ) Also on HuffPost:

Whistleblower General Cartwright: demonized by a criminal US government (Before It's News) RELATED: Beyond Snowden: US General Cartwright has been indicted for espionage 21st Century Wire says… With all the talk of Edward Snowden, many would not have heard the name General James Cartwright, who is quite possibly the most high-ranking, high-profile whistleblower in the history of the United States, who is the Obama administration’s latest victim by way of the 1917 Espionage Act. GEN. As we pointed out earlier this week, Cartwright was regarded as ‘Obama’s General’ and chief military adviser, but he fell foul of K Street and war financiers, after blowing the whistle on the highly illegal, and potentially dangerous, ‘Operation Olympic Games’, which planted the infamous Stuxnet and Flame viruses in Iranian civilian nuclear facilities in an attempt to destroy their energy program. All this, from a US government that does not even have a moral leg to stand – as America sits back and watches the night of the long knives take place right before their eyes. Gen.

Eric Holder Signed Off On Search Warrant For James Rosen Emails: NBC News Attorney General Eric Holder personally signed off on the warrant that allowed the Justice Department to search Fox News reporter James Rosen's personal email, NBC News' Michael Isikoff reported Thursday. The report places Holder at the center one of the most controversial clashes between the press and the government in recent memory. The warrant he approved named Rosen as a "co-conspirator" in a leak investigation, causing many to warn that the Justice Department was potentially criminalizing journalism. The Justice Department later said that it did not intend to press any charges against Rosen. The attorney general is usually required to approve requests to search journalists' materials, but that rule does not extend to email records . The revelation came hours after President Obama said in a speech that he was concerned about the potential implications of the Fox News and AP investigations. Also on HuffPost:

Will the U.S. Gov’t Target Whistleblowers With Drones? Yes, things have come this far. There is open talk of killing NSA leaker Edward Snowden via a drone strike. Remember that saying “Don’t kill the messenger?” There is open talk in the media of killing National Security Agency whistleblower Edward Snowden via a drone strike. The online version of the magazine Popular Science had point and counterpoint articles debating all the reasons why the U.S. government might or might not consider drone striking Snowden in Hong Kong, the city he ran to fearing federal retribution for leaking information regarding the NSA’s PRISM program, a vast spying operation that has been turned against the American people at large at the expense of their constitutional rights. Truthstream Media reporters Melissa Melton and Aaron Dykes discuss this apathetic acceptance of government assassination of American citizens: Scarier still is the fact that the idea itself is plausible enough to garner such casual banter. I don’t think for a minute that he is a traitor.

Related:
Related:  Whistleblower   -  US of A and What You may Face