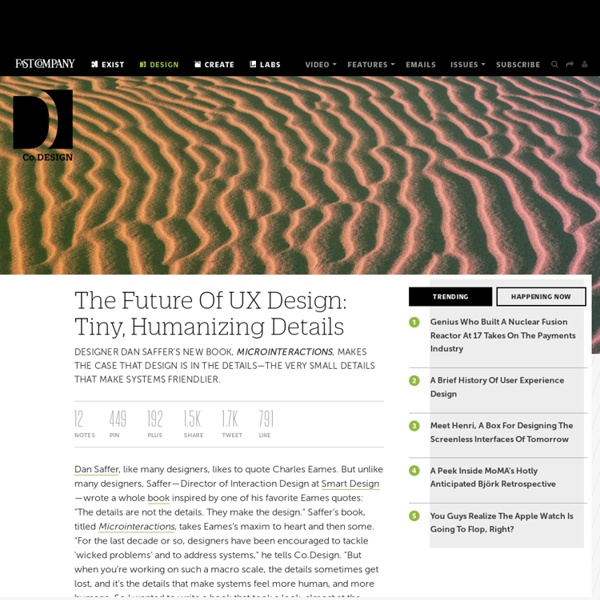 Dan Saffer, like many designers, likes to quote Charles Eames. But unlike many designers, Saffer—Director of Interaction Design at Smart Design—wrote a whole book inspired by one of his favorite Eames quotes: "The details are not the details. They make the design." Saffer’s book, titled Microinteractions, takes Eames’s maxim to heart and then some. "For the last decade or so, designers have been encouraged to tackle 'wicked problems’ and to address systems," he tells Co.Design. "But when you’re working on such a macro scale, the details sometimes get lost, and it’s the details that make systems feel more human, and more humane. So what is a "microinteraction," anyway? These atomic design moments, Saffer argues, are what whole products, and even whole systems and "wicked problems," ultimately boil down to. When microinteractions succeed—even invisibly, which is how most of them do—they make an emotional difference that’s greater than the sum of their tiny parts.

Effective Ways to Create a Secure Mobile App for Providers Healthcare providers around the world are busy creating internal business apps in order to help clinicians enhance patient care or streamline core processes. However, they come across several challenges in terms of privacy and security. Designing an app that work well for a doctor or nurse working at various hospitals is not easy, at times several in the same day. ‘Beautifully-Crafted Microinteractions’: Dan Saffer’s Latest Book Hits Big on the small stuff Releasing later this year, renowned interaction design guru Dan Saffer’s latest book Microinteractions is bound to spark some new thinking patterns for physical and digital good designers…and we have your passport to the pre-release excerpt here. Dan Saffer is no stranger to interaction design. Having written three previous books on the subject-Designing for Interaction, Designing Gestural Interfaces, and Designing Devices, the guy has you fairly well covered regardless if you’re just starting out or need a solid reference library. As an industrial design student, I consistently referred to his literature in my final year of school–where I veered off into the philosophies of interaction design heavily in my final projects. But what is a microinteraction? According to Dan:

Why Her Will Dominate UI Design Even More Than Minority Report A few weeks into the making of Her, Spike Jonze’s new flick about romance in the age of artificial intelligence, the director had something of a breakthrough. After poring over the work of Ray Kurzweil and other futurists trying to figure out how, exactly, his artificially intelligent female lead should operate, Jonze arrived at a critical insight: Her, he realized, isn’t a movie about technology. It’s a movie about people.

How To Apologize Online How To Apologize Online In Fertile Medium on 26 June 2013 Hint: Do it like Kickstarter, not Paula Deen. Why a New Golden Age for UI Design Is Around the Corner Innovations like this present great challenges for designers. Today’s app and software designers already have a deep understanding of how customers interact with their products. They know down to the pixel where to place a button, how fast a screen should scroll, and how to make an app simple without making it simplistic.

Best Strategies to be successful in Digital Marketing Going by the latest reports the total expenditure on digital ads is certain to surpass on television ads and this indicates that the digital marketing industry is rising and will continue to grow in the near future. In fact recently Facebook noticed huge increase in its earnings with advertisers spending good time on advertising via the social media network. Going by the rapid growth in the digital world, companies are making huge investments in digital media, online marketing and ads. However, not the companies succeeded in getting a good return on the investments made by them. This evolvement in digital marketing certainly signified that marketers are required to keep up with these changes in order to attain the desired results. Or else there are going to be low returns through digital spending and that is of absolutely no use.

Self-study Interaction Design In classes and cocktail hours, lots of people ask me either how they can switch careers into interaction design, or how they can improve their self-trained “IxD” chops. Of course Cooper offers a number of awesome training courses to help folks do just that (but we can’t be everywhere in the world at once) and there are great university courses here in San Francisco Bay Area and around the world (but not everyone can take that kind of time off). So if you’re a self-starter, unable to attend a training session and can’t take time off for school, or want to be able to speak the language of interaction design, what can you do?

How Millennials Require Us to Design the Technologies of Tomorrow You’ve seen them walking around shopping malls, college campuses and summertime social gatherings — those packs of sleepy-eyed teens with their heads down and eyes glued to their smartphones. Even though they cluster together in groups, you notice they don’t make direct eye contact or utter any sounds to each other except to share a video or Tweet, since each is immersed in his or her own text message conversation or social media exchange. One might even be sending a text to another only a few feet away. Whether we like it or not, the zombie apocalypse is upon us and unlike the movies dedicated to this popular genre, the millennial generation will prove to be the most influential, distracted and finicky demographic in history when it comes to technology use.