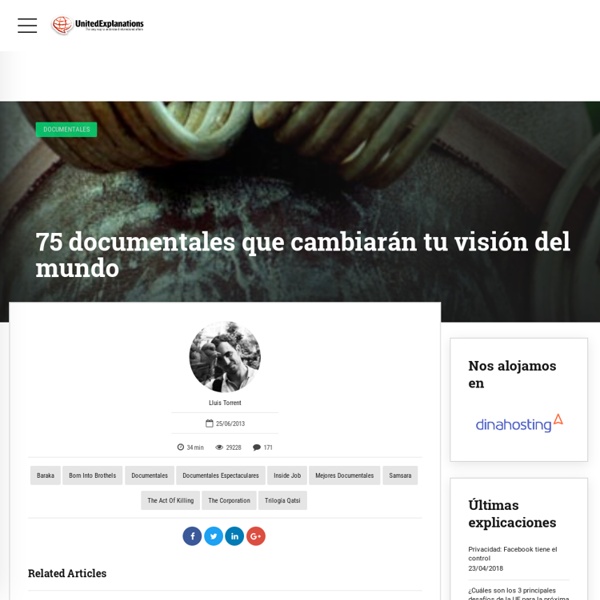 10 Dark and Disturbing Animated Films That Are Worth Your Time In many Western circles, animated film is fundamentally affiliated with child-friendly films spawned by the likes of Disney and Pixar. From Snow White and the Seven Dwarfs to Toy Story, the capability of animation to portray imaginative worlds in imaginative ways has enriched childhoods for several generations. Of course, animation has not been limited to Disney nor to children, and many of the greatest stories told through cinematic drawing have arisen in the East as well. The likes of Hayao Miyazaki and Katsuhiro Otomo have created absorbing dramas and adventures that breathe through animated images, telling tales for both children and adults alike.

50 Things Everyone Should Know by Mark and Angel Self-reliance is a vital key to living a healthy, productive life. To be self-reliant one must master a basic set of skills, more or less making them a jack of all trades. USDA Admits Exterminating Birds, Crops, and Bees The USDA has been under fire recently for its admitted assault against nature, after multiple investigations have uncovered its deliberate tampering with both plants and animals alike. One such investigation has put an end to the mystery surrounding the death of millions of birds, with USDA documents revealing the organization’s role in the massive slaughter. In addition to the mass bird killings, it turns out the USDA was fully aware that a highly-popular herbicide chemical was a known bee-killer, which may have aided the bee decline. The USDA has also threatened the genetic integrity of the nation’s crops.

Food - Recipes, Cooking Tips & Food News Here's how to make Al Roker's famous cold-brew coffee Al's cold-brew coffee has been the talk of the show this week. Slightly sweet with notes of chicory,... How to avoid weight gain during the holidays, the easy way Soulseek Soulseek Discussion Google Group Submitted by Nir on Mon, 05/23/2016 - 11:35 For a while now I've been having to manually approve posts and most comments to stem the tide of constant spam that's been hitting the forum for as long as I can remember. The 20 Best Movies about Art and Artists “Films about art and artists” covers a variety of things, from biopics about artists dead or imagined, to documentaries on living ones. However, the best of them are the ones that are able to teach us something about the medium they depict, or about the people who create it. These films portray artists as compelled to create from an inner need, whether for therapeutic, spiritual, or philosophical reasons. They celebrate the unique worldviews such individuals often possess, while outlining their limitations, from their heightened emotionality to their predisposition to mental illness. At the same time, they explore the relationship between art and the viewer, as well as art’s somewhat unsettling contiguity to wealth and power.

These are the most obese countries in the world A recent study showed that 700m people across the world are obese. These maps show obesity levels around the world - with red showing countries with the highest proportion of people classified as obese and green having the lowest proportion. The graphics were created by Clinic Compare using data from the CIA’s World Factbook and show that obesity is a problem affecting every continent. California has just one year of water left California is drying up and it’s happening faster than you think. The Los Angeles Times reports that January of this year was the driest on record since 1895. Groundwater and snowpack levels are also at an all-time low and according to NASA satellites, all of the water in the Sacramento and San Joaquin river basins—all of it—is 34 million acre-feet below normal. Reports indicated that, last year, California had approximately two years of water remaining, and the water depletion is right on schedule, as estimates now suggest that just one year of water is left in the coastal state. Where has the water gone? Ask the farmers.

Designer Womenswear New Classical. For Spring/Summer 2017 Mary Katrantzou looked introspectively to Greece, the country of her birth. Exploring its rich history, mythology and culture, she dug deep into her own work. This collection is an archaeological exploration, unearthing the classics of Katrantzou. The ancient civilisation of the Minoans gave initial inspiration.

The 13 Best Documentaries About True Crimes While the human obsession with true crime might be innate, the nonfiction genre is relatively new to be taken seriously. With the recent success of the HBO series, The Jinx, and the hit podcast, Serial, true crime seems to be on everybody’s minds. Investigating crime might be inherently interesting for anybody with a taste for documentary, but there’s a moral and ethical standard that comes with any story of this kind. Also, taste plays a huge factor in whether these films stray into camp or exploitation. All you need to know about blockchain, explained simply Many people know it as the technology behind Bitcoin, but blockchain’s potential uses extend far beyond digital currencies. Its admirers include Bill Gates and Richard Branson, and banks and insurers are falling over one another to be the first to work out how to use it. So what exactly is blockchain, and why are Wall Street and Silicon Valley so excited about it? Currently, most people use a trusted middleman such as a bank to make a transaction. But blockchain allows consumers and suppliers to connect directly, removing the need for a third party. Using cryptography to keep exchanges secure, blockchain provides a decentralized database, or “digital ledger”, of transactions that everyone on the network can see.