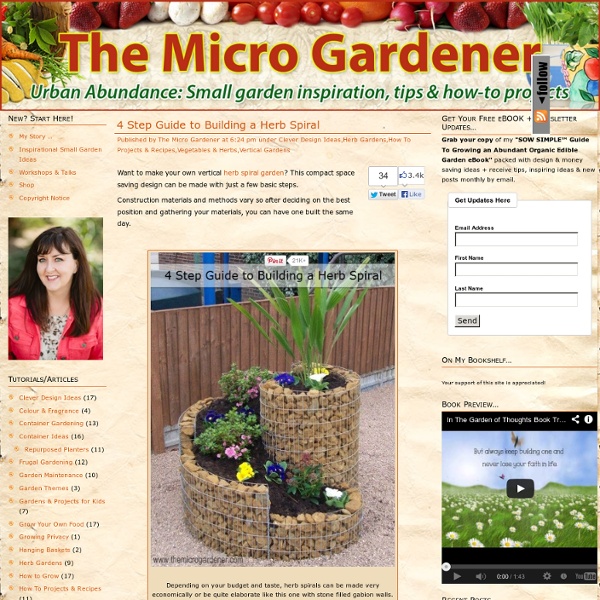 Want to make your own vertical herb spiral garden? This compact space saving design can be made with just a few basic steps. Construction materials and methods vary so after deciding on the best position and gathering your materials, you can have one built the same day. Depending on your budget and taste, herb spirals can be made very economically or be quite elaborate like this one with stone filled gabion walls. * [The original link to this image (via Cara-Ornamentals) is no longer available. If you like this particular design and want to learn to make the curved wire baskets, see the end of this post for videos & wire basket suppliers for Gabion Herb Spirals. Materials you’ll need Cardboard (without ink or tape), weed mat or gravel – optional but useful to kill weeds if building your spiral straight on top of lawn. Gather edging materials e.g. bricks, pavers, stones, rocks – choose long-lasting materials for a permanent structure. Location Herb spiral with compass points. Related:  Ideas for growing • gardening

A Flower Pot That Grows as the Plant Does Twin sisters Bike and Begum Ayaskan are a design duo with a focus on products and installations. In a recent project entitled, GROWTH, the duo created a flower pot with origami-based geometry that grows in size as the plant does. The duo explain: “The life cycle of a plant is a transformation, from an early seed to its full grown size; the blooming of a flower, the unfolding of a leaf, the branching of the roots. This process is what GROWTH aims to capture within a plant pot.” For more interesting designs from Studio Ayaskan, check them out at the links below. [via Bored Panda] DIY Pallet Garden; How to make Raised Wood Pallet Garden Bed 2.7K Flares2.7K Flares × Have you planted your garden yet? I have the best DIY garden project for you! A raised wood pallet garden bed! We’ve been renting our home for a few years now and I have struggled with my garden. Pallet Garden supplies You will need Wooden pallets in good conditionScissorsWeed/garden fabricTop soilStaple gun and staplesplants for planting For me the hardest part was simply finding the silly pallets! With your pallets at home and cleaned we can begin. Begin stapling the garden fabric to the backside of the wood pallet. We then begin folding the fabric up to the top of the pallet and stapling it to the top. Once you have all your pallet garden beds created, move them into place. The smaller pallets took about 2 bags of 1 cubic-feet top soil. With the wood pallet garden beds filled, you can then start planting. Then I also planted peas, radishes, green onions, jalepenos and habenaro peppers and Red Bell peppers. Do you like the look of a Pallet garden? Questions?

Ideological austerity: London fire service cuts vs huge bonuses at publicly owned banks On Thursday the 8th of January hardened London firefighters wept as their fire stations were shut down. Ten stations were closed down simultaneously in a desperate Tory attempt to save £45 million. To put this figure of £45 million into better perspective it is useful to look at the bonuses that were paid out at the taxpayer backed banks RBS and Lloyds. Despite making a £570 million pound loss, Lloyds - which is 43% owned by the taxpayer - handed out £365 million in bonuses for the 2012-13 economic period. RBS fared even worse, losing £5.2 billion (making total losses of £34 billion since the 2008 bailouts), but they handed out £607 million in bonuses to their staff. An apologist for the Tory cuts might try to deflect from the issue by asking what these extravagant bonus handouts at loss-making banks have to do with the government. More articles from ANOTHER ANGRY VOICE

How 1 MILLION Pounds Of Organic Food Can Be Produced On 3 Acres By Andy Whiteley Co-Founder of Wake Up World The quality and accessibility of our food supply is a mounting issue today. With GMOs, chemical pesticides and low-nutrition processed foods now commonplace in the mainstream supply, taking control of your own food supply is one of the smartest things you can do – for your health and for your hip pocket. So, with limited space, how can we create an independent food supply? I recently came across this amazing video of a man, urban farmer Will Allen, who has figured out a self-sustaining system that can grow 1 million pounds of food every year, on just 3 acres of land, using the symbiotic cultivation of plants and aquatic animals in a re-circulating system. If you’re interested in starting your own Aquaponics system in your home, be sure to check out our exclusive special offer to Wake Up World readers at the bottom of this page. Grow 1 Million Pounds of Food on 3 Acres * Maintaining 3 acres of land in green houses * Producing 10,000 fish Growing Power

Thrifty Alternatives to Expensive Gardening Products | Natural Gardening The following Content was Provided by www.Budget101.com "Digging yourself out of debt, when all you have is a spoon" The dizzying array of gardening products required to maintain a garden can be overwhelming. After adding up the cost of purchasing fertilizers, pH soil adjusters, and pest control products you might find it cheaper to convert to fake flowers and just get your produce at the grocery store. Worse yet, a large number of the gardening products sold in stores are harmful for the environment and make our produce toxic to consume. Some plants such as Azaleas, Rhododendrons, foxgloves, bleeding hearts, and blueberry bushes grow best in acidic soil. Products that lower Soil pH Coffee grounds,Left over coffeeExpired orange, pineapple, or grapefruit juiceVinegarPine needles My favorite flower, Peonies, along with lilacs, sage, poppies, and sunflowers, grow best in alkaline soils. Products that Raise pH Wood AshSpread ash around alkaline loving plants, bushes, and trees. See Also:

10 facts about infidelity, as divulged by Helen Fisher While talking about her research on love at TED2006, Helen Fisher mentioned the issue of infidelity. Here, she dives into the topic of cheating in much more detail. Photo: Robert Leslie Love isn’t so much an emotion, says Helen Fisher in her TED Talk. No, love is a brain system — one of three that that’s related to mating and reproduction. Helen Fisher: Why we love, why we cheatIt’s those other two systems that explain why human beings are capable of infidelity even as we so highly value love. We see infidelity on big and small screens all the time and, on occasion, we see evidence of it in real life too. 1. Further reading: Anatomy of Love, by Helen FisherThe Marriage-Go-Round, by Andrew J. 2. 3. Why We Love, by Helen Fisher 4. Nisa: The Life and Words of a ! 5. “Justifications for extramarital relationships: The association between attitudes, behaviors, and gender,” by Shirley Glass and Thomas Wright in the Journal of Sex Research 6. 7. 8. 9. 10. Anatomy of Love, by Helen Fisher Why Him?

Humic Acid's Role in Improving Soil Quality and Plant Growth The term "humus" dates back to the time of the Romans, when it was frequently used to designate the soil as a whole. It was later applied to the organic matter of soils and composts, or to different fractions of this organic matter; as well as, to complexes formed from a variety of natural organic substances. Humus compounds are complex natural organic compounds that are formed in soils from plant residues, by a process of "humification". Humus materials are complex aggregate of brown to dark colored amorphous substances, which have originated during the decomposition of plant and animal residues by microorganisms, under aerobic and anaerobic conditions, in soils, composts, peat bogs, and water basins. "Humic acid " is the commercial term often used to refer to the combined humic and fulvic acid content found in these naturally occurring deposits. Why Use Humic Acid? How Does Humic Acid Improve Soil? How Does Humic Acid Improve Plant Growth? Humic Acid's Role in Fertilization

Blueberry Lemon Pound Cake | BHG Delish Dish Written on June 24, 2014 at 7:00 am , by Jocelyn Delk Adams Hi there, it’s Jocelyn of Grandbaby Cakes, and I am so excited to share some wonderful recipes with you on Delish Dish! Pound cake is considered a delicacy in my family. It appears on every Sunday dinner table and is the cornerstone of my family’s vintage recipes. Pound cake was also the first thing I ever learned how to bake. What I love about cake recipes like this traditional sour cream pound cake is how easy it is to put your own spin on like I did with my blueberry lemon flavor combination. With these simple changes, I created a delightful cake ready for any celebration you have during this gorgeous season: First, I doubled the recipe to fill my beautiful bundt pan. Blueberries and lemon are one of my favorite baking combinations, and the pair ended up being absolutely perfect in this recipe. You definitely want to give this recipe a try! For the original recipe, click HERE! Happy Baking!

How I'm heating a room for 8p a day Rising energy bills are a hot topic at the moment. So it’s no surprise that a video showing viewers how to make DIY heater on the cheap has proved popular. The rather aptly-named Dylan Winter first posted the clip on YouTube under the name KeepTurningLeft. The journalist and boat owner says the heater is an alternative way to heat both his boat and home office. He reckons the DIY heater can keep a room warm for just 8p a day if it’s used in conjunction with the heat generated from a computer. At the time of writing the clip had 2,455,677 views. But the big question is: does it work? Setting up the heater As a freelance journalist who works at home, keeping warm is a big issue. I found I had all the components of the DIY heater already. Winter’s video shows how the tea-lights are put inside a bread tin, lit and covered with a small upside-down flowerpot. The small flowerpot is covered by a second, larger pot and the hole in the bigger flowerpot is left uncovered. My heater How does it work?

How To Grow Hundreds Of Potatoes In One Barrel | Homestead & Survival Want to grow potatoes this year? Lots of them in one barrel? Well, Timothy Hurst shares his simple 4-step method to do just that. 1. If you don’t have a 50-gallon trash barrel or a half whiskey barrel then consider the Victorian Potato Barrel, or our favorite, the Island Grow Pots. After you’ve selected your planter, then you’re ready to continue on with Tim’s final three steps.