Humans With Amplified Intelligence Could Be More Powerful Than AI 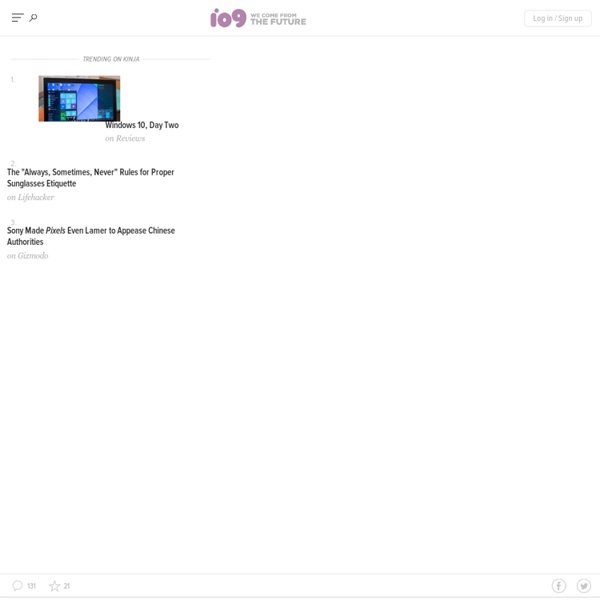 Functional 3D Brain Tissue Successfully Grown From Stem Cells The ultimate goal of stem cell research is to create functional replica tissues and organs for use as replacements in times of injury or disease, or for use in the development of drugs and other therapeutic techniques. Getting tissues to grow in the lab in three dimensions has been challenging across the board, but this is especially problematic for structures in the nervous system. Beyond getting the neurons to grow at all, they must be connected in a very particular manner in order to function. A major step forward has been taken on this front by a team from RIKEN Center for Developmental Biology in Japan, who state in Cell Reports that they have successfully grown 3D functional brain tissue that has even grown with proper patterning. The brain tissues were grown from human embryonic stem cells, and growth factors were added in series throughout development. Read this next: Richard Dawkins Reads Hate Mail From “Fans”

Digi face Designer Psychologies: Moving beyond neurotypicality Designer psychologies, or customized cognitive processing modalities, describes the potential for future individuals to selectively alter the specific and unique ways in which they take in, analyze and perceive the world. Cognitive modalities are the psychological frameworks that allow for person-to-person variances in subjectivity, including such things as emotional responses, social engagement, aesthetics and prioritization. The day is coming when we'll be able to decide for ourselves how it is exactly that we want to process our world. Most of us have the so-called neurotypical cognitive response. We know, however, mostly through our interactions with those outside of the cognitive norm, that neurotypicality is not the be-all and end-all of psychological experience. Indeed, autism is a great example of this. Society benefits from neurodiversity. From neurotypicality to neurodiversity Okay, so why do we need to reach outside the bounds of neurotypicality? The processing mind A. B. C.

Toyota robot can pick up after people, help the sick Toyota's new robot that glides around like R2-D2 is devoted to a single task: picking things up. HSR, short for "human support robot," comes with a single mechanical arm that can grasp objects of various shapes and sizes and also pick up smaller items with a tiny suction cup. It doesn't have other tricks in its repertoire, except for a computer panel on its head for surfing the Internet. Kouichi Ikeda, its engineer, is serious about using it to help around regular homes. "Although it can only do one simple task of picking up, it's already making disabled people quite happy. Nearly 40 percent of Japan's population will be 65 or older by 2060, and with the rest of the developed world and some developing nations following that track, Toyota is banking on the demand for robot helpers to grow. "People feel more comfortable asking a robot to pick up after them than asking a human helper," said Tadashi Hatakenaka, manager and engineer at the Yokohama Rehabilitation Center. One drawback is cost.

How Staying Mentally Fit Can Make a Difference | Optimum Performance Studio Your brain isn’t a muscle, but you can treat it like one Many people focus on physical fitness, but few know that brain fitness is also something you can work on. In fact, you can exercise your brain as often as you would your arms or abs--and the results can be positive and empowering. It’s helpful to think of your brain as you would a muscle. This is based on your brain’s innate neuroplasticity, or its ability to grow and change in response to new challenges. The science behind brain training Scientists once believed that your mental abilities were fixed in adulthood. The most popular of these brain training products is made by the San Francisco-based Lumosity, which employs a team of in-house neuroscientists with degrees from Stanford and UC Berkeley. Realizing that brains need more sophisticated programs and guidance to grow and change, Lumosity’s scientists work with an experienced team of game designers. Promising studies on the effects of brain training

Artificial Neurons Can Communicate in the Same Way as Human Neurons Synopsis This artificial neuron contain no ‘living’ parts, but is capable of mimicking the function of a human nerve cell and communicate in the same way as our own neurons do. Summary To date, the primary technique for neuronal stimulation in human cells is based on electrical stimulation. Intelligence amplification Intelligence amplification (IA) (also referred to as cognitive augmentation and machine augmented intelligence) refers to the effective use of information technology in augmenting human intelligence. The idea was first proposed in the 1950s and 1960s by cybernetics and early computer pioneers. IA is sometimes contrasted with AI (Artificial Intelligence), that is, the project of building a human-like intelligence in the form of an autonomous technological system such as a computer or robot. Major contributions[edit] William Ross Ashby: Intelligence Amplification[edit] .." J. "Man-Computer Symbiosis" is a key speculative paper published in 1960 by psychologist/computer scientist J.C.R. Man-computer symbiosis is a subclass of man-machine systems. In Licklider's vision, many of the pure artificial intelligence systems envisioned at the time by over-optimistic researchers would prove unnecessary. Douglas Engelbart: Augmenting Human Intellect[edit] See also[edit] References[edit]

9 Ways Humanity Could Bring About Its Own Destruction It all started with David Chalmer's various thought experiments concerning qualia and something called philosophical zombies: A p-zombie is essentially a creature that in all ways appears to be conscious, but isn't really conscious. Chalmers proposed a thought experiment where the inputs an outputs of a growing number of neurons in a person's skull are gradually routed into a growing collection of artificial neurons. The person is given a switch that allows them a to switch back and forth between their natural neurons and the synthetic ones. The person can then try switching back and forth at any level of replacement. Chalmers asks will the person at any point notice any change in their experience of sensations as they keep pressing this switch? If this would happen, if a person's qualia change, then Chalmers says we've overlooked something and consciousness is not being copied or duplicated.

A robot has just passed a classic self-awareness test for the first time A researcher at Ransselaer Polytechnic Institute in the US has given three Nao robots an updated version of the classic 'wise men puzzle' self-awareness test... and one of them has managed to pass. In the classic test, a hypothetical King calls forward the three wisest men in the country and puts either a white or a blue hat on their heads. They can all see each other's hats, but not their own, and they're not allowed to talk to each other. The King promises that at least one of them is wearing a blue hat, and that the contest is fair, meaning that none of them have access to any information that the others don't. Whoever is smart enough to work out which colour hat they're wearing using that limited information will become the King's new advisor. In this updated AI version, the robots are each given a 'pill' (which is actually a tap on the head, because, you know, robots can't swallow). You can see the adorable test in the footage from Motherboard below:

A paralyzed woman flies a fighter jet with her mind Back in February of 2012, a paralyzed 55 year old mother Mrs. Jan Schuermaan participated in an experiment led by a team of researchers at the University Of Pittsburgh School Of Medicine. The team of researchers implanted electrode grids with tiny contact points originally meant to control her arm and hand movements. With a simple computer algorithm, signals gathered from individual neurons were grouped into patterns. “Within a week of the surgery, Ms. After 2 years since the surgical implants of the electrode grids, Mrs. The project of DARPA was to control a Multirole fighter called F-35 (picture below) in a simulator purely by her mind. Surprisingly, Mrs.

Recommender system Recommender systems or recommendation systems (sometimes replacing "system" with a synonym such as platform or engine) are a subclass of information filtering system that seek to predict the 'rating' or 'preference' that user would give to an item.[1][2] Recommender systems have become extremely common in recent years, and are applied in a variety of applications. The most popular ones are probably movies, music, news, books, research articles, search queries, social tags, and products in general. However, there are also recommender systems for experts, jokes, restaurants, financial services, life insurance, persons (online dating), and twitter followers .[3] Overview[edit] The differences between collaborative and content-based filtering can be demonstrated by comparing two popular music recommender systems - Last.fm and Pandora Radio. Each type of system has its own strengths and weaknesses. Recommender system is an active research area in the data mining and machine learning areas.