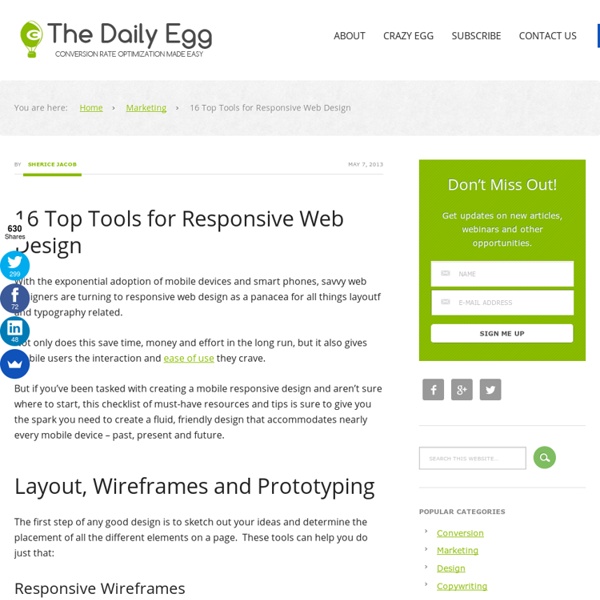 What Is Web 2.0 What Is Web 2.0 Pages: 1, 2, 3, 4, 5 DoubleClick vs. Overture and AdSense Like Google, DoubleClick is a true child of the internet era. It harnesses software as a service, has a core competency in data management, and, as noted above, was a pioneer in web services long before web services even had a name. However, DoubleClick was ultimately limited by its business model.

Créer une application de bureau native avec NW.js The NW.js project lets you create apps with full native capabilities in HTML, CSS and JavaScript. Even better, it lets you access any Node.js modules directly from the browser environment. This means your web-based app can now retrieve input from sensors or control hardware devices. This is the perfect environment for physical computing projects! About NW.js NW.js (previously know as node-webkit) “lets you call all Node.js modules directly from DOM and enables a new way of writing applications with all Web technologies”. 20 tools to help you create responsive web designs Building responsive design has become a huge trend in the web design world. There is a good reason for that: responsive websites are much more relevant than fixed web designs in a time where a lot of internet traffic comes from mobile devices. In this article we take a look at some of the most useful tool to help you with the creation of responsive designs.

Google's Guide To Designing With Empathy With a price tag that's already set records by being $1.6 billion over-budget, mass outbreaks of the Zika virus, and water-sport venues that are allegedly teeming with human excrement, the Rio 2016 Olympic Games are already looking like the biggest planning disaster in IOC history—and this, just two years after Sochi. But it's not all bad. As part of the $12 billion budget attached to the Olympic Games, Rio has built 11 new sports facilities, ranging from a whitewater water park and a bitchin' BMX stadium to a massive new tennis center and a trio of multi-use sports arenas. And unlike past Olympic games, most of these structures will be permanently integrated into Rio's urban fabric, giving Brazilian athletes, students, and the general public places to swim and play for years to come.

Bosonic Web Component Flash message Display an info message that automatically disappears after 2 secs: Show message Modal (Close with ESC) Autocomplete Splash Vector Graphics on your Responsive Site - HTML5 Rocks Creating mobile content that dazzles means balancing the amount of data downloaded against maximal visual impact. Vector graphics are a great way to deliver stunning visual results using minimal bandwidth. Many people think of canvas as the only way to draw a mixture of vectors and rasters on the web, but there are alternatives that have some advantages. 50 Free PSD UI Kits and Templates For every web designer, having a selection of pre-designed and editable web UI elements is key to organizing and optimizing work-flow. Not only do web UIs allow you to rapidly prototype multiple web pages with uniformity, they also aid your personal creativity by having each elements basic structure in-place allowing you to give each your own personal design touches. In this post we have 50 beautifully designed and editable pre-designed PSD UI kits, covering all of the major UI requirements of the modern web designer. You will find some basic kits that are perfect for small projects and we also have a huge selection of individual elements covering the more specialized areas of web design, including: Galleries, lightboxes, audio/video controls and players, calendars, specialized forms (contact, search, login…), progress bars, alert boxes… and much, much more.

Detecting and Responding to iPad Orientation Change in Adobe Edge Animate With the help of Simon Widjaja and friends’ Edge Commons Dirty Little Helpers library I have extended the Flexible Layouts Using Adobe Edge Animate and the Edge Commons Library tutorial to work on an iPad. Simon’s tutorial/demo works well on a browser when resizing and this demo takes that one stage further and uses the ‘window.orientation‘ event to trigger the resize code uses a simple <meta content> tag to ensure the device as it 100% and recognises the change in dimensions. You can still trigger the resize code in your desktop browser but this is designed to detect your iPad’s orientation too. I’ll write it up fully later with a walk-through of the functionality but for now you can just play around with it and look at the (fairly simple) code – also I thought it would be a nice start to the week! I have removed the ‘window.orientation‘ call as it is not required – even simpler!

20 Free Web UI Element Kits and Stencils No doubt every web designer has spent many endless hours mocking up web pages, and as such every designer should have a good set of re-usable and uniform Web UI elements that they can rely upon to save them precious time and spare headaches when they are in the initial stages of a web project. In this article we have 20 completely free Web UI element kits and stencils that are perfect for the initial mockup or wireframe stage of a web design project. Most of the kits are editable and the kits are in either .psd, .ai or .png format, but you will also find some Omnigraffle stencils and some kits in .svg format. So, whatever your preferred format you are bound to find the perfect kit for you. Modern Web UI Set (.psd)

HTML5 Presentation Combine both technologies to allow direct image access + manipulation Putting it together for local image reading + manipulation. Playing With HTML5 Video & getUserMedia Support You may have seen the impressive HTML5 experiment created by Sean Christmann involving a video that explodes at the click of a mouse. If not, we'd recommend that you have a look: HTML5 exploding video demo

web vtt texte timer comme sous titre ou com developer.mozilla WebVTT is a format for displaying timed text tracks (e.g. subtitles) with the <track> element. The primary purpose of WebVTT files is to add subtitles to a <video>. WebVTT is a text based format. A WebVTT file must be encoded in UTF-8 format.