The 27 Characteristics of A 21st Century Teacher 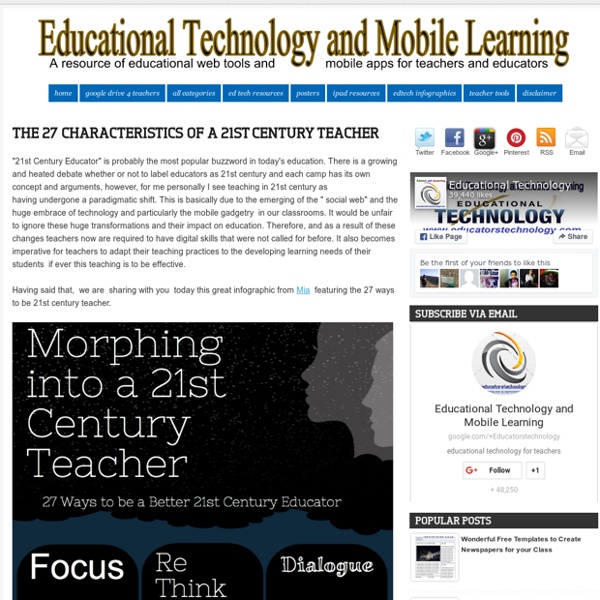 "21st Century Educator" is probably the most popular buzzword in today's education. There is a growing and heated debate whether or not to label educators as 21st century and each camp has its own concept and arguments, however, for me personally I see teaching in 21st century as having undergone a paradigmatic shift. This is basically due to the emerging of the " social web" and the huge embrace of technology and particularly the mobile gadgetry in our classrooms. It would be unfair to ignore these huge transformations and their impact on education. Having said that, we are sharing with you today this great infographic from Mia featuring the 27 ways to be 21st century teacher. courtesy of : Related:  4 Cs

Weekly Reflection: What is 21st century assessment? | Teaching the Teacher North and South magazine We hear a lot about 21st century learning in education. About how computers are going to revolutionize and personalize teaching and learning. In fact there’s even been a government inquiry into digital learning yet the elephant in the room is assessment. Last month North and South ran an article boldly stating that kids needed to take more control in the classroom from those pesky know it all teachers. Yet I often wonder if the problem might not actually be with our teaching practices but with our assessment practices. Perhaps the problem isn’t that the current crop of teachers aren’t innovative, but it is our national obsession with measuring learning that is squeezing innovative teaching practices. In an era where schools have their NCEA and National Standards results put up for scrutiny, I’m sure I’m not on teacher feeling the pressure between that amazing engaging curriculum and ensuring achievement gains as measured by standardized tests for students.

What are learning skills? | Thoughtful Learning K-12 The 21st century learning skills are often called the 4 C’s: critical thinking, creative thinking, communicating, and collaborating. These skills help students learn, and so they are vital to success in school and beyond. Critical Thinking Critical thinking is focused, careful analysis of something to better understand it. Analyzing is breaking something down into its parts, examining each part, and noting how the parts fit together. Creative Thinking Creative thinking is expansive, open-ended invention and discovery of possibilities. Brainstorming ideas involves asking a question and rapidly listing all answers, even those that are far-fetched, impractical, or impossible. Communicating Analyzing the situation means thinking about the subject, purpose, sender, receiver, medium, and context of a message. Collaborating Allocating resources and responsibilities ensures that all members of a team can work optimally.

To what extent does Bloom’s taxonomy actually apply to foreign language teaching and learning? Bloom’s taxonomy of higher order thinking skills has acquired a mythological status, amongst educators. It is one of those reference frameworks that teachers adhere to with some sort of blind allegiance and which, in 25 years of teaching, I have never heard anyone question or criticize. Yet, it is far from perfect and, as I intend to argue in this article, there are serious issues undermining its validity, both with its theoretical premises and its practical implementation in MFL curriculum planning and lesson evaluation in school settings. Why should we be ‘wary’ of the Bloom taxonomy, as the ‘alarmist’ title of this article implies? Mainly because people forget or fail to consider that the Bloom Taxonomy was not meant as an evaluative tool and does not purport to measure ‘effective teaching’. In fact, the book in which the higher order thinking skills taxonomy was published is entitled: Taxonomy of Educational Objectives: The Classification of Educational Goals. Like this:

5 tips to improve your critical thinking - Samantha Agoos History of Critical Thinking “The intellectual roots of critical thinking are as ancient as its etymology, traceable, ultimately, to the teaching practice and vision of Socrates 2,500 years ago who discovered by a method of probing questioning that people could not rationally justify their confident claims to knowledge. Confused meanings, inadequate evidence, or self-contradictory beliefs often lurked beneath smooth but largely empty rhetoric.” “He [Socrates] established the importance of seeking evidence, closely examining reasoning and assumptions, analyzing basic concepts, and tracing out implications not only of what is said but of what is done as well. More on critical thinking through the ages is available here. 1.

21st Century Skills in ELT Part 1: The rise of 21st Century Skills | Oxford University Press Shaun Crowley has worked as an EFL teacher and a marketing manager for an international ELT publisher. He is the founder of www.linguavote.com, an e-learning platform for learners of English that features social learning and gamification. Follow Shaun on Twitter: @shauncrowley In ELT we often regard our profession to be independent of teaching subjects like maths and science. In American mainstream education there is an increasing emphasis on a concept referred to as “21st Century Skills” – a collection of various competencies that are regarded as being important for success in life, such as critical thinking, collaboration, communication, digital literacy, creativity, problem solving, environmental awareness and self-expression. Now let’s be honest – it’s a bit of a buzzword, with a meaning that’s open to interpretation. In ELT terms, I would interpret 21st Century Skills as: What might that look like? Like this: Like Loading...