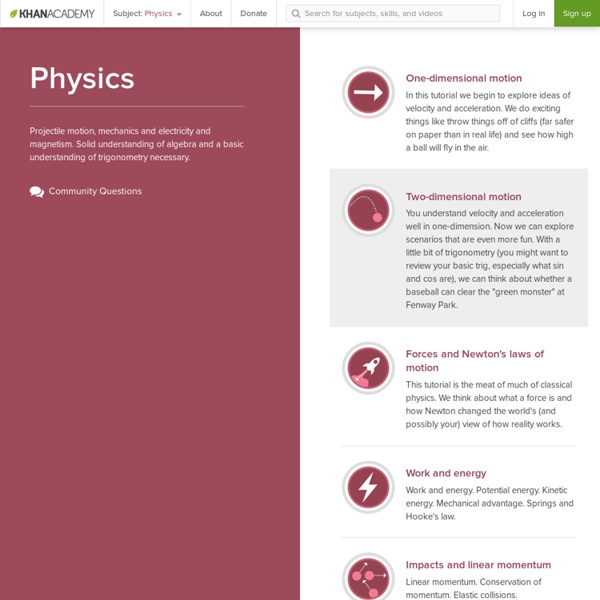 Exoplanet Exploration: Planets Beyond our Solar System: Exoplanets 101 Exoplanet– a planet that orbits another star The blocky space telescope was still getting its bearings, just a few months after launch, when the floodgates burst open. As NASA’s Kepler Space Telescope science team was wrapping up a 10-day trial run, they saw something that bordered on the unbelievable: the telescope's first detection of a rocky, Earth-sized world outside our solar system. The planet, a hot, heavy world dubbed Kepler 10b, would be among the early nuggets in a coming gold rush of exoplanet discovery—taking us from a handful of planets confirmed to be in orbit around other stars to more than 3,300 today, all in the space of two decades. Thousands more candidate planets found by Kepler await confirmation.

Motion: Laws of Motion There was this fellow in England named Sir Isaac Newton. A little bit stuffy, bad hair, but quite an intelligent guy. He worked on developing calculus and physics at the same time. During his work, he came up with the three basic ideas that are applied to the physics of most motion (NOT modern physics). Math, Physics, and Engineering Applets Oscillations and Waves Acoustics Signal Processing Electricity and Magnetism: Statics climate.nasa The world seems smaller to Steve Wofsy than it used to. He’s the lead scientist for NASA’s Atmospheric Tomography (ATom) mission, an airborne mission to survey the gases on the world’s atmosphere that has just finished up a round-the-world flight. I met with Steve in February in Christchurch, New Zealand, at a hotel an easy ten-minute walk from the international airport. The proximity was key because that's where NASA's DC-8 research plane sat amid large warehouse-sized hangars and equipment on a section of the airport run by the U.S. National Science Foundation for research expeditions to Antarctica.

Blendspace - Create lessons with digital content in 5 minutes Make mobile learning awesome! Student creation Share materials Free! Get our new app! Save time by using free lessons & activities created by educators worldwide! 10 Imaginative Science Videos for Your Curious STEM Learners If you’re looking for some science videos to flip your STEM classroom with, there’s a whole world of them on the Web. You don’t want just any old average science videos, though. You’re looking for ones that learners will actually want to watch. Science videos should do more than just inform; they should inspire.

BBC Earth Sir David Attenborough's career as a broadcaster and naturalist has endured for an impressive 60 years. His accessible storytelling has inspired generations to learn more about the natural world and brought to life all creatures great and small on our television screens. He joined the BBC as a trainee producer in 1952. BUILDING BIG: Home Page Explore large structures and what it takes to build them with BUILDING BIG™, a five-part PBS television series and Web site from WGBH Boston. Here are the main features of the site: Bridges, Domes, Skyscrapers, Dams, and Tunnels.