No, you're not entitled to your opinion 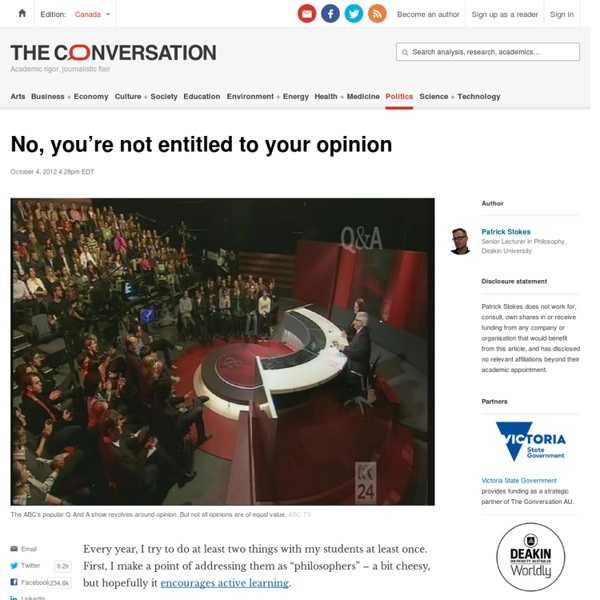 Every year, I try to do at least two things with my students at least once. First, I make a point of addressing them as “philosophers” – a bit cheesy, but hopefully it encourages active learning. Secondly, I say something like this: “I’m sure you’ve heard the expression ‘everyone is entitled to their opinion.’ Perhaps you’ve even said it yourself, maybe to head off an argument or bring one to a close. A bit harsh? The problem with “I’m entitled to my opinion” is that, all too often, it’s used to shelter beliefs that should have been abandoned. Firstly, what’s an opinion? Plato distinguished between opinion or common belief (doxa) and certain knowledge, and that’s still a workable distinction today: unlike “1+1=2” or “there are no square circles,” an opinion has a degree of subjectivity and uncertainty to it. You can’t really argue about the first kind of opinion. Meryl Dorey is the leader of the Australian Vaccination Network, which despite the name is vehemently anti-vaccine. Related:  To Whom It May Concern...

MORE TROLLS THAN A MID-LEVEL DUNGEONS AND DRAGONS CAMPAIGN | chronicles of harriet I have been the victim of trolling. Recently, a person tried to bait me into an argument, or get a rise out of me by insulting my latest book release, A Single Link, without reading it. When that didn’t work, they said they were purchasing another book that released the same day as A Single Link. Fine by me; my short story, Brood is in that book, too. Silly rabbit. No, not rabbit…troll. In Internet slang, a troll is a person who sows discord on the Internet by starting arguments or upsetting people by posting inflammatory, extraneous, or off-topic messages in an online community, such as a group forum, chat room, or blog. While trolling – the term for the discordant actions of a troll – can be accidental, it is usually done with the deliberate intent of provoking readers into an emotional response or of otherwise disrupting normal on-topic discussion. Media attention in recent years has equated trolling with online harassment and bullying. In Icelandic, þurs refers to trolls. Like this:

FRACKED UP!: Hollywood,Interrupted Visits America’s New Boomtown | Hollywood, Interrupted Three hundred miles due north of Deadwood, South Dakota and roughly half as many years past its 1870s heyday, a new gold rush is threatening to give that storied spectacle of exuberant capitalism a run for its money. In a country with an unofficial underemployment rate of 20%, the tiny railroad whistle-stop of Williston, North Dakota near the Montana border (population 17,000 and spiking) is currently at capacity: There’s not a motel room to be had in the city, housing prices are double what they were a year ago ($300,000 for a two-bedroom home), and the daily onslaught of new arrivals is reduced to living in their cars, RVs, sporadic tent cities or the rapidly proliferating “man camps” – clusters of trailers in an open field that pack in oil patch workers dormitory style, sometimes six to a room. Access to running water and simple sanitation is so rare that public businesses have had to lock their bathrooms to discourage makeshift sponge baths or the dumping of wastewater.

Here is Some Legitimate Science on Pregnancy and Rape | Context and Variation Trigger warning: discussion of violence against women and graphic mention of miscarriage. So Congressperson Todd Akin of Missouri has said some interesting things. Referring to the possibility of pregnancy after rape, and whether abortion should be allowed in this circumstance, he said according to his understanding “if it’s a legitimate rape, the female body has ways to try to shut that whole thing down,” but that, should one embryo slip through, that “the punishment should be on the rapist, and not attacking the child.” In Akin’s non-apology about his insensitivity towards the “thousands” of rape survivors each year, he remains firm on the point that abortion shouldn’t be allowable for pregnant victims, saying “…I believe deeply in the protection of all life and I do not believe that harming another innocent victim is the right course of action.” I don’t like writing about rape. Some legitimate context Think of all the illnesses and conditions that make the news regularly. But.

Dog stuck in a dog (1 HQ Photo) I received a story from Tim West this morning. He noticed a very awkward occurrence on his way to work today, “I was driving through Delano, CA this morning and I came across the strangest thing I’ve seen. I saw these two dogs trotting down the street, ass-to-ass, and I wondered what the hell. I pulled over and upon further inspection I found the larger dogs swollen and engorged penis was stuck inside the smaller chihuahua female dog. The big dog was dragging the little dog, her legs were raised high off the ground and the front paws were just sliding as she was being dragged.

How to change the course of human history | Eurozine The story we have been telling ourselves about our origins is wrong, and perpetuates the idea of inevitable social inequality. David Graeber and David Wengrow ask why the myth of 'agricultural revolution' remains so persistent, and argue that there is a whole lot more we can learn from our ancestors. Art work by Banksy (title unknown). Source: Flickr 1. For centuries, we have been telling ourselves a simple story about the origins of social inequality. Almost everyone knows this story in its broadest outlines. There is a fundamental problem with this narrative. It isn’t true. Overwhelming evidence from archaeology, anthropology, and kindred disciplines is beginning to give us a fairly clear idea of what the last 40,000 years of human history really looked like, and in almost no way does it resemble the conventional narrative. Mainstream social science now seems mobilized to reinforce this sense of hopelessness. 2. Alas this happy state of affairs eventually had to end. 3. 4. 5.

Related:
Related:  To Whom It May Concern...