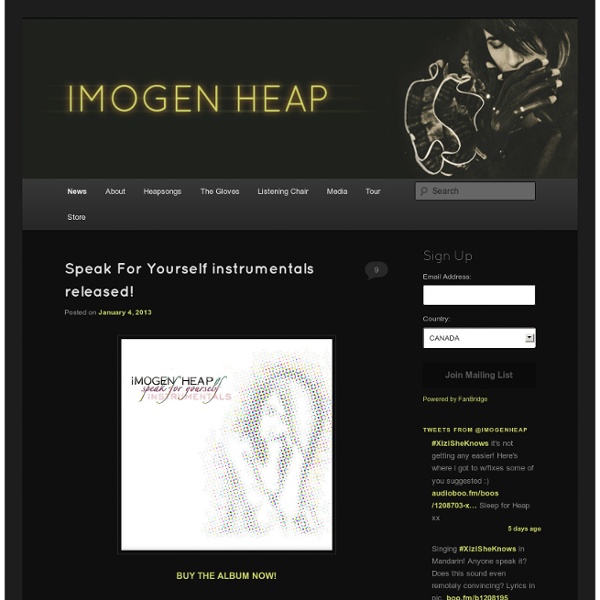 Hello there! Very exciting that our gloves are now 20% funded but we are still a way off our goal with just 27 days to go. Myself and the rest of us on the Mi.Mu gloves team have announced some rather fabulous mid-level pledges for those of you who fancy a spot of DIY (I know I do ;)! Maybe add the components to your own favourite gloves or just buy the material without the tech innards if you like the look of them? There’s also some spots to come to a workshop with us where we’ll show you how to make them, then get you up and running! OR.. if you really want a pair of gloves but just not quite yet (as these early pairs have to be expensive due to small run/ research and development and basically being hand made), you can ‘keep your seat warm’ and pledge £10 to get into the queue for the time when we figure out how to manufacture them cheaper!

The Bird And The Bee May 7th, 2013 May 16th, 2012 Recently, TB&TB Merch Gal Nikki solicited fans to send questions to Greg and Inara through the Facebook page. Here is the result. Erykah Badu Early life[edit] Erykah Badu was born Erica Abi Wright in Dallas, Texas on February 26, 1971. Her mother raised her, her brother Eevin, and her sister Nayrok alone after their father, William Wright Jr., deserted the family early in their lives. the Gloves Dr Adam Stark is the co-founder of the interactive arts technology studio Codasign and a post-doctoral researcher at the Centre for Digital Music at Queen Mary University of London. He is interested in developing new ways to create music through interactive technology. In particular, he wants to make electronic music performative and engaging to watch on stage, working with artists and musicians to integrate interactive technologies into their shows and installations.

Asthmatic Kitty Records Sufjan Stevens is a singer-songwriter currently living in Brooklyn, NY. A preoccupation with epic concepts has motivated two state records (Michigan & Illinois), a collection of sacred and biblical songs (Seven Swans), an electronic album for the animals of the Chinese zodiac (Enjoy Your Rabbit), two Christmas box sets (Songs for Christmas, vol. 1-5 and Silver & Gold, vol. 6-10), and a programmatic tone poem for the Brooklyn-Queens Expressway (The BQE). His most recent records are from 2010: an expansive EP (All Delighted People) and the full length The Age of Adz, a collection of songs partly inspired by the outsider artist Royal Robertson. Born in Detroit and raised in Northern Michigan, Sufjan attended Hope College, in Holland, Michigan, and the masters program for writers at the New School for Social Research.

Tori Amos - The Official Website Hey everyone, Check out the new Tour Dates for The Apollon Musagte Quartet, or as I call them, "The Fab Four". These were the guys who accompanied me on the Night of Hunters Tour. Check them out if you have the chance! Tori on World Cafe Posted January 13, 2012 Imogen Heap on Spotify Play / Pause I have Spotify Imogen Heap The Duckworth Lewis Method On paper, a band and album created around the concept of cricket has the sound of something rather niche, hardly universal, and perhaps a little tongue-in-cheek. Clearly their love of the game was very genuine but the greatest thing about The Duckworth Lewis Method was its ability to truly strike a chord beyond the boundary of the cricket field with brilliantly crafted, clever pop songs that were accessible to anyone whether or not they knew their LBW from a googly. This applies even more on the band's second inning, Sticky Wickets. It's quite a challenge for Hannon and Walsh to come back with fresh ideas after pouring what appeared to be every ounce of cricketing history and folklore into their debut. The result, I'm sure, of many a conversation over the years that finally came to fruition, they left very little behind.

List of baroque pop artists Baroque pop is a pop and rock music subgenre which originated in the mid-1960s in the United Kingdom and United States. It originated as a fusion of early pop and rock music, specifically rock and roll, with classical music, most specifically that of the baroque and classical eras. 1960s artists[edit] The Beach Boys Recent baroque pop artists[edit] Frou Frou A collaboration between musician/vocalist Imogen Heap and producer/arranger/songwriter/musician Guy Sigsworth , Frou Frou manufactured an impressive brand of vocal-driven, electronic pop formerly the exclusive territory of Björk . The British duo had been collaborating for years without a record deal, and after what must have been countless hours matching Sigsworth 's studio finesse and trickery with Heap 's breathy yodel, the group's debut, Details , was completed for American release on MCA Records in 2002. Heap and Sigsworth first worked together on "Getting Scared" from Heap 's 1998 solo record iMEGAPHONE . After completing the promotion for that splendid debut, Heap was ready to begin work on a new project and the two hooked up again as Sigsworth had privately been compiling music specifically for Heap while producing other projects.

Green Gartside: The brainiest man in pop (apart from Brian Eno) Any touring band is used to fans who turn up backstage with old singles, photographs and bits of ephemera to be signed. When Scritti Politti toured America for the first time in 2006, as part of their first live dates of any kind in 26 years, something different would happen. Earnest young men would approach Green Gartside – since 1977 Scritti's singer, songwriter-ideologue and sole constant member – and show him their published works of philosophy, claiming that they owed their interest in critical thought to Scritti's music. "The ratio of tactically deployed pop banality to smartarse references to Kant and Gramsci was occasionally uncomfortably high," admits Gartside of his band-cum-vehicle's commercial zenith in the mid-80s, when hits such as Absolute and The Word Girl snuck such subjects as unconditional reality and semiotics into the pop charts. "I still look for disorienting moments in pop," he says.